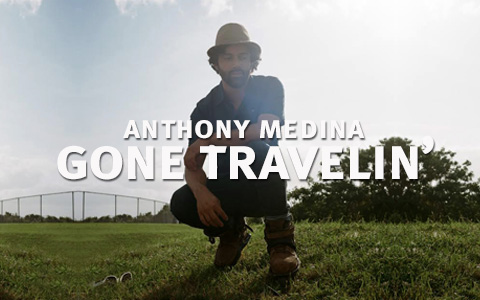 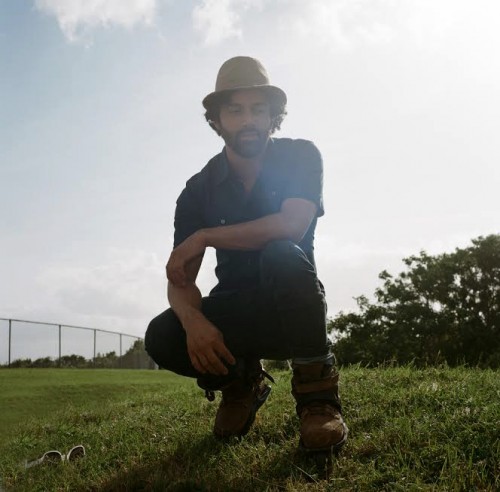 There’s a guy from Texas you may have heard of before, a guy named Anthony Medina. Though to most, he’s known by his online handle of “Nameant” or just “Ant.”

Anthony’s a guy that puts time into documenting his friends on their blades, and focuses on getting his piece on the regular, too.

This summer he packed his bags for a big ol’ European mission, which he finds himself amidst as you read these words.

Before leaving town Chris Duke caught up with our bud to get the scoop on the past, present and future. So here’s a little more about Ant.

I understand you’re going to be traveling to Europe this Summer, how did that come about?
Over the last few years I’ve watched my good friend Josh Glowicki travel Europe (among other places) nonstop. After we filmed Dag Days together he’s just been one of the people I look up to — on and off the blades. I’ve always been envious of how much he travels and I wanted to do something like that. All of 2013 I spent traveling around Texas. My free time was 100% my free time, you know? There is nothing keeping me from doing whatever I want. Not that being in a relationship sucks, but there are just certain freedoms you can only have when you’re single. So after traveling so much in 2013 my goal for 2014 was to do it again, but in Europe. 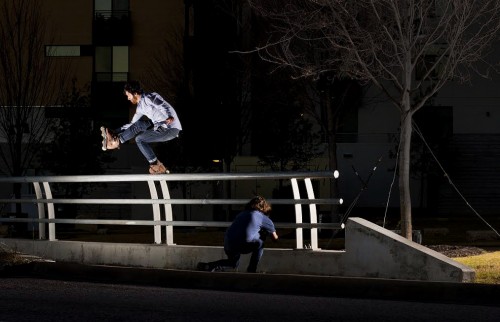 What are some of the places/ events you will be hitting?
I’ll be flying into Berlin for Summerclash, then off to Roskilde and then Sweden for my friend Fred’s comp at Zero One Six. Nils has a comp the 2nd weekend in August that I may attend. I’m buying a one-way ticket so how long I stay depends on how long the money lasts. I don’t want to come home broke because I’ll need to find a job and a new place to live. The thing I’m most excited about beyond just traveling with friends and seeing new places is the fact that every day I wake up I can essentially do whatever I want. As adults, once you graduate high school or college, summer is no longer summer. Most of us have to work year-round, so those long vacations you had when you were younger no longer exist. I can’t remember what it feels like to wake up and have nothing “to do” day after day after day. I’ve never had more than 10 days off in a row since I graduated high school.

I didn’t want this to be a one- or two-week deal, so I had to do a lot of planning for it. I rented out my house and moved in with my parents to save everything I could. They’ve been super supportive of the whole thing. I’m putting everything into this trip but I know it’s going to be worth it. I don’t know how much longer I can skate at a high level and for those that know me, they know I’m not the kind of guy who is content doing a few souls and royales here and there. I like to skate hard when I skate. So in late May I’ll be putting in my two week notice at work and traveling to Atlanta for the A-Town Stomp, then off to Europe with the homies.

Did I see you iced your ankle while filming with the GC crew?
Yeah, it’s actually a lame story. When I got the black Richies for some reason the padding on the inside of my left ankle rubbed a lot. I figured they would just break in, but after like a week skating them like that, in pain, I looked down one day when I was barefoot and saw how swollen that bone had gotten. It hasn’t gone away since.

It’s soft sometimes, so I figured it was fluid buildup. Doc is dumb as fuck though. I just want it to go away. Nagging injuries are the worst.

I hear ya, naggers make me sick. Do you think this will affect your trip at all?
No, it shouldn’t. I think with the time off it should go away. I can skate with it… I just have to ice it afterwards.

Who all came to Texas? What has it been like filming with that crew?
First it was Joey Egan, Nils, and Fredrik Andersson. The Ground Control tour was built around Fred joining the team and Nils being in town. Joey skates for Kaltik but he was in Dallas to visit so he came along for the tour as well. A couple weeks later Josiah Blee and Kato flew into Dallas to film for a Remz edit. They came to Austin as well to film. I was more just “along for the ride” with the Remz doods. I helped film here and there but was mostly just there to help be a guide and hang with the homies. The GC Tour week I was THE filmer so I was obviously responsible for a lot more.

Filming with all of these new people is great. In Austin right now there is a big divide between those who film, and those who just blade for the fun. There’s no problem with that, we all love each other, just making a statement. Since Waterloo wrapped up, most people have just been chill blading and not really into the filming grind. Mostly I’ve just been filming with Andrew and Mason consistently. Learning and understanding a skater’s habits, their process of getting a clip, and learning how to work together is awesome. Filming Nils is a lot like filming Glow so it was easy to transition. They’ll just chill and chill and chill until something catches their eye and then they’re like “Yo, I’m gonna do this. You ready?” and it’s usually laced within five tries. This was the first time I got to film with Carson as well and it was awesome to see how much of a perfectionist he is. He’s completely blunt about his skating and I love that, because I’m the same way. I only filmed Josiah for one trick but I have a new-found respect for that kid. You watch edits online and regardless of how difficult the tricks are you don’t know if it was first try or 100th try. Josiah laces shit with ease, a lot of ease. 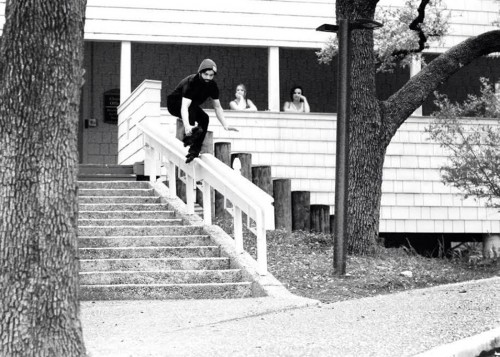 Coming from another filmer, it’s sounds like you are getting spoiled!
Ha ha I definitely got spoiled over these last few weeks, getting to blade with such talented bladers. Now that they’re gone I think those of us that do film here kinda feel this emptiness, because we got so used to being around those doods. It’s a huge difference when you’re filming two or three doods as opposed to filming nine or ten, because no matter where you go rolling, when you’re that deep in talent, shit is going to go down. Luckily I got this little taste right before I go to Atlanta and then Europe. So making new friends and blading with new people is going to be a reoccurring theme this summer.

You’re definitely no “slouch” when it comes to filming and editing. Who helped you get to that place?
I guess I always had the itch to film, but around 2001 I started to focus more on filming rather than pushing my own skating. The first person that made me want to produce videos was Jan Welch. When I was first “accepted” by the best bladers in Austin I met Jan and what he was doing was so amazing, it influenced me to want do it as well.

As I became closer with everyone, Lonnie was the one dood I really wanted to pattern myself after. I’ve always loved his style. I feel like I do my own thing now but those two were the ones that got me started and taking it seriously. 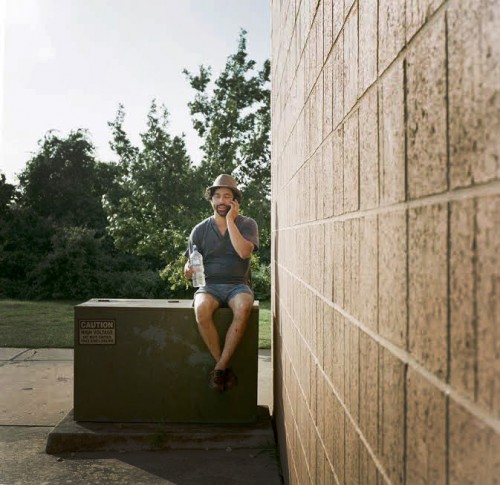 Anything you’d like to say before you head to Europe?
Four days away from leaving Texas for the foreseeable future and I’m realizing how much I’m gonna miss my blade family here. To all my friends in Texas, I love you all so much. Every one of you. Thanks for always pushing me and encouraging me to do dumb shit. If you know me, you know I’ll always put my friends first and to put a smile on their face is the reason I do this.   Thanks to you and ONE for taking the time to do this and always showing me support as well. Last but not least I want to thank my family and mostly my parents for helping me make my Europe travels a reality. You’re seriously the best parents I could have ever asked for!


Medina thank you so much for taking the time to talk with us, and we look forward to see what you churn out from your summer adventures!