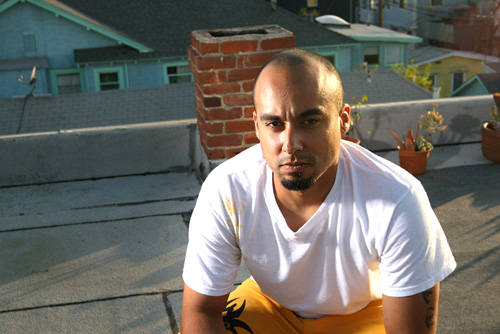 In an industry as small as ours, it’s important for everyone to do their part to help us grow not only as an industry, but as a culture. Blading pioneer and LA All Day Contest Series co-founder, Carlos Kessell, is someone who does more than his share, all day, every day! The LA All Day contest series really is an awesome event that not only promotes rollerblading from the grassroots level, it gives skaters of various skill sets a chance to compete and helps them gain some much sought after exposure. Saturday, July 25th, the contest will take a trip from its home at the Santa Monica Boys and Girls Club in Los Angeles to sunny San Diego. In preparation for the first ever SD All Day contest at Chula Vista Skatepark, ONE thought it was a good idea to speak with Carlos to get his thoughts on blading and to learn a little more about SD All Day. So, here’s the first-ever (yeah, really) Carlos Kessell interview. — BK

Carlos, thanks so much for taking the time to speak with us. Why don’t we start things off with you telling us a little bit about yourself. Who is Carlos Kessell?

Well, let’s start from the beginning. I was born in 1978, most likely conceived in a 1970s yellow Dodge van with a pull-out bed in the back. I grew up all over SoCal, from LA to Rialto. It wasn’t until I moved to Chino Hills that I discovered rollerblading. I grew up skating with Alex Miranda and the Stutzman bros; they were actually the ones who pushed me to skate. Then I hooked up with Hardline, Bauer and 4-dub, those were my sponsors throughout the years. I’m now 31 years old; I live in Venice, CA. I’ve been living here for six years. I work at Crossbow USA, where we design and manufacture electric powerboards. I’m also a graphic designer by trade, where I freelance from time to time… and, I’m a student. So, I guess you could say that I’m trying to keep busy these days. But my real passion is LA All Day and rollerblading.

Contests like LA All Day really enrich the culture of rollerblading and bring the scene together. What made you and Tracy want to start doing these?

Basically, you said it. We noticed that the scene in LA was somewhat segregated. There was nothing bringing people together, everyone just skated with their own crew. Since LA is a huge market, we knew that we could make something happen. Tracy runs the Boys & Girls Club in Santa Monica, and he was organizing contests for the club members. That’s when Tracy and I sat down and decided to organize a street comp. This was not with the B & G club, this was our own venture, and it worked out great! The next year we had our first LA All Day contest series.

How many years has LA All Day been going on?

We started out with one street comp in 2005, and in 2006 we started the first LA All Day contest series. So we’ve been going strong now for four years, and still rollin’!

Normally this contest takes place at the Santa Monica Boys and Girls Club, what sparked the move to Chula Vista?

Well, we’ve been playing with the idea for over a year now. We wanted to expand and hit up different cities, but it needed to be the perfect situation for us to do that. Then, Justin Eisinger put us in touch with Aaron Churder who runs the B & G Club in Chula Vista, so there’s the perfect situation! I’m excited to see what happens, one thing I know is that the park is sick and San Diego goes off.

The scene in San Diego is one of the biggest and fastest growing in the country. Not to mention, the city is home to many of rolling’s top bladers and biggest companies (Including yours truly, ONE blade mag). Are you expecting a big turnout?

That’s a good question, I really hope there’s a big turnout… obviously. (laughing) Um, over the years we’ve gained a lot of followers in the LA Area, especially Tracy’s little soldiers; you know, the beginner and intermediate divisions are made up mostly of Tracy’s club members. So, with that said, I think we will get a bigger turnout with the Advanced and Elite Divisions. This will be a good test for us. Who knows what could come out of this… and by the way, the only other city that has better Mexican food than LA is San Diego! 🙂

Topsoul while Alex and TJ Webber look on

A great deal of companies sponsor this event, do you think it is important for presenting sponsors to actually attend the contests that they sponsor?

Of course, we encourage it! We obviously want our presenting sponsors to be a part of it as much as possible, although we realize that they can’t be at every comp. Still, part of what we do is promote our sponsors, so if they dont come through we represent for them. Anyways… they do a good job of making sure that they’re represented at the contest by sending their skaters to compete, or a rep to promote their brand.

One of my personal favorite aspects of the contest series is that skaters of all different age groups and skill levels get a chance to compete. It’s fun to watch the beginners tackle the course and then by the end of the day as the elite skaters hit the park, I am once again reminded that rollerblading has absolutely no limits. Yet, unlike many other contests of this caliber there is no “PRO” division, why is this?

Hmm… well, I guess the main reason is that we first started by focusing mainly on ams and our objectives haven’t really changed. It’s not like we don’t want to, because we’ve talked about it, ya’ know. It’s a whole new comp, once we decide to add a pro division there are a lot more factors in organizing an event and really, we set out to promote the youth so we can establish the future. Honestly man, it’s more rewarding to throw an amateur comp, especially for the little guys, they get so stoked! So, who knows, you never know where this path will lead us…

Carlos, you have been involved in rollerblading since the beginning and have seen the sport through its many stages. Yours and Tracy’s basement museum is living proof of this. What are your thoughts on the current state of things and what was your favorite “era” of blading?

When we wore baggy pants, green skates, and were rockin 4-dub grindplates! (Laughing) I’m going to say what most old school skaters would say, and it would be from 1995 to 1999. When we had NISS and ASA, we had skate companies popping up out of nowhere like Fila and Bauer. We had tons of TV coverage, big money sponsors and skaters were actually getting paid. Obviously, I’m biased because that’s when I was in my prime. But on the other hand, there are a lot of things that I like about our culture nowadays. Now that the big money is gone, and there’s barely any TV coverage, we’re basically on our own. We are all grown up and it’s up to us to define our sport. The level of skating has grown out of control. It’s only a matter of time ’till rollerblading blows up again and we’ll be in the forefront. I look at rollerblading in a whole new light now. Since we went underground, our image has changed. We no longer look like skateboarders or bikers; we have our own style, our own culture, you know what I’m saying? We’ve established who we are. We have the foundation and it’s time to build up!

Is there anything that you think rollerblading lacks or could improve upon?

Yeah! Skaters need to wear pants that fit, PLEASE! (Laughing) Lets see… I think we need more comps, clinics, shows and demos. Kinda like Tracy White’s skate clinics; he teaches rollerblading at local schools. I think we could improve upon that. There are a handful of people who brought their skills to the table as far as promoting the sport and getting it out there for people to see. That’s just one way to help rollerblading grow. I also think that we need more of our skaters going to school, getting an education and getting a good job so that they can put money back in to the industry. Ya know what I’m saying, start a company, pay some skaters… we need engineers to design skates, we need artists to create our designs, we need directors to make skate films. We need reporters just like you, Ben. Ya know, bring your skills to the table!

While browsing around the LA All Day website, I noticed a link to your personal portfolio and discovered that you came up with many of the contest’s promotional logos, flyers, and designs for the T-shirts. Is art and graphic design a pretty big part of your life?

Yeah it is. I worked as a graphic designer in the advertising industry for about 5 years. From 2002 to 2007, and I really never ventured out of the corporate style of designing. Not until a few years ago, when I went back to school and took a lot of drawing and design classes. I started backwards; I was a graphic designer before I was taught how to draw and paint. I think that’s where my style differs from most. The Bladehead logo is probably my greatest creation by far, mainly because I’ve put this logo to use more than any other. Ya know, you’re a Bladehead, I’m a Bladehead, it also has a lot of meaning. 🙂

Before we wrap things up, is there anything else that would like to get out there, anyone you’d like to thank?

For sure. First off, I’d like to thank ONE mag for interviewing me — ego booster for sure — thanks! 🙂 All of our presenting sponsors: Rat Tail, Rollerwarehouse, ONE, Jin Joint, Valo, Themgoods & The Santa Monica Boys & girls Club. All of our sponsors who sent us prizes like; Integrated, Denial, SDSF, Razors, Skatepile, Fifty-Fifty, Ground Control, Eulogy, Vibralux, Rollerblade, Intuition, Remz, Six Won Six, AIL & England… OK, that’s all the sponsors. Now, I cant forget about the people who supported us over the years, like all of our judges: David Jones, Sean Tabone, Aaron Durand, Jared Adams, Dave Paine, Mike Opalek, and Rob G. Sorry if I missed you. Big thanks to DJ Doesha, Matt Mickey, Aaron Churder @CVS, Fiesta Bravo for the best fajitas in town, and of course Tracy & Heather White, Kessell Family, My girl, You, MJ R.I.P., and anyone who has been to an LA All Day event… Thanks. Oh yeah, Rockford’s 100 year celebration, Bearing & Bruises contest on August 9th, 2009. Check it out! And of course, what you have all been waiting for, the SD All Day contest on July 25th, 2009 @ CVS, go to LA All Day for more info. I guess that’s about it, mang!

Carlos, thanks a ton for sitting in front of your computer screen and answering these questions. LA All Day is always a great time in Santa Monica, and I can’t even wait to see what will go down in San Diego next weekend. You and Tracy really do a lot for the kids and I know they truly appreciate it. Thanks again, I will definitely be seeing you on Saturday. — Ben Karris

Hardline biggup up pimp flava! Much respect to Carlos for holding it down like G, and much respect to Tracey and LA all day! I still havn’t logged my 50 mile blade trek to LA Allday with Ariel, but it will be up soon!!!!

oLd skool killin it on the streets>>>

you got time under yoo