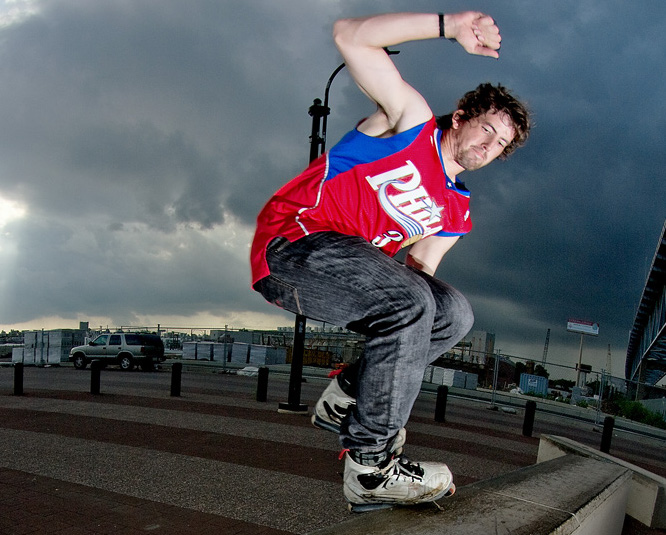 Written by ONE Staff - Published on Wednesday, September 9th, 2009

What’s your name and how old are you?

My name is Steve Iacono, and I am 24 years old.

Where are you from?

When did you start blading?

I started blading around 1997, and skated in front of my house for like 2-3 years.

How did you get the nickname “Alf”?

“Alf” was my favorite show when I was little, and for some odd reason they used to always re-run TV shows from the late-’80s era, but they would never show “Alf” on TV. One day I was out complaining about how it wasn’t re-run like “Happy Days” and “The Wonder Years,” and I had really messy hair, and one of my friends says, “With that haircut you look like Alf.” And he started saying it and it kinda caught on pretty fast.

What skaters do you look up to?

Good question. I always loved watching Sagona, Latimer, and Shima skate; basically anyone who paved the way for what it is today.

You lived with Killgore (don’t know if that’s still the case since you moved) for a long time, and Jon Jon has been there too. Got any wild stories or funny tales about those times?

Wow, I don’t even know where I could even start with that. Our house was a non-stop skater house 24/7. People from all over stayed with us all the time, for weeks at a time, which was pretty incredible, to have such a variety of people to skate with at all times. One day though I won’t forget, Jon Jon had come home from when he had a job and woke me up like in panic mode. (I had worked an overnight job at this time) He was like, “Dude what the hell did you do to the living room?” And of course I was yelling at him to let me sleep, but I went downstairs and the whole place was in complete shambles. I mean all the cushions on the furniture were flipped over, drawers were opened, Killgore’s dog was locked in Jon Jon’s room, and at the top of the stairs was a skateboard — just sitting there. Jon Jon also said he thought I was in the kitchen when he walked in, but someone had taken, like, a hammer or something, and ripped the door open and robbed us. We had three video cameras in bags in the living room, another bag with so much in photo stuff inside, and all of our computers… Nothing got taken; whoever broke in just broke in and made a big mess and I slept through the entire thing. We could have a reality show just on that house to be honest, way too many stories.

What kinda shit from non-bladers do you have to put up with in Philly?

You get the occasional “Rollerblading sucks” or “Hey, Tony Hawk” from all the kids in the hood spots but it’s really not so bad. It just seems like people don’t know what it is anymore.

How often do you get out of the city to shred?

Every so often. I have been fortunate to travel a lot this summer with everyone and it’s always great to skate new spots and be seeing other places.

Where’s the best cheese steak in your town?

The question everyone asks when they come here. It’s a toss up between Jim’s and City View, which is a little pizza shop in Center City that makes the best buffalo chicken cheese steak, you just can’t deny it.

What one sponsor (non-blading) would be the best to have?

Wawa food market. Seriously, imagine free sandwiches of any kind, made fresh, that are amazing, with the best drinks made by Wawa ever. If I could get lemonade iced tea for free for the rest of my life I don’t know what I would do. Be incredible. Seriously, Wawa could take over the world.

You rock Nimh blades. What do you like/dislike about them?

I love Nimh. They are skater owned which everyone should support for one, and two, they fit my foot perfectly, have the best liner, and the soul plate is just key… and they look great. What more can you ask for to swag out in ?

Philly of course. 🙂 But other than Rat Tail, Denial and Neglected Truth, Them Goods seems to be pretty on point with their stuff, I always enjoy their stuff. It makes you feel proud about rollerblading.

What about who’s doing things wrong?

Ha. I’m not gonna name any companies, but the ones that shy away from what rollerblading really needs rather then what is hot now. To be brutally honest, there’s a lot of things in rollerblading I would not be so sad to see just go away, and it blows my mind how some of the legends in this sport that we need to stay around, and need to keep the growing of our way of life, are just pushed out of the way or made irrelevant. In a way it threatens our sport.

If you could go one place in the world to blade, where would that be?

Barcelona, Spain. I know it is cliche, but I have never been to Europe and that place apparently is a Philly skater’s paradise.

Random Alf fact we should know?

I eat fast food everyday. No complaints though.

What’s the most progressive shit you’ve seen recently in blading?

As far as trick-wise, obviously the illusion-into-anything is pushing skating hard, especially the way stuff I’ve been seeing it done on and Montre and Jon Jon. Video-wise, “Truth 2.” Shit is next level in production.

Which would you rather do: sit in school all day, or sit at work all day?

I passed on the school thing and feel the same about work at this point, but at this point it looks like work, unfortunately.

Anything else you want to say to people?

“Life moves pretty fast. You don’t stop and look around once in a while, you could miss it.” — Ferris Bueller.

hell yeah, alf has always been a great skater, knows his shit!

Good goin boys. Liking this one just cant really find a reason for Alf to not step up his game. Think about the buffalo chicken cheesesteak. Alf, you love to eat those joints just like you love to rollerblade, my question is why haven’t you taken a bit more time to help promote your sport to the inner city youth?

Not a complaint just a motivating bit a inspiration. Alf, your the man and you know it now figure out a way to raise enough money to get our sport on the cover of Maxim Magazine.