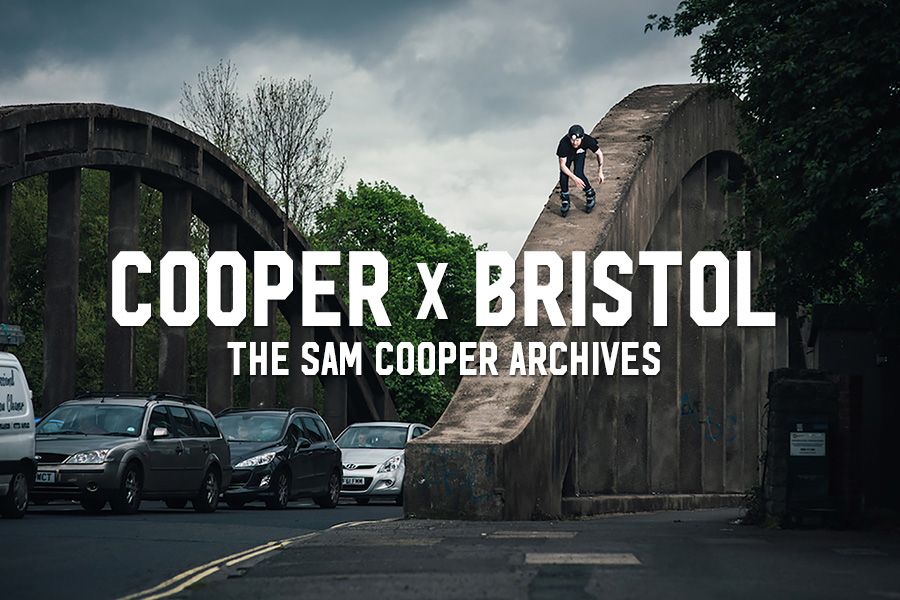 Each of us has a blade history that’s full of shared memories amongst friends, victories public and private, tricks that got away, and a sense that who we’ve become a bladers is often shaped by the places and people we surround ourselves with. The same is true of photographer Sam Cooper, who has used this unexpected time of reflection and isolation to dig through his photo archives, dust off a few old remembrances, and put together a story about just how important the city of Bristol — its spots and skaters — was to his interest and infatuation with rollerblading. It’s a story that takes place in the UK but is applicable to skaters everywhere. So check it out and then tell us your stories in the comments.

During my younger years growing up as a rollerblader in the fenlands of East Anglia, I always felt a huge draw to the city of Bristol and its booming scene. In the early to mid ’90s, Bristol was one of the key cities in what was a very healthy UK rollerblading market. Its flourishing scene of trail blazing skaters guaranteed media outlets were stacked with both great and continuous content over the years. From the hallowed pages of Unity, DNA, and Freenation magazine, to the countless videos that were being released, Bristol made its stamp on blading in the British Isles. Getting to see UK legends like Guy Crawford, Douglas Peel-Yates, Al Roberts, and eventually the BHC collective run amuck around a city that was clearly suffering from an ongoing identity crisis, had a huge impact upon me. The geography, architecture, and culture were all so foreign compared to my small market town upbringing. These vast differences from all that I knew were in equal measure intriguing as they were exciting.

The infamous Tequila Hammers and the Show Your Shit street contest, both held in part at the Picturesque Big Lloyds Ledges, were like targeted propaganda for my young mind. They fed my growing obsession with how cool and almost flamboyant it was on the Westside. The years passed by as they tend to do and despite my interest it wasn’t until I was in my early twenties that I finally got inside the city that had haunted me as a teen. Though only for a long weekend, it was in some ways a life-changing trip. During my guided tour of the city’s wonders, filming extraordinaire Ben Sach, I had an epiphany. My then developing affection for Manchester was put on ice as my earlier interest in Bristol began to develop into a love affair that I’m still consumed by to this very day.

Fast-forward three years and with a move down to Devon under my belt I was now one step closer to the unofficial capital of the South West. Bristol was now close enough to consider for any of my weekend skating plans and that was enough of an excuse for me. I hit the ground running, making the most of every chance to get there with various members of a South West scene that had welcomed me with open arms. This is the point where I believe the modern rebirth of the Bristol blading scene began and although a number of people were instrumental in the reboot of the scene, personally I think a young Niko Salaman was truly at the very core of it all. Niko at the time was only just beginning to fulfill his own potential as a rollerblader. I like to think that it was his infectious desire to skate that drew people to Bristol from far and wide; or maybe it was simply the fact he couldn’t drive yet and we all felt a bit bad leaving the poor lad out. Whatever the case the South West scene was starting to boom again and Bristol was at the heart of it, creating a buzz about rollerblading in the city once again.

From the Southern reaches of the country myself, Matt Smith, Chris Leaver and Mark Worner would make regular trips to skate, while Gloucestershire provided Matt Brown, Si Coburn, Sam Davies and Ollie jones just as regularly. Beyond that the lads from Weston would occasionally bless the city with their presence, as would those mad Welsh boyo’s. The city was once again becoming a Hub for the South West, regular faces held it down during the week while the weekends were littered with visitors from all over the UK. On a number of occasions I remember having chats with a few of the guys who were a little longer in the tooth. We discussed old times and the power house that the Bristol scene once was, leaving them to lament over how things were “back in the day.” Quite funny considering we were all blissfully unaware that our collective efforts were beginning to build the scene back up to its very best.

You would think that a city with such deep heritage in the sport would suffer immensely with spot fatigue, yet Bristol’s ever morphing face has meant that the landscape never stays the same for too long. Between the old cobbled streets, the striking brutalist architecture, and all the modern developments lies many great challenges for those on eight wheels. But that doesn’t mean they will be there tomorrow. It’s both a gift and curse. In the long term it’s meant the city has remained fresh and exciting. Rollerblading’s own inner redevelopment has also played into the hands of city’s longevity. New spots are always exciting but old spots can also be equally as exciting when new doors of perception are opened giving all the chance to have a refreshed way of looking at how to use obstacles that they once may have thought to be conquered.

With all this fresh terrain you can expect some fresh faces. Matt Woods, the UK’s most underrated blader, made the city that housed him as a student his home again. Lee Doig seemed to appear out of nowhere but was instantly a pivotal figure in the scene. Each and every weekend he would round up the troops for a skate with almost militant precision and all of this despite the fact that he nearly always had been on some kind of a mad bender the night before. International arrivals only added to the rich diversity of the scene. The Polish pair of the stylish Radek Kojtych and the hilariously funny Wojtek Letynski brought with them their own unique styles and even more personalities to the bubbling cauldron of bladers that Bristol had become. It was around this time that I finished what was my own personal pilgrimage by finally moving to Bristol and right into the heart of the action. It was a really exciting time to be a rollerblader in Bristol.

For a number of years Bristol continued to grow and thrive. During the winters we all ground out sessions on the many outdoor skateparks, occasionally having to duck into some of the undercover DIY spots when the rain would attempt to stop play. These colder sessions where nearly always punctuated by the Matt Smith sponsored post skate roast request, although this tradition soon began to transcend all seasons. The summer brings with it great sessions in the sunshine while enjoying everything about a city that truly comes alive at that time of year. The city explodes with a plethora of festivals and events that are all based around all the good things in life; food, drink, music and culture. Personally I find that the famous balloon festival is my favorite summer weekend to find myself in Bristol. There is undoubtedly something very cool about cruising around the sun soaked city with the bluest of summer sky that’s littered with literally hundreds of various hot air balloons. The summer times can quite easily fool you into thinking that you are no longer in a city in the South West of England but instead in a very hip cosmopolitan city in mainland Europe.

During this period the scene was captured and frozen in time through my own work and by lens man Mark Worner. Much like myself, his strong work ethic meant he struggled to put his camera down at the very best of times. Fortunately for him (and his much-coveted clip vault) this literally was the best of times. Mark’s own skating was resigned to his customary twenty-minute backward burns around the last skatepark of the day. His work went on to develop the “Best Before” project. His mini edits and Instagram account remain a showcase for rollerblading in the South West of the country. As the core of the scene, Bristol played a huge part in this video. Whether it was the quirky graffiti covered spots skated or the people featured in it, the video had Bristol and its scene featured heavily throughout. The Best Before video is a beautiful celebration of a scene hitting its peak and making good on that, but like all good things they must come to an end.

This is not a story of a scene that is currently flourishing; unfortunately it’s almost the total opposite. Things change, people grow, many moved on to other parts of the country and even the world. Some had just lost the love, while others struggled with the growing responsibilities that life brings. It’s not all doom and gloom though, this story is actually one of regeneration through the ages. I was blessed getting to be a part of Bristol’s recent boom, but this is only a small part of the continuing cycle that has been going on since the early nineties. I was inspired by what happened here as a child in those early days. As a young adult I was lucky enough to became a part of its modern boom. I can already see the sprouts of new generation that will grow into its future. My only hope is that the next explosion in my favorite city will coincide with an overall growth of rollerblading that will see it firmly back on the pedestal it once procured. I can dream, cant I?

Photos and words by Sam Cooper