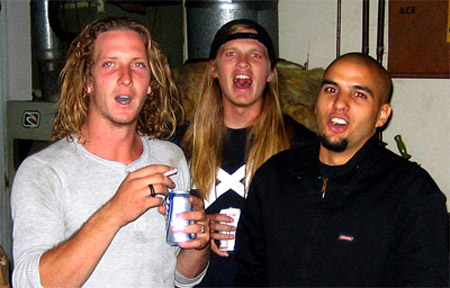 ON THE INSIDE: Surviving Santee

Our friends from Phoenix were in town to handle some business blading with the Santee crew, so we made sure to put in some “quality” time with everyone. James Johnson, Mike French, Brad Magnuson, Nick Wood, Damien Wilson, Jeremy Stephenson and some others were hanging out in Damien’s garage, which is where we ended up. Notorious for getting crazy, we hate to report that our night in Santee was relatively tame, but we think it’s because they’re saving their energies for the upcoming video FILTH. Check out more from our night in Damien’s world.

We showed up and Damien was sitting like a king in his wheeled throne.

Jeremy Stephenson was tagging along with the Revolution crew getting clips. It was good to hang out with Jero ’cause it’s been awhile. Can’t believe he lives on fraternity row in Lawrence. All those frat guys… yikes!

After saying our hellos Damien gave us the tour. Notice in this pic that he likes hats and framing pictures of his friends from the blade mags. I don’t know what he’s showing Wes, but it looks like a cross between a deer antler and some dried-up bull cock.

How often do you think a guy with swords on his headboard gets laid? It’s either every damn day or once in a blue moon. Props to Damien for being able to disembowel a bad lay.

Damien is so hardcore he has an air compressor on the floor of his bedroom in the ready position. Is it for the nail gun or rapid filling a bunch of blow up dolls? We were afraid to ask.

This is Robbie Whitcomb. He and Damien have had a long-running long-hair contest. We think Robbie won- and puts most chicks to shame.

Nick started announcing some blade contests and now the guy is obsessed with hosting, announcing and just hearing himself talk. Which is okay, since most of what he says is either hilarious or terrifying. Ask him about getting pulled over a few nights ago. That one’s a doozy.

Shane, who recently moved to AZ from FL, rocks the ultra-fly head gear, and Mike gives him one of those “I’m the star in this photo, bitch” smirks. Can you believe this French guy? He gets on MTV and suddenly he thinks he’s a star.

Brad takes a time out from watching the clip of his ridiculous Disaster True Topsoul at AZ State to perform some charity work wheeling the aging French around the garage. If this is the future, we better all step up our health insurance.

As we headed for the car after a few hours of the good times, a stray cat named Damien followed us looking for some scraps, which in this case happened to be a few copies of ONE. Did this little kitty purr? You bet your sweet ass he did. Now leave a comment and convince the Santee guys to post the FILTH trailer right here.

podt the trailer or get raped by some hardcore croatian baby cock.