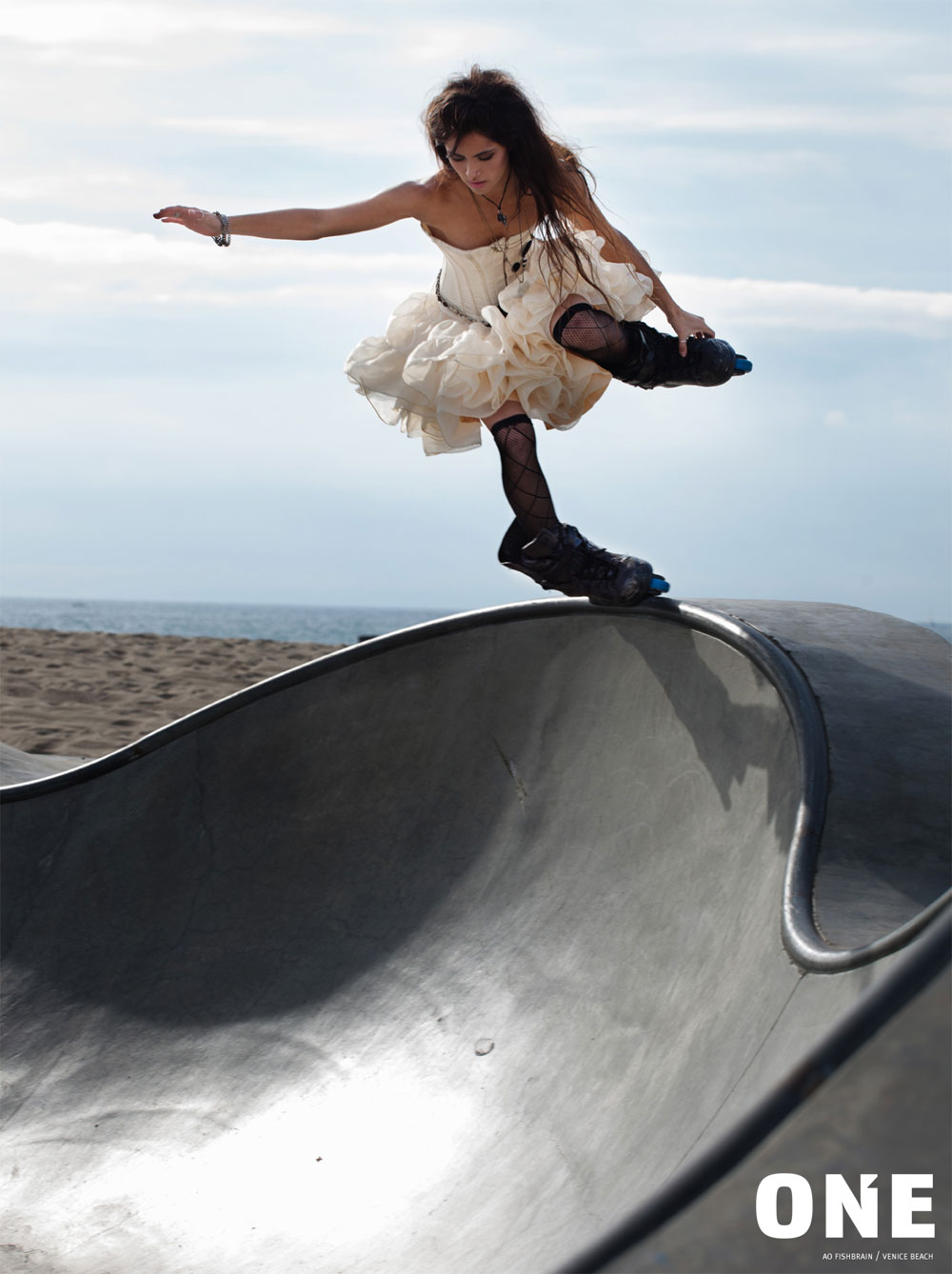 Rollerblading has a pretty forward thinking history when it comes to gender within our community. Women have long held roles as leading pioneers in blading, from Angie Walton launching Daily Bread magazine to Fabiola DaSilva smashing gender barriers to compete directly against men on the competition circuit. And even during the stark lack of media exposure for blading, occasionally groups of women would be gathered for speciality events that might even get some airtime on major networks. So no matter whether you’ve ever thought about it or not, blading has been ahead of contemporary culture in this regard. That’s cool! And keeping that legacy alive is Coco Sanchez, a talented female roller that models, does demoes and shows for All Wheels Sports, and shreds hard at every event she enters. Back in 2015 Jeff Linett produced these images and they served as the foundation for a long-overdue interview in ONE Digi v.5. — and we’re proud to re-present the full interview here for anyone that may have missed it before. Enjoy!

Where did you grow up, and when did you relocate yourself to the west coast?
I’ve been brought up everywhere: west coast, east coast, down south. I made my way back to Cali in ’09. I’ve currently been living — still also growing up — in Long Beach, Ca.

At what age did you first discover inline skating?
I’ve been skating since I can remember. Roller rinks in elementary school led to speed skating, then to aggressive skating. I guess going really fast in a circle wasn’t enough for me. By the time I hit the skatepark, I was about 11. 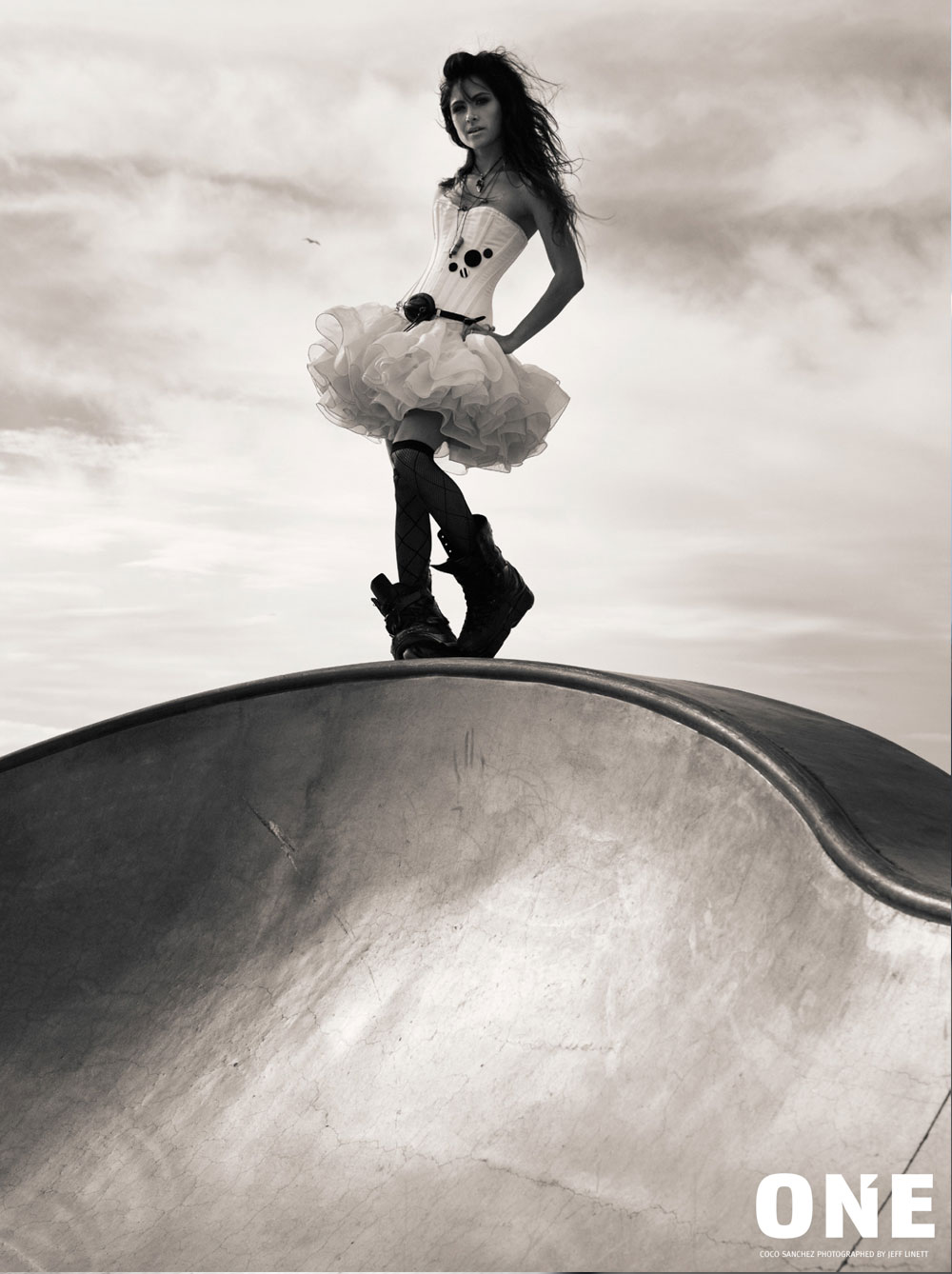 How did that sit with your parents? Were they supportive of your choice to skate, or did that cause friction for you?
My mom bought me my first pair of aggressive skates. I can recall an argument between my parents shortly after I received the big birthday present. It’s a male-dominated sport and I was already passionately involved with basketball too, which my dad coached. My dad got over it and became my number one fan when I won the first competition I entered. I quit basketball and as a family we traveled the south from contest to contest staying relevant in the blading industry.

What about any gender bias within blading… or any action sport really; is that something you’ve encountered? How did you deal with it?
At this time in my life, I’m so motivated to progress my own set of skills and help the sport prosper that I don’t let myself get distracted by anything gender bias related. It all comes down to what you really want. If you want it bad enough, you won’t let such negative encounters disrupt you and the vision. 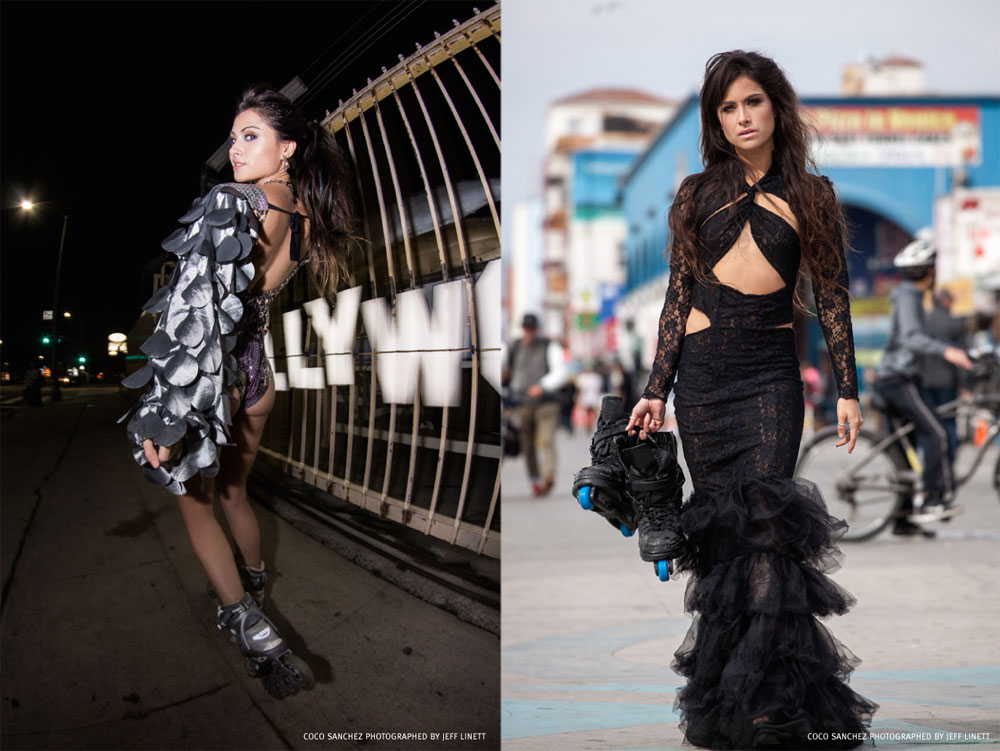 But it’s not necessarily a bad thing to be skating with a bunch of eligible bachelors, is it?
It’s not a bad thing at all. In the relationship department, I’ve run into many lessons good and bad with dating other athletes. I have skating to thank for introducing me to Austen Seaholm (pro skateboarder) who i’ve learned so so much from, both skating wise and in everyday situations. You learn from past relationships until you find one that keeps you hungry to succeed in this life. 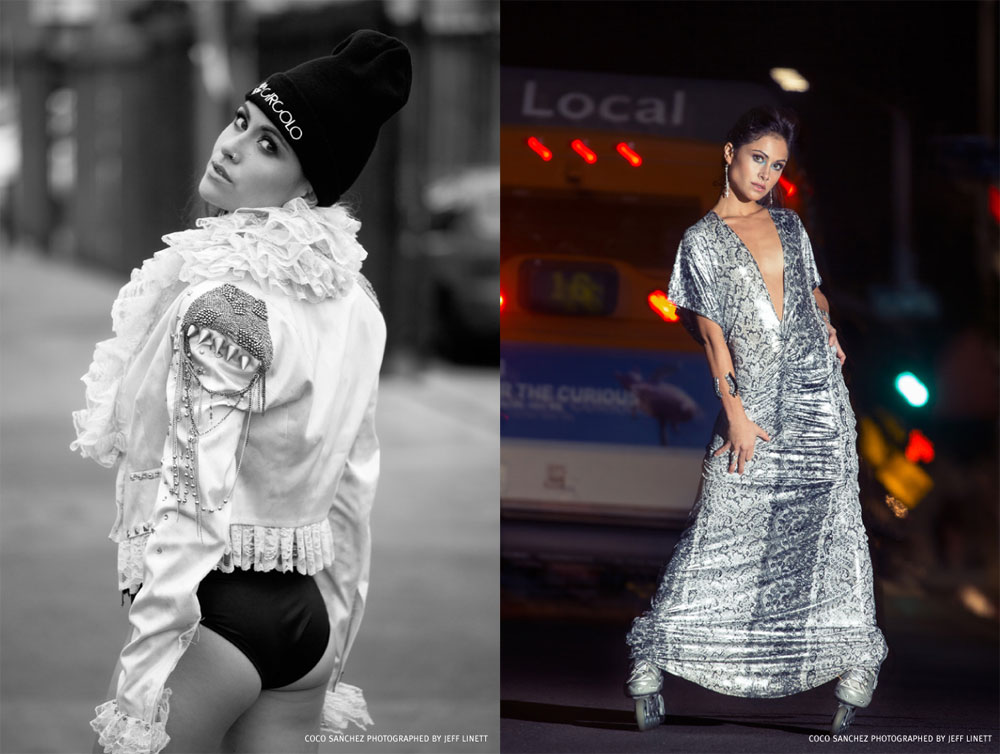 In other sports there’s “amateur” or “professional,” what’s your status within inline skating? And how did you earn it?
Starting January 1st, 2015 I signed with Team Rollerblade as a paid and competitive rider. This is the first time in my career where I’m under contract that requires certain expectations from both sides. I’m also on salary which is awesome!! I strive to turn those heads who are unfamiliar with this sport. That’s all I concentrate on and it seems to be working. Rollerblade’s decision in adding me to their pro team gives my vision a massive boost of determination.

How much traveling does a professional inline skater do? Where all have you been to blade?
Traveling is one of the greatest parts to being a professional athlete. I’ve had the opportunity to travel all over the U.S., different parts of China, and Europe. Beijing, China is the most interesting place I’ve been to. It’s always a pleasure visiting that country. I’d say I y out every two or three months to either a competition or a show.

Have you spent much time competing in organized events? What have those experiences been like for you?
I compete in as many competitions as I can get to. The Asian X-Games and the KIA World Extreme Games are a couple of the top events that I’ve had the opportunity to compete in. Located in Shanghai, China, these events come with nerves and excitement, as skating so far from home can feel unfamiliar. Nerves help me while under pressure, so I suppose it’s not so bad after all. This week, I’m off to Amsterdam for the largest event in the blading community, Winterclash. It will be a fun one! Wish me luck. 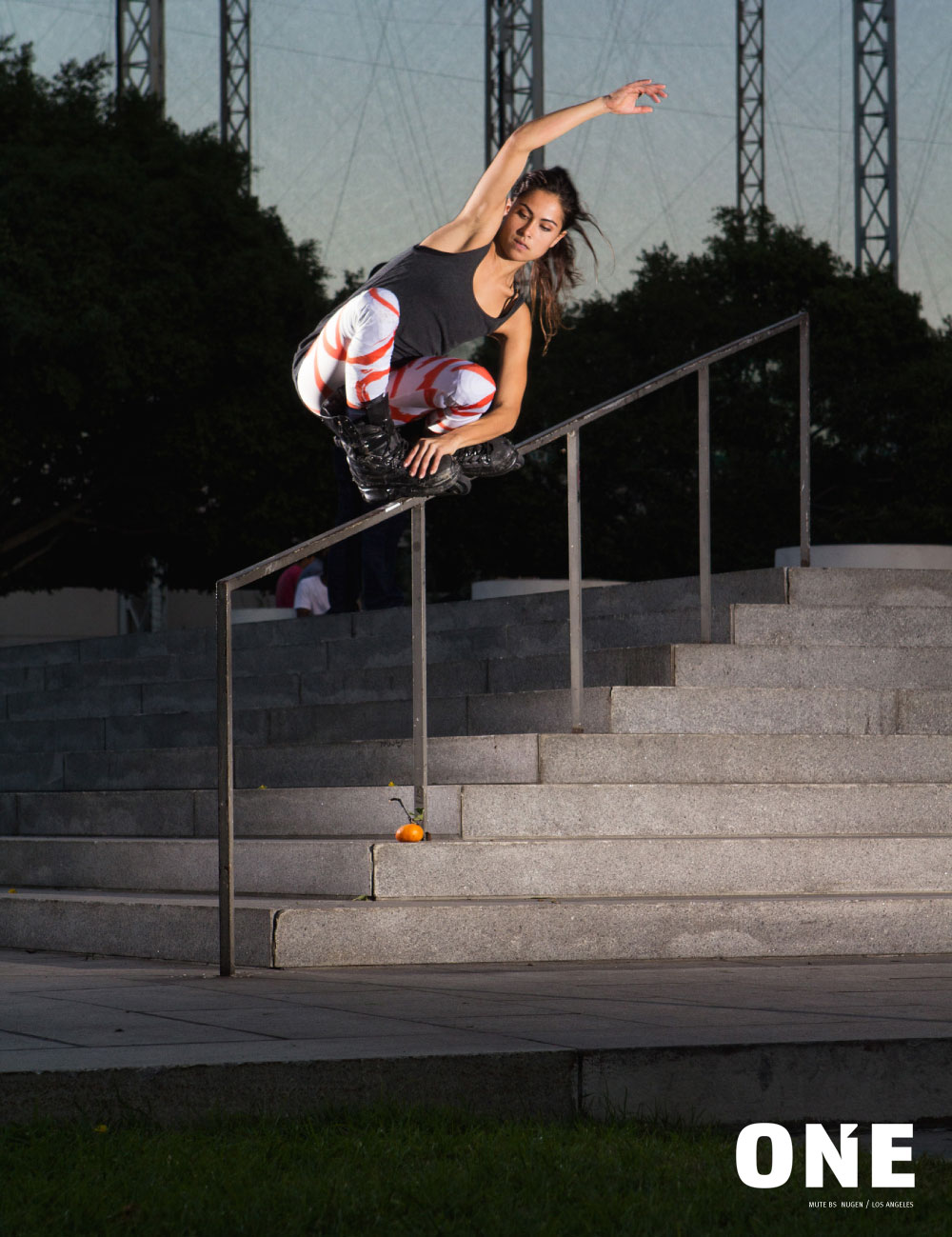 Tell us about the group you tour with, All Wheel Sports. Who’s in charge of that and how did you get teamed up together?
I’ve been a part of the All Wheels family for seven years now. I was recommended by a former cast member. Every summer a select few athletes perform in shows at theme parks around the country. There’s about five locations right now. I perform in Sandusky, Ohio at Cedar Point. Jill Transki, the director and the person in charge (aka MoM) takes a variety of sports and their athletes and choreographs a nail-biting, fun and exciting show for audiences of all ages. The show can consist of blading, bmx, scootering, gymnastics, dance, parkour, tramp wall, etc. They specifically look for interesting or unusual talents that gives the performance an all around unique feel. I’ll be off for another season this May! YAY!

Have you learned anything unexpected from being part of a multi-sport group?
I learned that if you truly trust the group of athletes you’re working with it makes for a much more exciting show. The previous summers you’d have the bmxers flipping over someone while you’re doing a trick under them. If you don’t trust one-another…”OFF WITH YOUR HEAD!” No, but seriously, it could get ugly. Trust is key. The greatest part about All Wheels Sports is that Jill takes these athletes who are involved in different sports and brings them together creating lifelong friendships. It’s the absolute greatest job to have. 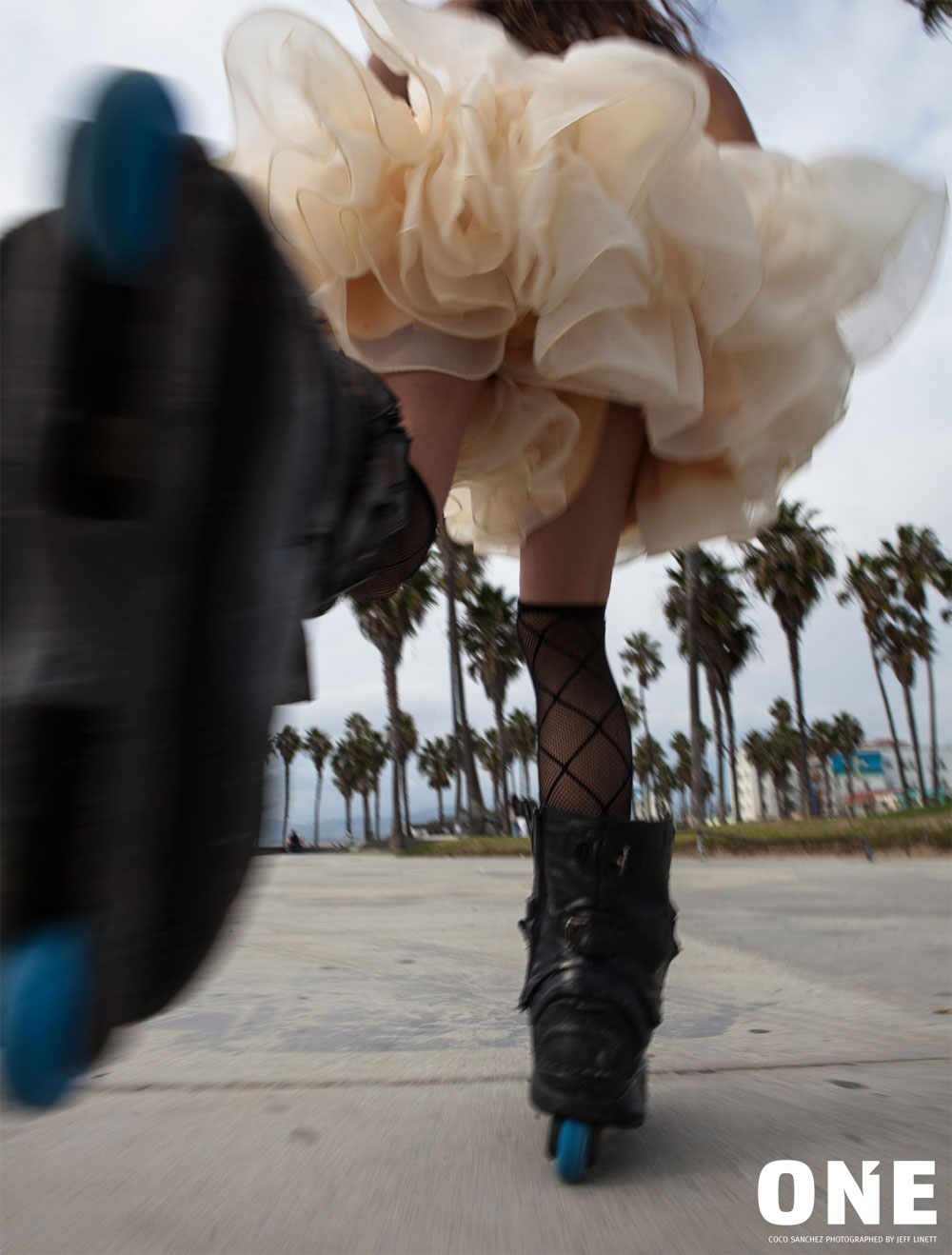 Was it fun to go through hair/wardrobe then strap on your boots and hit the skatepark?
This shoot wasn’t easy. It was the first modeling experience I’ve done that involved my skates. The wardrobe was hard to control while rolling around. The stunning long dresses were dragging behind me, sometimes even being rolled on. The corset dress was my favorite out but, that being said, we had to get the shot quick due to not being able to breathe properly. It was difficult for me to keep my focus deep within the lens while distracted with these problems. But at the end of the day, it makes it that much more rewarding. Looking back at the work that Jeff, Gordan, and myself created is a gratifying feeling.

What’s the most surprising thing that’s happened to you through being an inline skater?
Running into familiar faces while traveling the world is pretty surprising. You never know who you’re going to bump into. And every single time is a happy moment.

Any words of wisdom for aspiring athletes out there reading this?
Blading isn’t the most popular sport. I think it’s safe to say we know what happens when someone or something isn’t so “popular.” I’d like to say that no matter what you choose to do in your lifetime, make your decision count. For yourself, and nobody else. How could anyone possibly understand your true roots, your feelings, your passions? They can’t and they won’t, although they’ll put in their two cents anyway. Just be yourself 100% of the way. Start now and don’t look back. And if you start to look back, shred through your head. Dream it, see it, believe it. Stay shredding.

Well thanks for your time and best of luck with everything. We look forward to seeing what you get up to next!
No, Thank you! I’m looking forward to it!

All Photos by Jeff Linett
Interview by JE