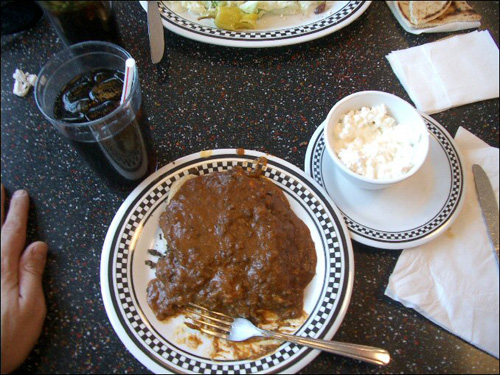 For most of us, the last weekend in February has taken a permanent residence on our calendars as a miniature-escape in disguise. We take off from school, forget about all of the cubicle, 9 to 5, American Dream bullshit and use vacation time from work to go to Detroit—in February. We fly, drive or bus our way across the country, across the world and arrive in a Midwestern town covered in snow, blanketed by economic strain but overflowing with the energy of a culture of maniacs. Risk-takers, daredevils, posers, shredders—we go by the name rollerbladers. In issue #19, I think I called it “blade culture at its core.” But it’s much more than that. The Bittercold Showdown is the status quo of American park contests, even though it changes each year.

But, like any high school, sorority party or Internet messageboard, there are first-timers abound. And if this year is your first pilgrimage to motor city, there are some things you should know before you end up face down in a Coney Island gyro plate at 4 in the morning or sleeping on the floor at the Econo Lodge. I present to you a list of DOs and DON’Ts that won’t “make or break your BCSD weekend,” you shouldn’t “live by them” but hopefully they at least help you avoid getting arrested in the parking lot… Once you leave the parking lot, it’s on you. Until then, scroll down.

DO: Fuck shit up. In every sense of the phrase, do it. Skate, socialize, party, eat greasy food, make new friends, make funny signs, cheer for your favorite pros, tweet about it, go to the video premieres, jump all over the course when Bolino, Chase, Broskow, Fish, or any other big name laces a hammer and force Daniel Kinney to the megaphone—holding you back. (He only pretends to mind.)

DON’T: Taking the first DO into consideration, DON’T give it all to Friday. Bittercold weekend is a nymphomaniac for three days—you need to be able to hang until Sunday. Think about it like this. WWAJD? What Would AJ Do? He’d drive across the fucking country after another tour and another video, open up another bottle and say, “Let’s start the show.” But, rest assured knowing that this will be a daily regimen for the entire weekend. (Last year’s “Charging” premiere notwithstanding.) Sleeping through the tradeshow is bound to happen to you at some point, just try to avoid it if it’s your first time.

DO: White Castles. They’re everywhere in Detroit. It’s probably about as healthy as eating a box of cigarettes dipped in motor oil, but if you live in a part of the country where your experience with White Castle cheeseburgers extends only to the frozen, mutilated, microwavable excuse of a slider found at the convenience store—eating one fresh from the griddle is like discovering that Lindsay Lohan really did have a twin that has been kept in isolation since the release of “The Parent Trap,” in the event that the original Lindsay Lohan became addicted to drugs and headlines. [Sub-DON’T: Order the fish sandwich. Just ask Tony Rivituso.]

DON’T: Put off travel plans until the last minute. The only thing worse than missing the contest is being stuck in Detroit until Monday.

DO: Respect the locals. Being drunk is cool. Being drunk with your friends from all over the country at one of the biggest blade contests is even cooler. Being a douche in public isn’t.

DON’T: Have any regrets. If you’re competing, this is your shot; this is your chance to get “1000 views” all at once. Go for the trick, do your thing; this isn’t an online edit, its BCSD. Make a name for yourself or keep up your reputation. If you’re a spectator, a partier, a pro, an AM, a filmer, a photographer, a kid from the desert with a foul mouth, a blog and an Internet connection, the same rules apply. It’s Bittercold weekend, and it’s one of the reasons we love blading so much.

I gotta lay off the beer on Friday’s.

Do NOT skate too hard before the comp starts.

DO make it downtown into the actual detroit, see somehting besides the 2 roads by the park in royal oak(a suburb) and go to “the rollerblading project” friday night.

Lol to LJ, he’s pretty much spot on as well as the author of the article.

The Truespin On “Alley-Oop” History

Touring with the Ratz