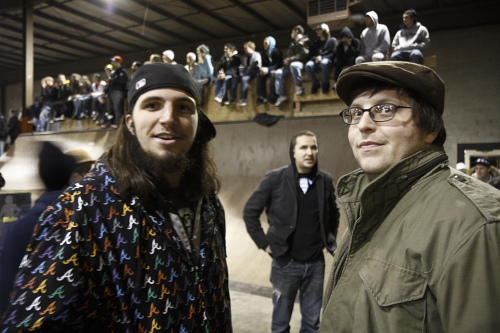 Well, another 364 days have passed. Tomorrow we practice the annual ritual of wedging ourselves inside a giant aluminum missile aimed towards Detroit. Awaiting us at the end of our voyage are cold winds and possible snow flurries. But today, while still in San Diego, the weather is a perfect 80º and the heated buzz of our normal routine keeps us tethered to reality.

That ends with a blast of cold air to the face, the stress of getting the rental car, and then navigating ourselves onto the highways for the oh-so-excellent final 45 minute drive into Royal Oak. But while that marks the voyage’s end it’s actually just the beginning of the very thing for which we made the trip.

The pic above is the oldest photo of myself at BCSD I could find online. There’s an older one somewhere — me slouched down at the industry meetings that used to take place at Vertigo Skatepark — but I couldn’t find it. Oh well. So instead here’s me with Kevin Dowling and a lurking Daniel Kinney at The Flow in Columbus, OH. What was that, 2008? Wes and I had just gotten back from our first foray to Winterclash. Man, we were beat. In fact, this was the only BCSD where we really half-assed our booth. We didn’t take anything but some magazines!

Though I’ve lost count of how many of these I’ve actually attended, I can remember being at the second BCSD in Elkhart, IN, and of course almost all of the events at Vertigo, and I think every single one since then. Stopping to think about it (or more correctly, write about it), I really can’t believe that not only has BCSD stuck around for so long, but that it’s the one event year after year that falls in to the “can’t miss” category. If I’m honest, the main reason is the tradeshow; there’s nothing else in our industry that comes close.

But now, with less than 24 hours to go before departure and a whole mess of real world shit to get handled before checking out of reality for the 72 hours of BCSD, a stream of flashing memories — faces, laughs, fights, friends — roars through my head and reminds me of why, once again, we’re going to Bitter Cold Showdown. See all you sunsuvbitches there.