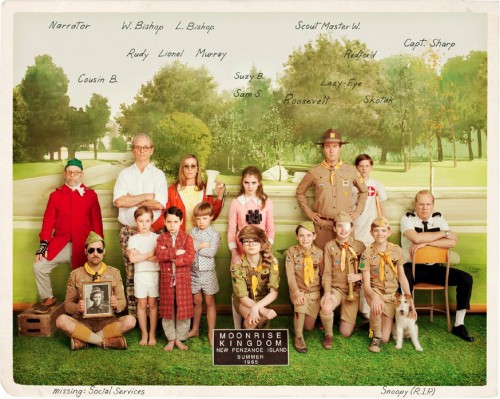 Moonrise Kingdom follows a pair of troubled 12 year olds on a romantic adventure in 1965 on a fictional New England island called New Penzance. Sam is an orphan that is informed by his most recent set of foster parents that he isn’t welcome back to their home after his most recent escapades. Suzy is the daughter of well-to-do lawyers struggling with their own marital issues. A search party is formed to find the runaway lovers that consists of Island Police Captain Sharp and Sam’s Khaki Scout troop.

Everything in this film is on point. The painstakingly elaborate costumes, intricate & beautiful sets, hilariously touching script and arguably Wes Anderson’s finest ensemble cast to date. Everything. Alexandre Desplat composed a wonderful score that weaves in and out of songs performed by Hank Williams and Choir of Downside School, Pursey, respectfully.

Anderson’s films have an extraordinary charm that is consistent with every release. The writing so accurately captures the experience of growing up and the sometimes raw nature of interacting with those close to you. It is razor sharp and has an infinite amount of heart.

You can see Moonrise Kingdom at the Landmark Mayan in Denver starting this Friday the 8th or in a city near you.