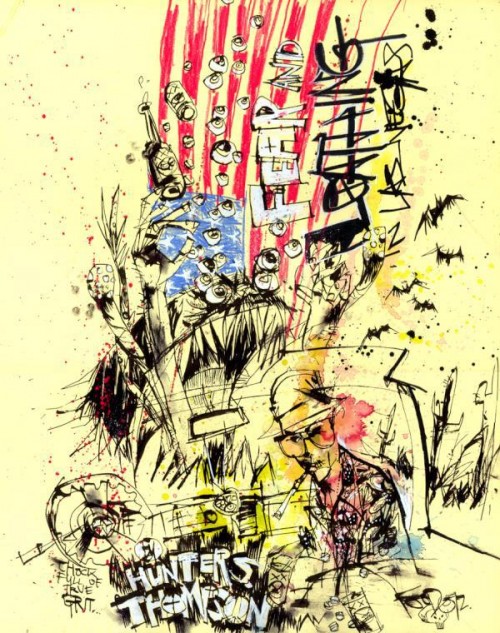 “Writing is like going into a long tunnel. You enter having no idea what you’ll find on the other end, or if you’ll make it there at all…”

To which I replied:

“You just close your eyes, mash the pedal, and trust those ponies under the hood to do what they do.”

I thought that sounded pretty cool and managed to fit in 140 characters. Lucky. But I meant it, because it’s true. If you write for real in any capacity you know that sometimes you just have to literally write in order to get the material you’re after out into the world. Yes, deleting things you have written is part of writing. It’s part of flushing out the sludge to get to the real shit. It’s editing. Editing yourself is hard — probably the hardest part. Finding someone to edit who helps you sound or be your best is an art in itself. But we’re digressing, a lot.

2006 was a tough year. For me at least, July especially. DB was gone. Done. Finito. That was a bad time. That led to exploring the world of real work in San Diego, which fortunately led to a job — a career really — but that’s a whole other story of distraction. But, already under a ton of pressure, we’d also begun working on Barley Dead, and then Wes and I started ONE! Jesus, so much was going on. Right in the middle* of all that my hero, a distant mentor — a true inspiration — separated his brains from his body with a Colt .45. Boom. Done. Finito. HST was gone. I started writing this the night the news broke. It helped make sense of things, I guess. It helped get me a job, I think. My friend Ben’s words reminded me about it. Words can be awesome. Dug these up off a harddrive to share.

Hearing news of Hunter’s death was unwelcome. It was a topic he forever prophesized for our pleasure as readers, but nonetheless I had resigned myself to the notion that the finest machinery and science of modern medicine would have allowed this man to live forever. A perfect fusion of flesh and steel – designed to infuriate. Let’s face it; the world could use a Hunter S. Thomson robot. In a more perfect world than we are fit to know, he may have ruled supreme over our wild society of sin with Arnold Schwarzenegger as his sidekick henchman. They could have run this shit right. Hunter knew what the hand of American law lacked: two thumbs; Hunter was all about them.

And it really is comforting right now to think of the moment of Hunter’s death as an event – two great claps of thunder through the grey Aspen winter – some tangible moment; a happening; a moment that mattered.

How do you think he did it? The papers have not specified how many shots were fired, and I can imagine that if one shot had been fired that might have been just the kernel of knowledge the newspaper pundits may have thought to throw into a few headlines to distinguish themselves from each other in this time of information overload. SINGLE SHOT ENDS RUN OF SAVAGE, DEGENEREATE BEAST. I can see it now.

But they did say it was a .45. That’s gonna leave a big fucking hole in someone’s head. And though I give him great respect, I think inside that Hunter would want us to know what a mess he had made of himself; his last carnal display. That was his whole gig anyway. If he didn’t get his extravagant antics published, then they may as well have never even happened in the first place. I’m sure that somewhere there is a record, or a note, or a coroners report that will eventually paint a grisly picture of a wild man at the end of his chain who brought his world (and in a sense ours) to an end in a thunderous moment with two fistfuls of Colt Fully Automatic action and a head full of something high and mighty; may we all be so fortunate as to meet such glorious ends. A warrior’s fate for a warrior of words and ideas; long endings saved for lesser men.

Death be damned, even in this end surely more great bodies of letters and writings and thoughts will be released, and though his remains may well be shot from a canon built by friends upon the same Woody Creek Compound grounds where the deed was done, Hunter will defy all odds and creep into our lives again with potent words of insight from beyond the grave just as he did from the beaches of Puerto Rico, the Vegas strip and from within the depths of the American political system. Hell, if he took a whoopin’ from the Angels, then chances are he has known darker times than the skies that lit his final moments. The good Doctor is now out.

Art borrowed from the talented FOOD ONE aka Jim Mahfood.

*Full disclosure: Memory served me wrong — HST did the deed 02/05. So it didn’t happen in the middle of all that 2006 stress. But that is when I pulled this out of my catalog and circulated it with writing samples while looking for “gainful employment.”