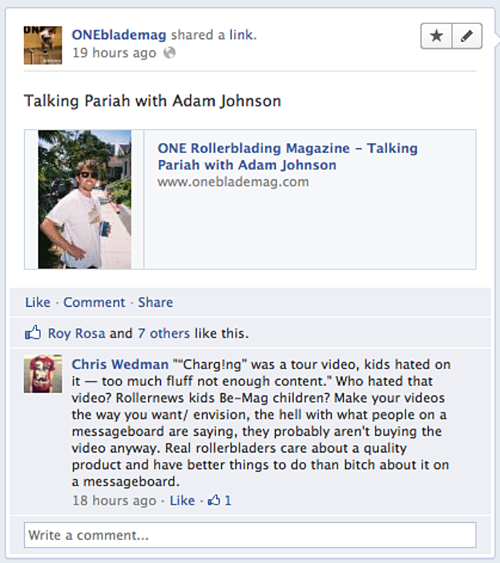 Yesterday we posted a quick Q&A with Adam Johnson, talking about his new flick “Pariah” and just catching up. One of his statements struck a chord with Canadian photographer Chris Wedman, who left an interesting comment on our Facebook page (above). Chris was willing to give us some background on his comment and what he thinks about blade culture on the internet, so we used it as a chance to touch on an oft-discussed but messy gray area of contemporary life. Here goes:

Do you mean to tell me that people say disparaging things on the internet? All kidding aside, please elaborate on your statement.
In the Q&A, AJ lists the amount of blade videos he’s made and it’s ridiculous. I could be wrong, but who aside from Dave Paine has contributed that many videos to blading. That’s a ton of time and effort. Without a doubt when AJ makes a video it’s the most anticipated video of the year. He’s working with the best talent our sport has to offer, and showcases it in a quality manner. There is no argument, it’s a quality product that he is producing. Any negativity directed towards “Charging” or any of his releases aren’t coming from the bladers he works with, or his peers who are making videos, but children who troll messageboards hoping for some reaction. Their opinion is invalid. Unless you are gaining constructive criticism from your peers, all other opinions are noise. What people say on messageboards are things people won’t say in real life because they have the safety of anonymity. How many times in person have people come up to AJ and told him how much better “Charging” could have been if _____(insert opinion here)? Probably never. If he were making a product that wasn’t worth it, people would put their money somewhere else. If people don’t like his work they can buy another video — they have options. He’s dedicated a significant amount of his life to blading, so it’s the lack of respect people have for someone who has contributed so much that blows my mind.

The man proved his worth and staying power in rollerblading a long time ago. If you were to remove his contributions from blading you would be removing a big gap from blading history. He has nothing to prove to anonymous messageboard haters. The only person he has anything to prove to now is himself. As a creative individual, you owe it to yourself to push yourself to create the best work you can and be proud of what you’ve done. The rest of us will be here waiting to enjoy it and should respect your vision as an artist.

Do you think there are any companies in blading that take a lot of direction from what people post on messageboards and forums?
There are individuals out there who make an effort to respond to criticism for their companies and I think that’s great, especially when the points are valid. Rollerblading is so small that we should be able to have this interaction with the people who make the products if we want to improve them. If it wasn’t for feedback we wouldn’t have better products and innovations in rollerblading. That should come as an extension of customer service from these companies, having that line of communication open with their customers.

But in AJ’s case it’s different, he’s creating a video. It’s a creative process, it’s not like troubleshooting a skate. You don’t see people calling out photographers and designers in rollerblading, telling the world how Wes Driver could create a better photo, or Robert Lievanos could do a better logo. So why should a video be any different? You can have an opinion, but most of what comes out of messageboards is anonymous hate just looking for a reaction. It doesn’t contribute or improve anything; why acknowledge it? The professional rollerbladers I know don’t pay attention to messageboards and look at them as more of a joke than anything. It’s due to the fact that people can and will say anything ridiculous, so how can you take the hate seriously?

How do you think that impacts product development and marketing or, on a bigger scale, the overall direction of the community?
As stated in my previous answer, in hardgoods it’s great. We need feedback to push products forward and improve them. If companies are willing to listen to us we should be giving them as much constructive criticism as possible.

As it pertains to media I could answer it with a question “Has it improved your magazine/website?” It seems ONE readers are a little older and more mature than your common messageboard user and are interested in quality content. You see a lot of positive/valuable input in the comments section on the ONE site and I believe it’s mainly due to the maturity of the readership. If you have a community that constantly feeds off of negativity and cultivates it, that is what will grow. If you have a community that is inspiring and helping to improve one another, only good can come of it. This has been proven with how much the magazine and website has grown into a well respected cornerstone of blading media.

Can you cite any specific examples of where feedback on the ol’ internet differed drastically from your/your crew’s experiences with a product or whatever?
Every few months our local crew will get together and watch a new batch of blade DVDs. More often than not, our conversation turns to “Did you see what people were saying about that edit/video/etc?” It’s more a conversation of the ridiculous/hilarous things posted and how can people hate on something so undeniably awesome. It’s easy to hate and arguably a lot of fun. If you look at viral videos on YouTube, reading the comments is half the fun because of how ruthless people can be. Being anonymous, people don’t fear what opinions they leave on the internet, but what they don’t realize is the effect it can have on the person it’s directed at.

Anything you want to close with? Maybe a dig at the first fucker who leaves a douchey comment?
“Think before you post” would be the most poignant. Instead of posting negatively on a messageboard or blading news site, maybe you should be out doing what brought you here in the first place… blading.

Thanks for sharing your thoughts, Chris. Can’t wait to read the comments. Ha ha.

I know this guy! Best blade photographer in Canada

“Real talk!” To hell with trollers. They cant hate unless they viewed the edit or popped that Dvd in. The creator of these edits/vids essentially wins hate or not. But that’s just my exasperated opinion. Nice piece. Enjoyed it.