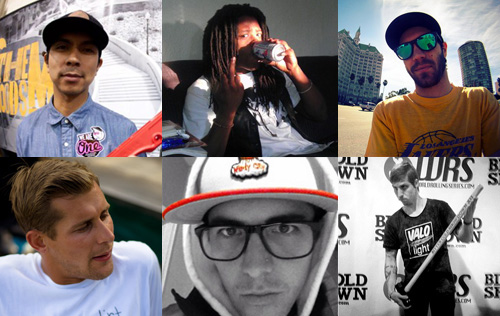 …or “Learning about people through social media” a.k.a. “Getting blocked from following people we like”

It’s not always what you say with social media, it’s also about who you follow — mainstream media, famous pro athletes, musicians and more. After joining Instagram and looking through people’s FOLLOWING lists to set up who we wanted to follow, we noticed a trend amongst some of the top bladers. So we investigated further to see what else besides blading these dudes were paying attention to. This is what we found:

Conclusion: Chris keeps up with his Nitro Circus homies (on Twitter — which is private — so you can’t see), stays entertained by a couple funny people, and looks to social media for good vibes and inspiration.

Conclusion: Alex mostly follows the usual blading suspects, with this one exception.

Conclusion: The President supports the supporters and stays up on tech/fashion trends. And likes Zooey, too.

Conclusion: No nonsense Bailey with the no nonsense follow list. Check out Bo Bushnell for some cool photos.

Conclusion: Brian likes basketball, rappers, conspiracies, athletes and funny stuff. And Tony Robbins comes through with the inspiration. Also the blader most likely to know about your astrological sign.

Conclusion: Tre knows what’s going on with the Carolina Panthers, because he follows a bunch of them. He’s also up on the indie hip hop scene, and his beloved PBRs.

Final analysis: Why do bladers like Zooey Deschanel so much?

That’s the kind of no nonsense I like. Follow 20 people. Don’t waste your time reading what dumb people say. I should be following Jeremy Piven though, real talk.

I have to check out Zooey Deschanel then. And Goldchyld too.
I follow a few of my friends that made it to twitter, ONE mag, straightjacket, Haffey and brian kranz. Too bad I cant follow Chris’ personal acc. Dude has been an inspiration to me since leading the blind. I’d like to know what he’s up to more often.

…and of course Deecizzy!! Ma man.