Next month, ten years since the last time bladers made the annual pilgrimage to the midwest, Bitter Cold Showdown will take place at Modern Skatepark. For anyone keeping score, the loss of North America’s largest blade event was no small matter. It was a tentpole event for the whole calendar year, and at the time it was the best opportunity around for interfacing directly with fans and customers, thanks to the revolutionary trade show component. But now it’s back, for a one-day advanced competitor event, with a declaration that this is a one-time affair, not the jumpstart of this beloved event. So we asked event creator Daniel Kinney to fill in the blanks and help us know what to expect when we roll into Detroit in February.

Hi Daniel, we’re excited for a weekend in Detroit taking part in BCSD! Thanks for answering our questions to help share info with the community.

It’s been 10 years since the last BCSD event, and blading has evolved during that time. What about this moment inspired you to work on another BCSD?
Several things came together to make this happen one last time. First and foremost, there’s very few park contests in the US. My biggest hope in doing this one more time is to try and spark something in like-minded rollerbladers and see new events start-up across the country. I’d be happy to share any and all advice to anyone thinking about making something happen. Reach out and I’ll share everything I know.

But what really lit the spark was thinking about all of the past champions of the event. Blading has evolved a lot over the past 10 years but past winners like Broskow, Sean Kelso, Montre, Fish, CJ & Cudot are still some of the best on blades. The idea of bringing them all together one more time was too exciting to pass up. 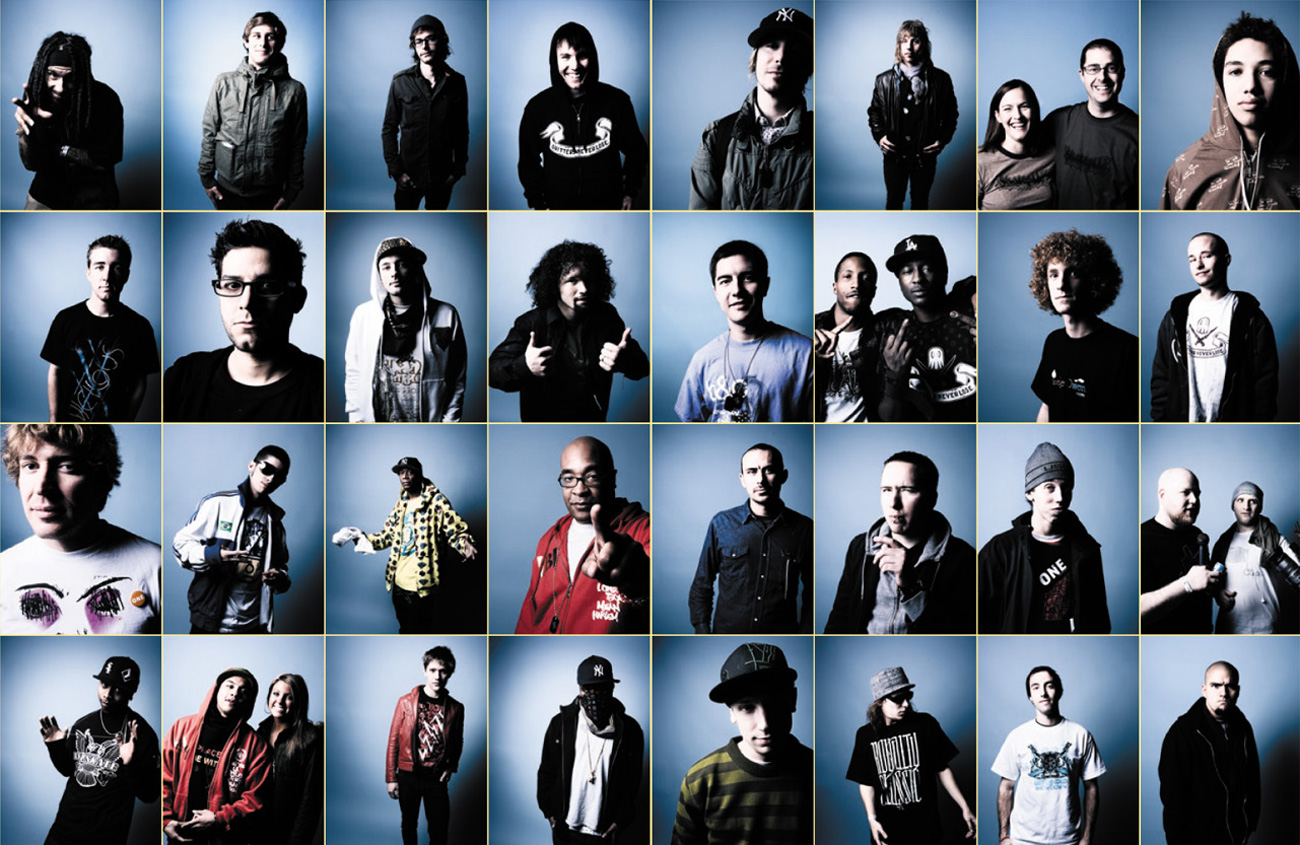 In years past the event stretched across Friday and Saturday, but the 2023 event is a one-day, advanced-only contest. How did you decide on restructuring the format?
It was a pretty simple decision. In the past, having the contest be open to all competitors helped cultivate younger talent. And doing an Amateur ranking helped those competitors qualify for other events. This time, we’re really focusing on the show. The finals. And crowning one final champion. Our riderlist will still be a big one. And most who are interested in competing will qualify. Now, it’s just much easier with Instagram to showcase your skills on blades without the event having to devote an entire night for competitors to qualify. 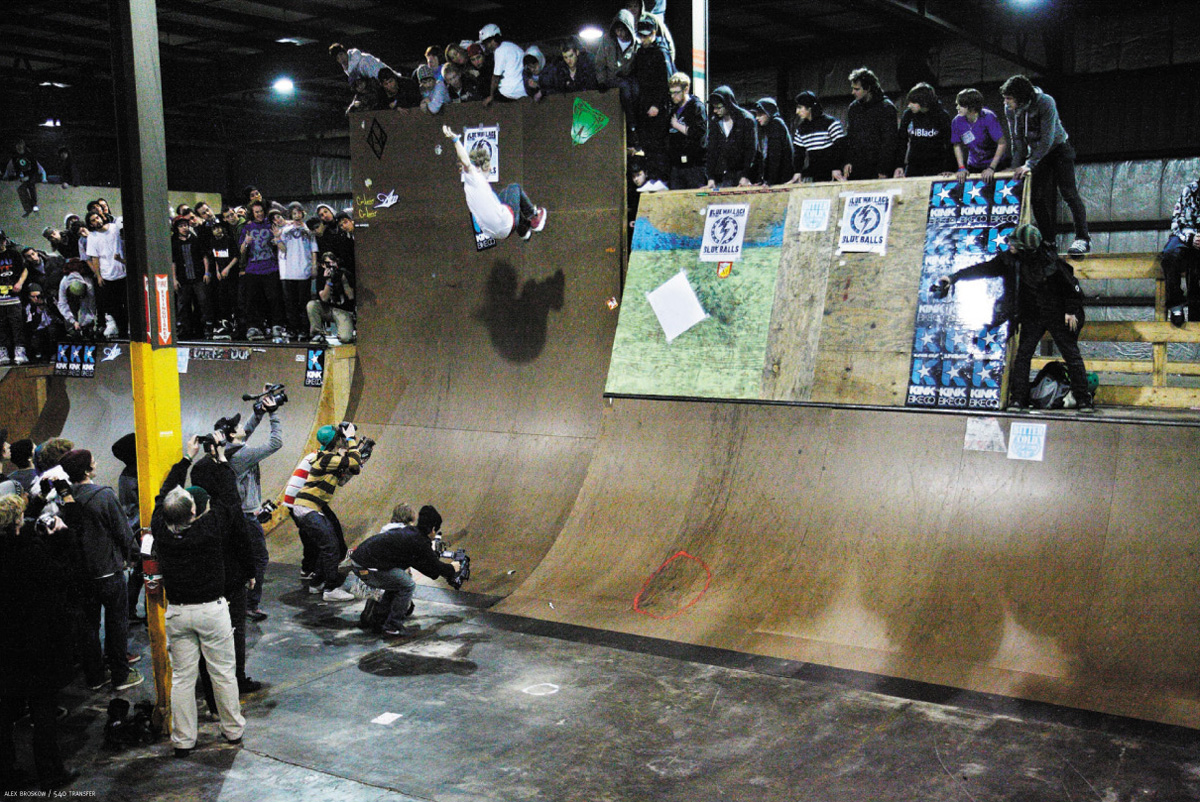 With the schedule shuffling, what should attendees expect when they show up to Modern Skatepark?
Rollerbladers should expect 12 hours completely devoted to rollerblading at one of the largest skate parks in the country. On Friday, Modern will be open for a regular session. On Saturday morning until midday we will have the trade show. If you’ve never attended BCSD, start saving some extra cash now. We will have nearly every core brand in rollerblading there with product ready to move. It’s a marketplace, not a trade show. Then, afternoon through the evening, will be the contest. The best rollerbladers in the world battling head-to-head for the Bitter Cold Showdown hammer trophy. 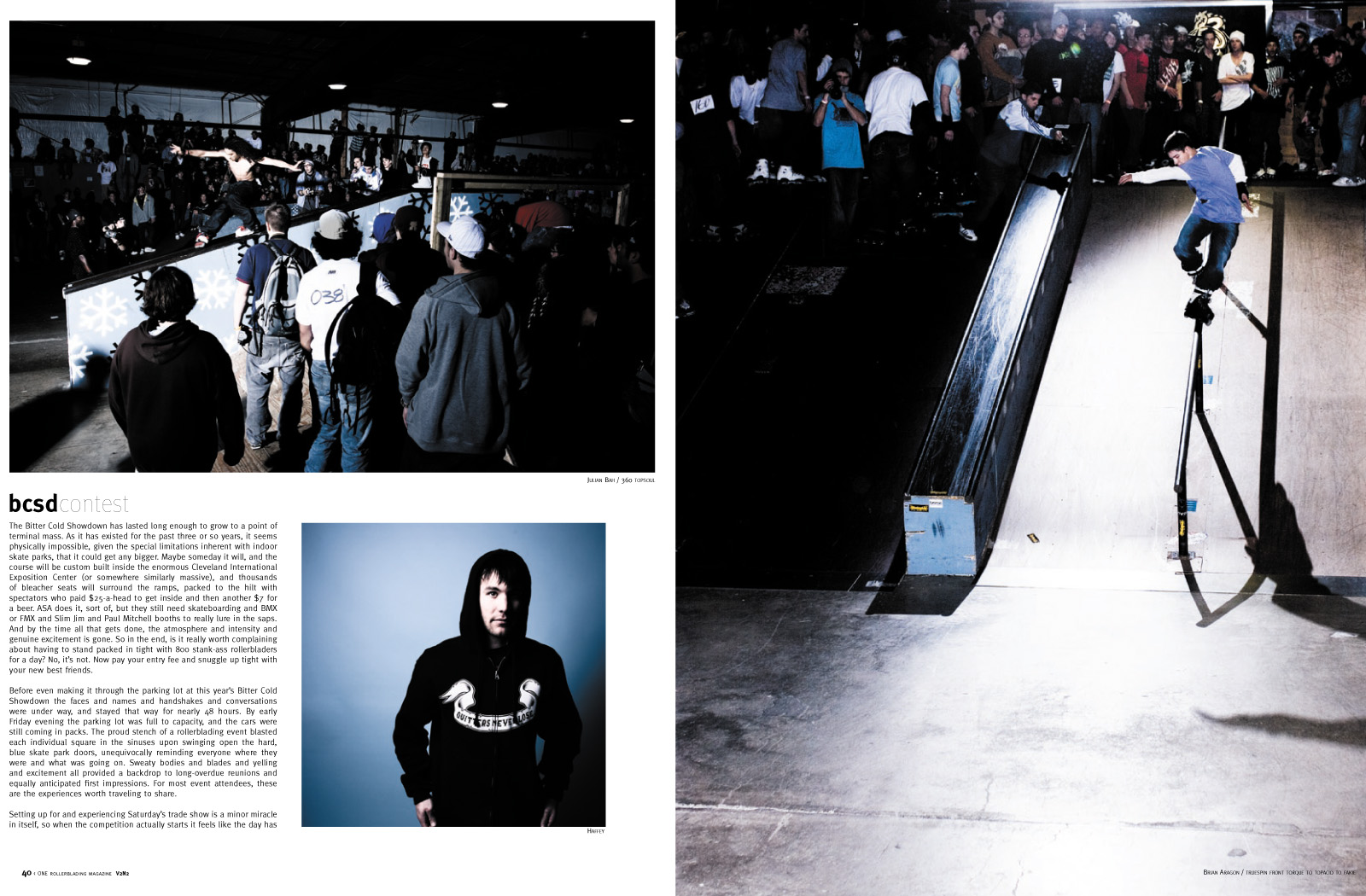 Do you have any theories on why another wintertime event didn’t pop up in the U.S. to fill the hole that BCSD left when it went dormant?
That’s a tough one. In preparing for this year, I took a look back at an edit from the 2014 Motor Town Classic that happened at Modern, the year after the final BCSD in 2013. It was awesome. Good size crowd and competitors still found innovative ways to destroy the skate park. I’m not sure why those guys took their foot off the gas & didn’t continue to push and establish that as a wintertime event.

Otherwise, it’s likely a combination of several factors. First and foremost the metric fuck-ton of work that goes into planning, organizing and executing this type of event. It’s gotten way easier for me over the years to do something like this because of everything that I’ve learned but I can’t imagine trying to develop all those skills again and having the patience to do it year, after year, after year to establish something. That’s why I’m very sincere in sharing anything and everything I know to anyone that wants to try and start a similar event.

Having not put together an event for awhile, were there any new challenges you encountered or was the process similar to how it’d worked for you in the past?
I was always diligent in collecting any and all media from each of the events. So building a website, making an edit and filling our social media for the 2023 event was a fairly simple task. All things I’ve done hundreds of times before. Also visited George Leichtweis, the owner of Modern Skate Park, over Thanksgiving and it was like we’d only taken a year off. Took some measurements & discussed some ramp ideas. If we couldn’t do this at Modern once again it never would have happened.

Looking back at the Bitter Cold Showdown legacy, what are your favorite stand out moments?
I think the 2008, 2009 & 2010 events were absolutely everything I could have ever hoped for with the event. BCSD became my own way to influence rollerblading both inside and outside of the industry. From the contest, to the prize money, to DVD’s, the television pilot, the trade show and the way it spread and reverberated through rollerblading was all I could have asked for. 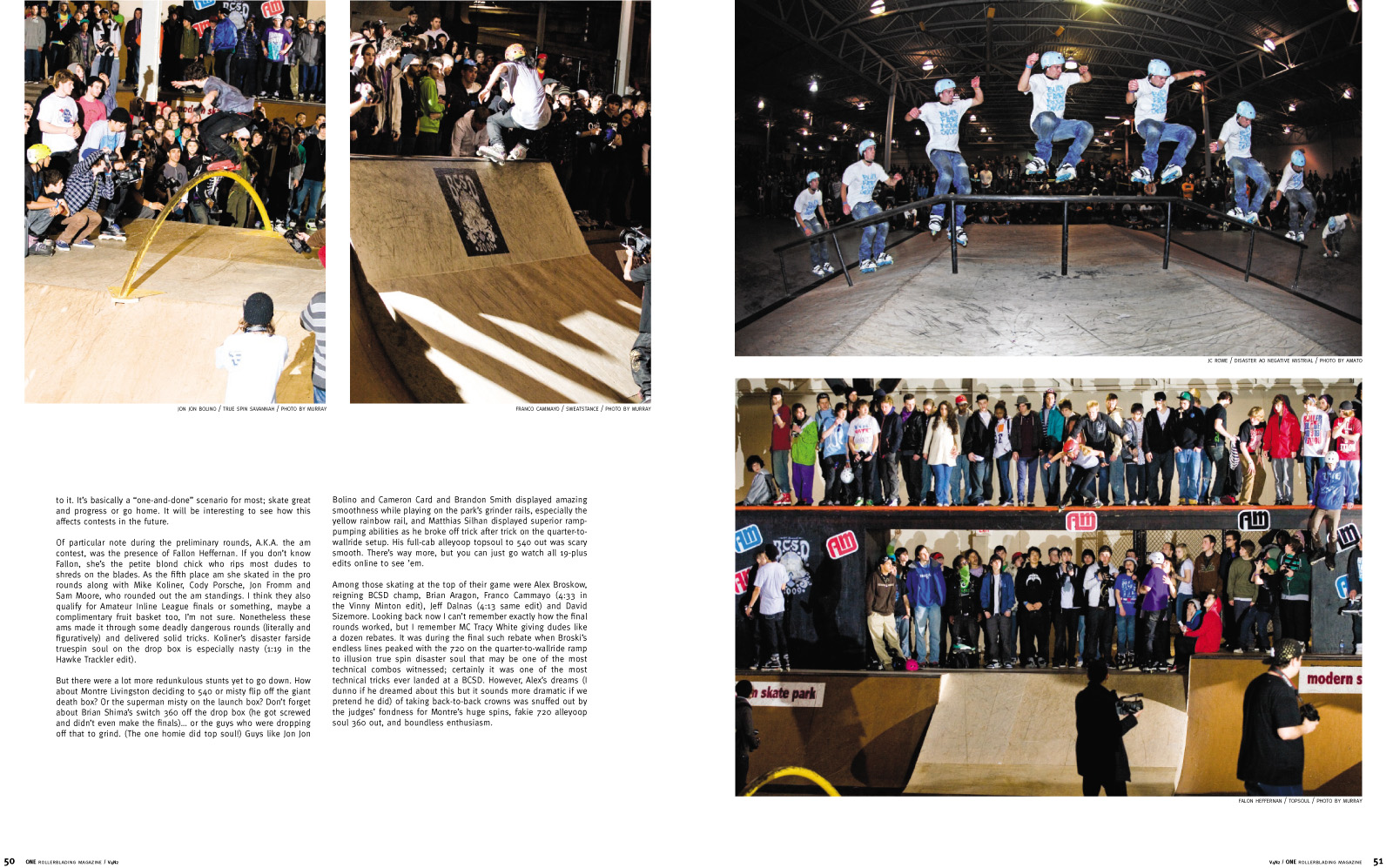 In the same spirit, are there any lessons you’ve learned that leave you wishing for any do-overs?
Funny enough, no. Not a single one. Well, I fucked up the finals in 2002 but learned quickly from that. And Erik Bailey won the 2006 event in a green Valo shirt & then we shot his interview on green screen, that was a pain in the ass.

What’s a piece of advice you’d give to anyone that’s putting on an event of any size?
Make a website. Buy a dot com. Organize all the information for the event and then organize it some more. Use social media a lot. Copy everything you like about other events. If you are asked a question more than once, add the info to the website. Don’t deliver on sponsorship until you are paid. Keep track of all your money. Collect all the photos and video you can. Always, always, always be on time, that’s your single promise to everyone that attends. Always keep your promises. Bet on yourself. And don’t do this unless you are the one that everyone can rely on. Then do it all over again the next year and the year after that. It will only grow with consistency.

Tell someone that may be on the fence about attending why they want to get to Detroit on February 25th for the last BCSD?
Ha. It’ll probably be fucking cold, I’m sure its a longer drive than usual or the flight may be expensive but we’re doing everything we can to make sure you regret staying at home. One last time means this is your last and final chance to experience a Bitter Cold Showdown. 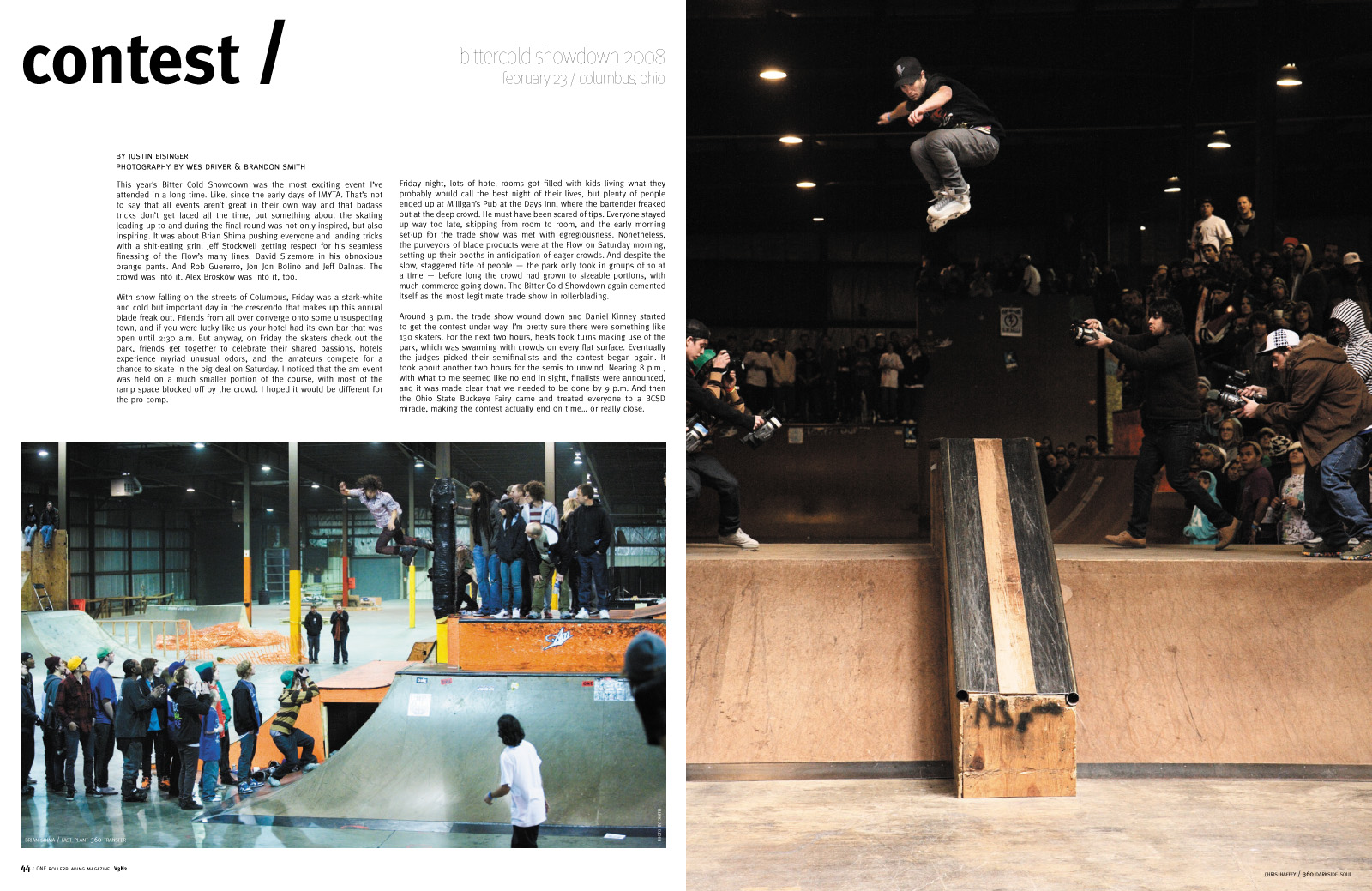 Well that’s great, thanks! We can’t wait to see how it unfolds.