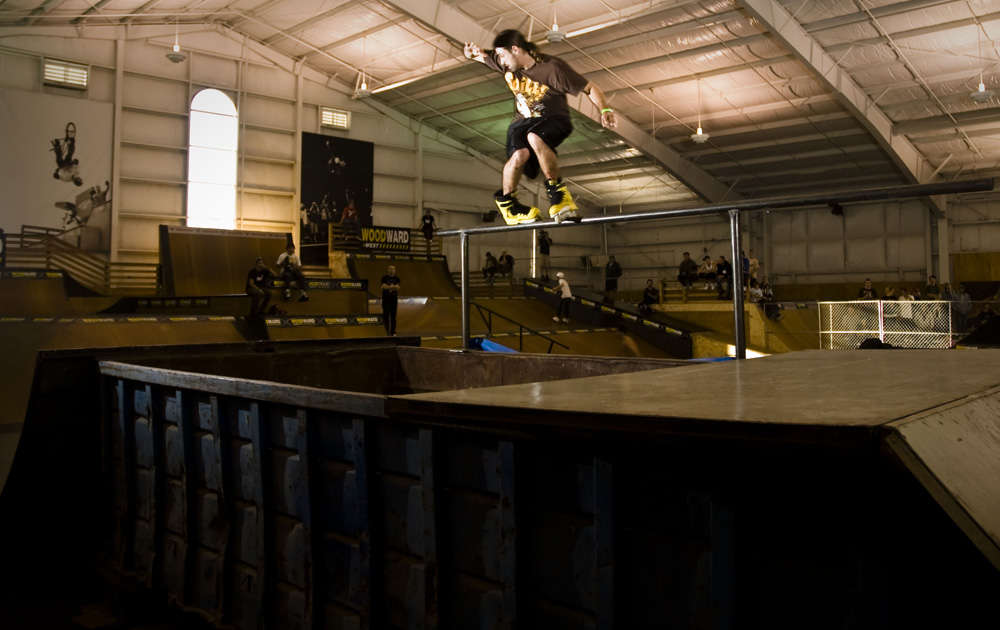 Written by ONE Staff - Published on Wednesday, October 28th, 2009

This years AIL World Championships was an event filled with tons of positive energy, friends skating with friends, and countless rollers coming together from all over the world to do what they dig the most, skate! There were rollers tearing up The Hanger at Woodward West from all over the States, East Asia and Europe. There were countless Pro riders like Demetrios George, Chris Haffey, Erik Bailey, Alex Broskow, Dustin Latimer and many more, along with industry Legends such as Arlo Eisenberg, Chris Edwards and Jon Julio…

Some of the most progressive Am skating went down this past weekend as skaters in the Elite division battled it out for a position in the Top 10. The Advancing rollers from were:

These boys went on to skate in Sunday’s Pro/Elite division of the competition for a $3,000 prize purse. After an afternoon of all-around amazing skating, the top three riders were: 1st Place Julien Cudot, $1500; 2nd place Yuto Goto, $1000; and 3rd place Stephane Alfono, $500. Although there was amazing skating on all levels of this event, the most impressive skating was during the Best Trick battle. This event came down to Erik Baily with his Sweaty 360 Top Soul over the Golden Arches vs. Stephane Alfano and his 540 disaster TTS from quarter to quarter. The judges were so blown away by the Frenchman with his huge disaster tricks and the smooth American that they settled on a even draw between the two.

Anyone who was not able to make it out to this event should make a point to come next year. There is a thriving community of rollerbladers throughout this world, and it is event liek this that make our world as rollers seem a little smaller. Mad props and respect to Pam and Richie Valasquez for making events like this come to life. And also to Matt Mickey and Arlo Eisenberg for keeping the crowed alive on the mic! — Scott Moffat

Thanks to all who made it out…

thanks for the pics. and big up for alt’ing every pic (yeah, the description) cool!

YES!! This is what we need. Someone with photo skills could really make a difference right now. Lets think about the big picture here: when fools go skate nobody uses their photos like this i.e. lots of shots to get the word out.

Peeps tend to only promote a few clips here and there but where is JB Snyder or Joe Navran with a quality edit promoting the ONE website?

When u think about it lots of our industry videographers are greedy so thank you Scott for finding the art in hard work. Its not a lie to presume most of u are lazy.

I’m stoked that everyone is so appreciative of my photos. I’m just trying to make rolling look good, because it is so rad, and how else can anyone who was not at the AIL see that without this photos. Be on the look out for coverage of the LA All Day Finals!!

your photos are great! tough to make a contest look good and you certainly did it!

Thanks John, I will. Look out for the LA All Day Finals photos!!!