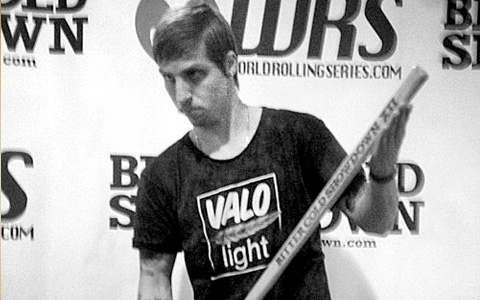 Last weekend Alex Broskow won his second Bitter Cold Showdown. His first win came in 2008 at The Flow in Columbus, Ohio. In the four years since that first victory Alex has been busy touring the world and constantly upping the level of what is possible on blades. Backside pudslides on ledges? Check. Illusion spins to disaster grinds? Check. Mastering your vocabulary switch? Old news for Alex. From his earliest days of beating the biggest and meanest stunts into submission, AB is now finessing the most technical and defined tricks into effortless maneuvers. The impact he has had on blading is impossible to ignore.

We thought it was a good time to touch base with the BCSD champ to get his thoughts on the comp, some words about “Pariah,” and to see if he knows anything about what happens in the deep, dark corners of the rollerblading interwebs.

Alex, hey, congrats on the win. During the finals I was running through the back room for a fresh battery pack and saw AJ. He asked what was going on. I said “Alex is doing some fucked up shit!” to which he replied, “He told me he was just gonna fuck around?!” Ha ha. So, how did all that work in your head?
Thanks. I told everyone I was just going to fart around, ha ha. I was just trying to have fun out there and see what happens. It’s tough competing at the same park on the same stuff while still trying to do new things. So I just wanted to have fun and not take it too seriously.

You’ve caused controversy in the past at BCSD (and other events probably because people love to project their opinions and thoughts on to your actions) for “not skating hard” or “just skating the skateboard rail.” But anyone who pays attention realizes that you’re doing your thing and working on hard tricks. Anything to say about that disconnect between reality and public opinion?
I’m not really sure what makes something a “skateboard rail.” Before I even got to Detroit I already knew that I only wanted to blade the kink rail because I have fun blading it. And that was my main goal for the day. I’ve bladed the full park in past years, and this time I was just planning on blading the kink rail and having fun with my buds out there.

What’s more important to you in a situation like that, landing your trick or winning a contest?
Definitely landing the trick. 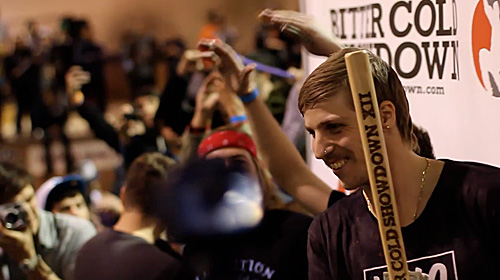 Besides winning the contest this weekend you had a badass section in “Pariah.” How long did you tour to film your part?
Thanks, I’m happy with how it came out. I only went on two trips, an east coast trip and a short, rainy Arizona trip. The rest was filmed in Kansas City while AJ was in town.

Can you tell us some about the creative direction of the flick? This one seemed to morph and shape shift a little from inception to completion. How did the look and feel come together — can you speak to that?
A lot of us weren’t really feeling the “20 concept,” and some of the guys AJ wanted to be involved were hurt, got hurt, or were busy with other projects. So we all decided that making a more traditional style video with all the dudes that could be a part of it would be better. We wanted it to be a more straight to the point style, no bells and whistles kinda thing. I like it a lot; I think AJ nailed it.

What did you tell me after the premiere, “Toe rolls, they’re not just for _____”? I totally spaced on the end of that phrase but it was funny.
Ha ha, umm, I don’t really remember. Maybe “not just for fucking around”? That probably isn’t it. Hopefully it was funnier than that.

Alex that 540 allyoop topsoul was not sloppy! I have a bladegasm everytime time I watch it! haha great read guys.

I was there, cheering, when you finally laced that 5 grab sweat! I managed a mizou to sweat miss to right hip on the rail. My hip is just now finally not hurting.