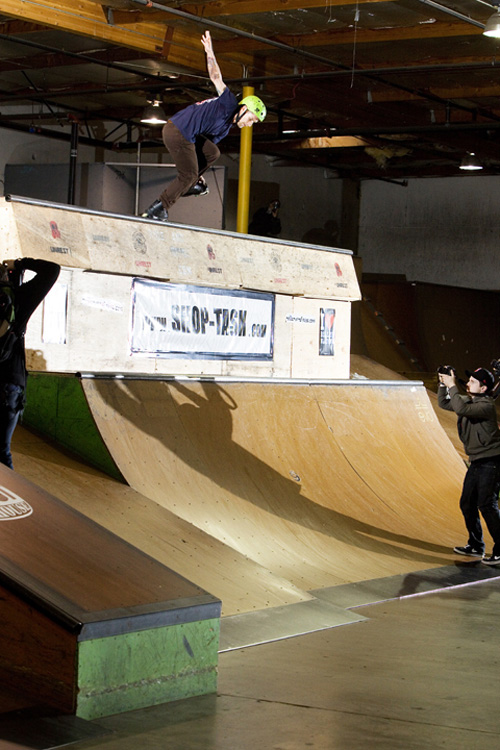 Written by ONE Staff - Published on Tuesday, April 5th, 2011

In Seattle, where we get rain seven to eight months out of the year, indoor skateparks are a must for anyone dedicated to the art of rolling. What is even more miraculous is how the park has endured a myriad of changes, everything from a more generic layout catered to other sports (skateboarding, bmx, etc.), management, a slew of different owners. The place has teetered on the edge of financial ruin on more than one occasion. Through the years, the Skatebarn has remained the hub, the beating heart if you will, of Seattle rollerblading. Only through the tenaciousness of the people involved is it possible that events like Barn Burner can, and will, return to Seattle, year after year.

The competition format went on like it did in previous years. The skaters were divided up into heats. The skatepark was then divided into two sections. Each section provided different obstacles and ramps that skaters could perform tricks on. Each heat took turns on their designated section of the park. Skaters were judged on overall performance through each section. This format has been the fairest way to judge skaters with varying styles. The judging favored technical/line skating and big trick skating equally. The top seven skaters were then chosen to skate in the finals, where they could utilize the entire park in a 10 minute free for all.

Every year, through donations and volunteers, Skatebarn is able to build a few new obstacles. This year Skatebarn reinforced the quarter pipe hitching post and added a spine ramp that skaters could either gather speed on, or use to boost and perform aerial maneuvers.

Perhaps one of the most surprising things to occur this year is that Barn Burner has crowned a new champion, a young local at that. Considering the caliber of skaters that attend this competition, this is quite the monumental feat. It brings about the question, is rollerblading gearing up for another changing of the guard? I think this is a sign of new blood ready to make its mark on rollerblading. Congratulations go out to Josiah Blee. A big thank you to all the volunteers and sponsors that help make this event possible. — Erik Allas

Erik Allas is a fucking faggot and a terrible photographer.