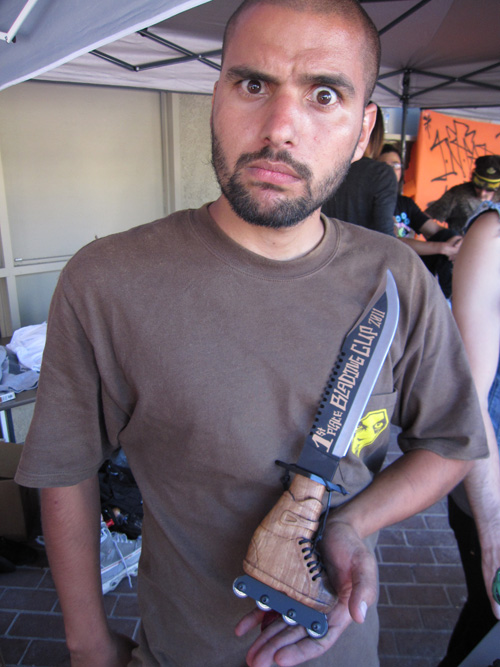 EVENTS: Snapshots from The Blading Cup

Written by ONE Staff - Published on Sunday, August 7th, 2011

The little wheels are bearings. You love it.

This here’s Nick Wood. That big knife he’s holding? That’s the custom-crafted ceremonial champion’s blade, hand-engraved and carved by Sayer Danforth. Nick here put his hard work and ramp-building know-how to use, helping JJ & Co. pull off what many were calling the most fun and best Southern California event in recent memory. If you weren’t there, well, this is some of what you missed. — ONE

Obe getting his stretch on.

ESG on the goddamn mic.

Pharm and some pearly whites.

Sean Sea skunked us out with fresh paint.

Judging by the holes in his shirt and jeans Russell shouldn’t have been so sweaty.

We traded snapshots with Ivan.

Can you handle the history?! B Love and Louie Zamora.

Sean Keene is touring with RB at the moment.

You gotta just say Mister Mike McMullen because, well, because.

E Rod was doing his thing.

We hope Brent never takes these off.

They say you learn something new every day. Today we learned that Sayer carves wood, too.

The source of 50% of all blade lingo. Hayden Ball-ing.

Kennan Scott is the source of my ridiculous AIM handle. AIM—that’s how long ago we’re talking.

Toby was in the zone.

We dropped ONEs all over for the public to scoop up. All gone in no time.

John Starr and his family. Congrats!

JoJo Velasquez bladed hard and built up a hunger.

Rachard flashing us that Bill Cosby smile. Richie freaking you out.

Nick hopped under the wedge to reinforce.

We didn’t see Anthony Williams blade, but he was hanging.

Calkins is enjoying the West Coast.

The parade of history continued with Randy Spizer.

Everybody say hi to Billy Prislin.

Matt Andrews wanted to jump off a roof for old time’s sake but instead just made us laugh a bunch.

Wildman Brian Jaggers was blading. You can all die happy now.

Did you think JB Snyder would show up at the Blading Cup? No, and neither did we.

Shannon Rodgers lending a hand and smile at the Conference table.

The fine folks of Santa Ana seemed to dig the blade comp.

Have you seen Brandon’s latest release, “Regardless”?

This woman summed up the event for me. If she was interested in what was going on, someone did something right.

More people. The surging crowd drew attention from the cops.

A completely shit photo in which Haffey just so happens to be mid-air between a wallride and grinding an incredibly sketchy rail.

Why’s the man always trying to bring us down? Probably because dudes had open containers. Come on, son!

Well, well, Aragon skated super hard and took top honors. Check the WTF look at that knife. Bonus question: Has Aragon ever won a piñata before?

These dudes are good and shit.

With winnings burning a hole in his pocket, Bailey picked up a little charm on the way back to the pad.

The JJ Wall of Fame.

Great work Jon, and everyone who made the Blading Cup a success. We look forward to next year’s event, which we’re told is already in the works.

Beau Cottington posted his edit. Check it out:

Great post! Amazing to see so many bladers there. Nice job all around.

what, no anjie walton pics? awwwww….