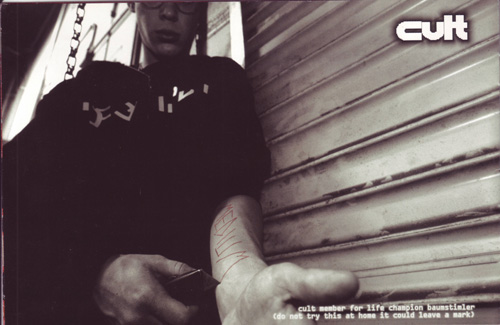 From March 1996 to September 1999, Shane Coburn worked at Tribe Distribution as the brand director of Senate, 976 Launderings, Super Computer Robot, and Color Theory. For those that do not know, the all-mighty Tribe was the umbrella of the Bravo Corporation that handled the aggressive market. Check out this article at Rollerhome by Lawrence Ingraham about Tribe and this promotional film Channel Zero. The giant warehouse and private Tribe skatepark seen at various points throughout gives you an idea of how big rollerblading and the Tribe empire was in 1998.In addition to his work on Tribe’s other brands, Shane started Medium Urethane and Cloth. In a time when skate videos were starting to move from a mainly punk rock soundtrack to one with a more hiphop feel, Medium came out with videos full of ’70s classic rock and ’80s hair metal; the kind of songs that you hear coming in on the only station you can pick up with bad reception at 3 a.m. while driving across the middle of America. Medium videos boast the first sections of many of your favorite pros like Pat Lennen, Brian Shima, and Dustin Latimer.

Oh dang. Medium…Ahhhh it kills me to know Medium doesn’t exist any more.

They were the highest quality and juiciest wheels in their own way. The best quality Medium wheels IMO were probably the Raphael Sandoz “Swiss Watch” wheels. Pure quality.

What age was Shane Coburn when he started Medium? I find it difficult to believe he started these companies when he was only 21-23.

Oh wow this was a great lookback i must say this collection and presentation of it all was really a charm to kinda fall back a few years and flashbacks, medium was def a great company and had there reign at a time.

Thanks for that link. Who’s Tom

I would give anything to have some of those medium t-shirts, Shane do a re-run I beg you!!! I need the Corporate t-shirt in red! more than I need food.

My First Girlfriend Ran Off wit My White Medium Down Logo Hoodie. Medium was the Ruggedest of the Rugged.

Medium still is and will always be my fav company, I still have a bunch of stuff, even a hoodie!! Shane Coburn is the shit!! He has done so much for Rollerblading…Jake Elliott has always been a great friend of mine, and is my sons God-father. We met skating one day sometime before Shane and DAP came to film him for VG3…

another great article by Ben Rogers. Smell the Glove was a nice postscript.

This article is great I still own a Medium tee somewhere the one with sirrenges and shit in the logo, at the time it was the most badass company and had an ill team those were the days of Champion . Great read

Medium!! Yes!!! These lookbacks are just getting better and better!! Would like to see Rise Above, 3rd World, 976 Launderings, Fiction..

I still have a black medium arrow shirt. And I will forever. Long live the most innovative skate company ever.

I still have that hoodie Champion is wearing on the first pic.

my friend kept all our crews skate parts. He still had my Higgs boson theory anti- rocker wheels. I’m using them now on my new valos. i would dump all my money into the company if they made a come back. They made Quality stuff.

I used to think Shane Coburn was a genius but I was young and no idea about Ed Templeton and Toy Machine or skateboarding culture. Medium heavily ripped off toy machine for sure, some ads are almost identical to the Toy Machine aesthetic.