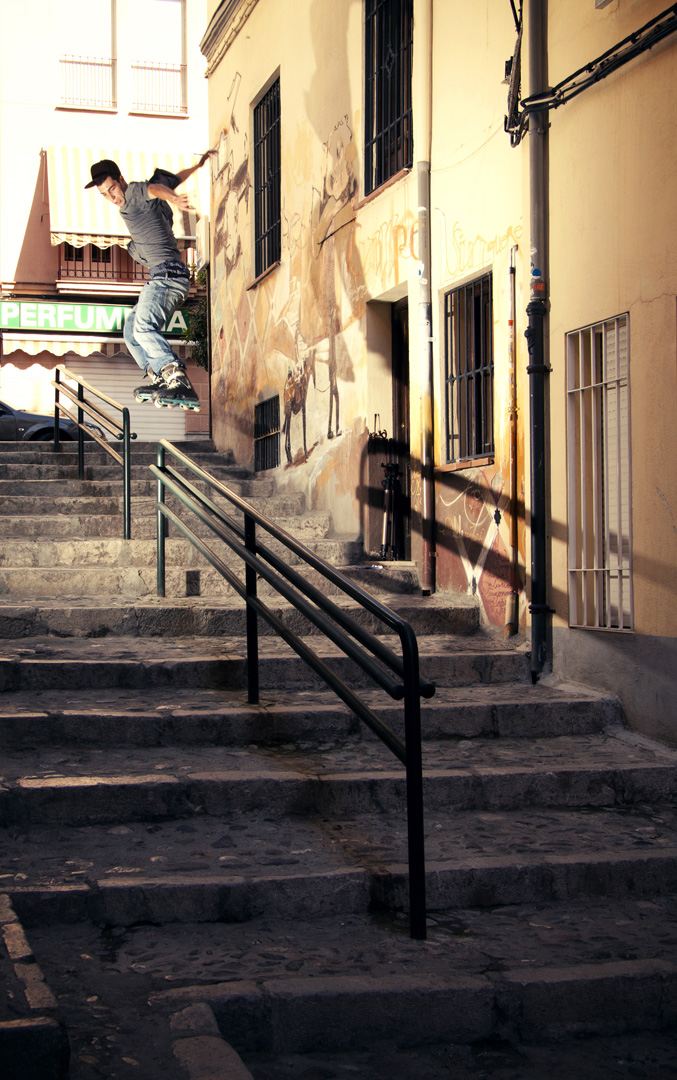 It was a typical hungover Saturday in Granada when the phone started to ring at 12:35. It was my man Javier calling, saying they wanted to meet up at 1:00 to go to a spot that we’d been talking about for ages (and that I had wanted to shoot for a long time). So I jumped out of bed, quickly picked up all my stuff, got out of the house, and bought a coffee on the way.

To warm up, we first went to some small rails on the way to the main spot. And when we got to the two tranfer rails it was perfect! No cars on the approach, and no cars on the way out! (Something that is not very usual here.) To set up, I placed my only flash (Metz 45 ct1) on the left side while Javier was triying the spot. It took him a few tries to get it done, and suddenly a neighbour came out — this typical old Spanish lady in her night gown, with curlers in her hair — and started to complain about us. She was saying wild stuff like, “This is not made for doing that,” “I hope you fall down,” and stuff like that (she was actually funny). Javier didn’t give a fuck about her and kept blading so I stayed there with my cam, and then, the first try after the confrontation, he did it! And I made my shot! That’s when the old lady started to call the police. I went to her and proudly showed her the shot I made, and we left the spot while Javier was screaming, “Take that, old lazy bored lady! Take that!” — Lino Adriano

I used to live in Granada with my Spanish Girlfriend, saw these before but as im not man enough to do the rail to rail, the run up killed my single rail efforts 🙂