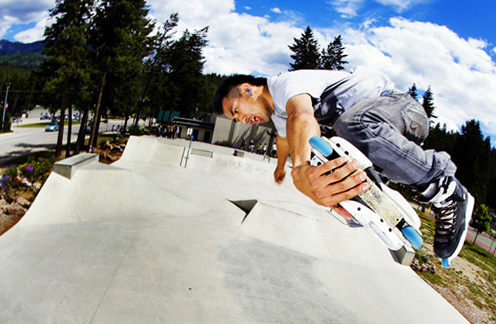 On our way to the Kamloops Popularity Contest this summer, the goal was to skate as many skateparks as possible. First stop was the town of Golden and their amazing skatepark. A relatively new and small park, but extremely well-built and empty! For a few hours we had the park to ourselves. With an empty skatepark at his disposal Jack Phavone took advantage of the opportunity. He began charging from one end to the other and launching massive airs out of the quarter bowl. I suggested he throw down a few different grabs and we get a photo. We settled on a Cross Grab Liu Kang, I set up three flashes, I tried a few different angles, and this was our result. — Chris Wedman

Awesome photo man. Those blues in the sky and in the wheels are intense!