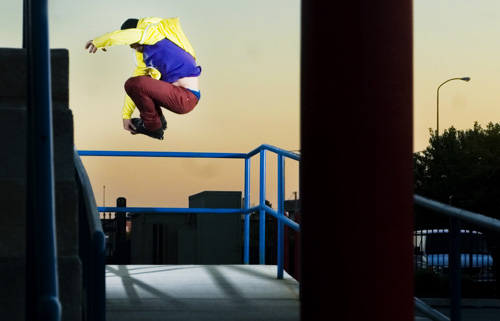 Drew Amato, riding high on his cover shot of Colin Kelso on ONE #11, just hooked us up with another Photo Journal submission. So check out the full view of this Steve Iacono shot and read the story behind the image when you follow the link…

Most of our days consist of the two of us sitting on the couch playing either Madden ’09 or NHL ’09, but on this particular afternoon Steve and I decided to be productive. The original idea was to re-shoot a photo of a true top soul on this bench down the street. After setting up, it was only a matter of seconds before one of the neighbors came outside yelling like we had just committed a murder. After breaking everything down, we started driving down the street when I noticed this launch over the handicap rail. With the sun starting to set, Steve made a U-Turn in the middle of traffic, and we pulled in. After warming up like an idiot with a 360 over the rail, I grabbed the telephoto lens and snapped this 180 over the rail with the Philthadelphia sun setting in the background.— Drew Amato