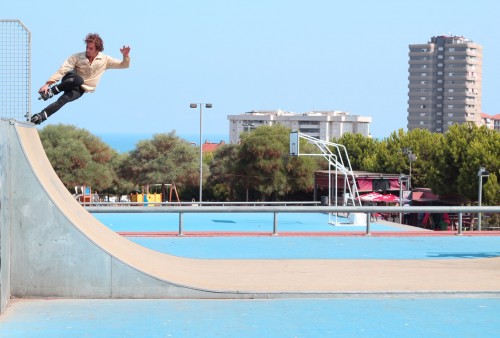 A trip to Barcelona has now become a quest of who can find a spot which has not already been filmed to death. This was one of our first days in the city. Un-acclimatized Brits in the 32°C heat, we were led by Richie Eisler and Dustin Werbeski up what can only be described as a small mountain. The reward — almost at the sacrificial expense of a group of the UK’s pastiest, sweatiest rollerbladers — was a quarter mile downhill stretch of banks, floor rails, a small skatepark, and a cafe that sold beer. And as far as we know… all unfilmed. Dustin came through with this soul along and up the outer edge on the mini-ramp to Fishbrain stall right on the corner. — Jake Eley