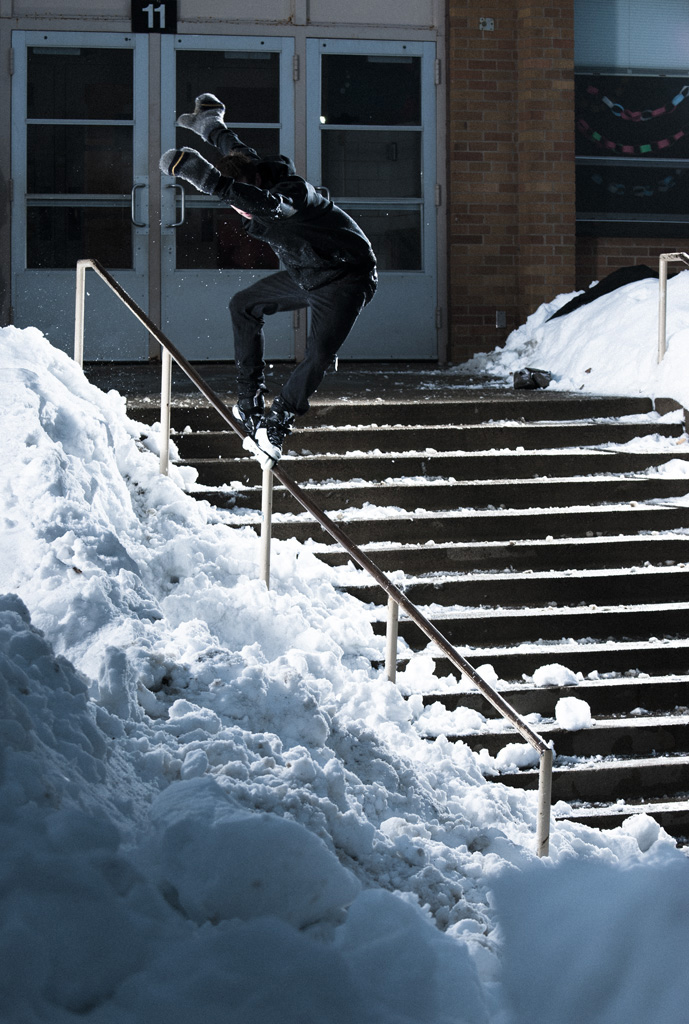 A good photographer knows how best to communicate with their viewer. In skating, that frequently means expressing your vision through someone else’s trick. Unfortunately, a battle that we face all too frequently is that we have seen the trick so many times that we develop a “right way” of thinking. For example, how many topsouls on drop rails have you seen? A battle I frequently fight is waged solely on trying to break norms of how a skate photograph is “supposed to look.” A lot of times that battle is mine to fight alone, but other times I get a lot of help from a skater (think people doing super creative moves). This photo I took of a long-time friend doing a trick he invented is an example of a battle that he won for me. Super normal rail, super normal photograph, but to the skate-trained eye, this trick is far from normal. Ben Fredrikson did this trick, and I communicated it to the viewer.

A long time ago, tricks were being invented all the time. However, the times of “inventing tricks” are, for the most part, past. This photo is like hiking in the jungle and finding a new species of frog. We know there are frogs, and where they may live, but this one is different. We know tricks, we know rails, we know topsides and we know negatives, but this is (to my knowledge and that of my assigns) a new trick all together.

Skating is extremely creative. One of the most interesting things about creativity is how it evolves. For a long time being creative in skating meant grabbing a fishy with your opposite hand, or spinning more in to a topsoul. More presently, skating creatively has involved a combination of spot finding and resurrecting forgotten tricks and putting new flair on them. That is badass, but for this photo journal, enjoy a little old fashioned grind inventing. Folks, I give you the Loathing grind, courtesy of Ben Fredrikson! — John Haynes

So awesome… I love your work John! This shot is great… Super cool and dangerous stunt too!

Thats pretty mental, it looks like it should be a top mistral but on a closer look one then realises its a Loathing grind 😀

fuck yeah freddy!!! pretty sure you are the only person who’s ever done that grind, let alone on a down rail in the MN winterness!! GIVE EM THE BIZZZ MAHH BOY!

Thanks Pete! And yeah I think I am the only one to do this trick…unless someone can battle me. And that was my last time EVER going back to Valley View, it is documented in the clip

Ricardo Lino did it like 6 years ago on a kinkrail