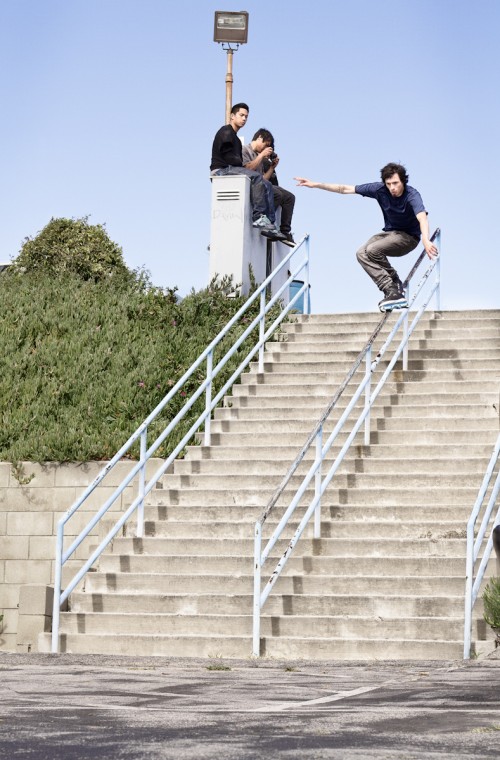 It was the summer of last year. Filming for “Take Your Time” was in full swing with sessions almost daily. On one of those excursions, we ended up at this rail in El Segundo, CA. Some of you might remember it from the end of “Teach Them Well” when Steven Cortez, Ranier Piramide, and Ryan Santos went back to back on it. It’s a burly rail. 30 stairs long and steeper than day old tea. A friend of mine took a nasty fall which sent him chest first down the last few steps with ridiculous force. It’s a miracle he was walked away with just a few scrapes and bruises!

So it threw me through a loop when Ricardo Marquez opted to go negative acid on this! I asked if I could take a photo of it and he was all for it. With the bright southern California sun in full force, flashes seemed silly. There was nothing obstructing the light, so it came down to angles. I tinkered with a few — one from far back, a mid range shot, and one close up and from below. Ricardo was a consistent champ for giving this a go about a dozen times. I opted to edit the mid-range photo because of his solid composure. In retrospect, I liked the close ups better, as it gave the rail a more towering feel, but I’m content with how this photo came out. 17-50mm shot at 50mm, 1/500th, f/6.3, iso 160.