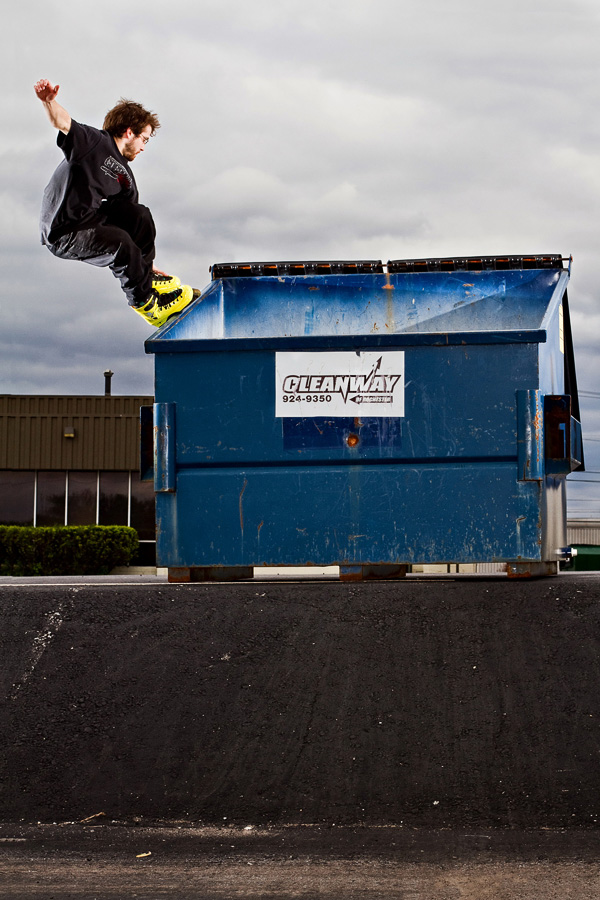 This photo is from a little while back when I was in Rochester, NY, blading for the day. Everybody was skating this bank to dumpster in somewhat of the same way, launching from the bank and grinding or stalling the flat part. Tim had something different in mind and wanted to grind up the dumpster. We shot this a few times, and after a few different shots we came up with this launch to backslide. The lighting setup was pretty basic: two flashes on top of the bank, one right at Tim’s back and another on the other side of the dumpster about 6-7 feet high to light his face, but also high enough that light would spill into the dumpster without leaving a super harsh shadow. With just those two flashes lighting Tim, the front of the dumpster and bank were a little more underexposed than I’d like, especialy considering that I’m already underexposing the sky a few stops to retain detail in the clouds. So I kicked in a litttle fill on the front of the scene from an on-camera flash. Tim and I were both pretty happy with the result as we were trying to showcase his yellow blades, and I think this worked out perfectly with the blue dumpster and dreary skyline. — Nick DeMarchi