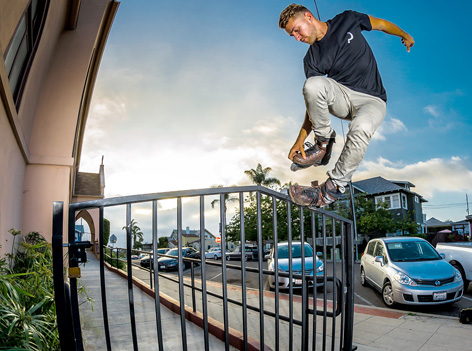 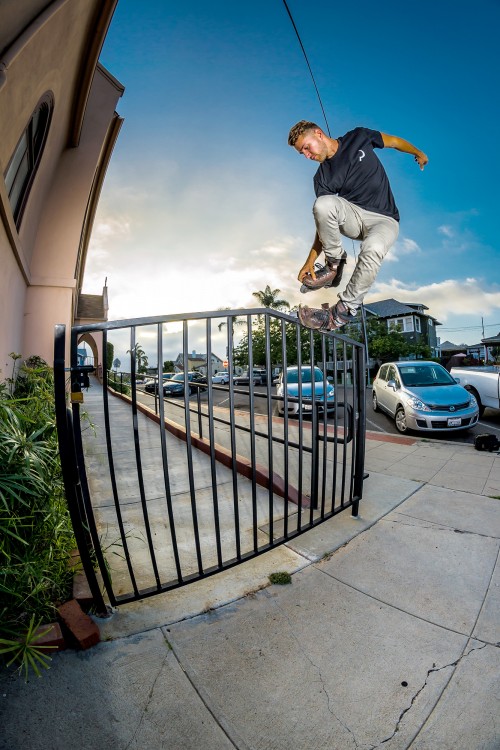 Since my arm was broken and I couldn’t really skate, Garret and I were going on a lot of photo missions lately. We were still new to the area and wanted to find something different to skate, so we decided to just hop in the car and drive around. Soon we stumbled arcos this handicap rail at a church with a gate at the end of it, and knew right away that it had potential.

As Garret started warmup he realized the rail didn’t slide, which is when it was discovered that we didn’t have any wax either. As a last resort, Garret used a spray bottle full of water to wet the rail down and see if it would slide. Surprisingly enough, it did!

We messed around and got a couple tricks in, then decided that a front farf to fishbrain stall on the fence would be the best shot. We tried out a couple different angles, and agreed that the in-your-face fisheye shot would be the most dramatic. After setting up my flash and getting my camera settings correct, the only thing I had to worry about was the timing. Garret’s fishbrain lasted only a quick second, so I had to be on point. I got into position and gave Garret the go-ahead. He farfed the whole handicap rail, jumped up, fished the fence, came out fakie, and of course I missed it. Luckily enough Garret was willing to do it more than once.

Three attempts later I snapped it at the right moment, getting the shot we wanted. In skating photography, timing is key. Timing can change the whole feel of a shot. You can’t be nervous or think about when to snap the pic. It’s best to relax, stay in the moment, and let your instincts do the work.