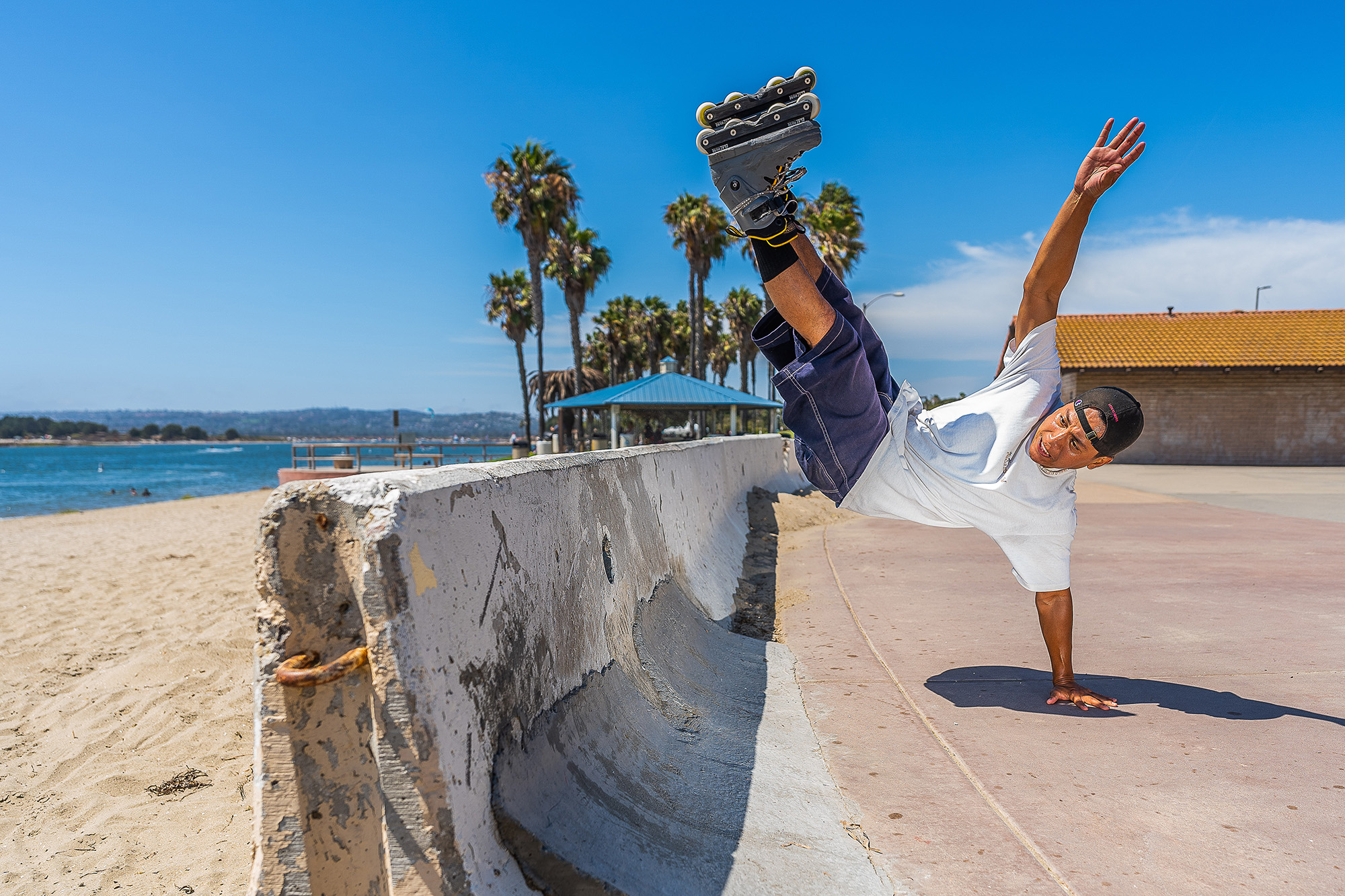 Oli Prado has been a staple in the blading community of San Diego for many years. Oli takes a different approach to blading than most people and that’s what makes him stand out. Instead of choosing standard tricks for various obstacles Oli often finds ways to use his entire body to accomplish his artistic expression.

On Sunday I told the crew that we were going to skate at a DIY spot that I had recently discovered on the bike path of Mission Bay Park. Oli met up halfway through the session and was using the transition to launch his legs over his head and then land back on his feet. Needless to say, I was intrigued as a photographer to see if I could capture that movement against the scenic backdrop.

To capture this trick I had to decide a few things rather quickly and hope that my choice of lens was going to adequately show the surrounding background without being distracting. Instead of using my fisheye and getting really close, I decided to use my Sony 20mm F1.8. I started out with a test shot to see if my flash could overpower the daylight at F9.0 1/250 but the background of the palm trees looked sharp and that was going to be distracting. Also, the reason I chose this lens was for the shallow depth of field and the wide-angle effect so I dropped my aperture to F2.8. The main difficulty of shooting at a low aperture is that it lets in so much light and on a sunny day it is really easy to overexpose an image. I had to increase my shutter speed to compensate for all the extra light but that also meant shooting at 1/1000. In order to add some fill to the shadows, I placed my AD-200 Speedlight at full power high-speed sync with a honeycomb grid on the ground to my right facing towards the subject. This photo was shot at ISO 50 f 2.8 1/1000 Sony 20mm 1.8 Sony A7iii.

When I took the photo I really didn’t know what to call the trick, which is unusual. Is it a hand plant? Is it a rocket hand flip? One-handed handstand? Oli used the transition, planted his hand, pushed his legs up through the transition then landed fakie. I consulted with both Oli and Parker Richardson and they agreed that the trick was technically a Womp to fakie.

Rollerbladers from all over the world need to continue to innovate our sport and create tricks that require strength, agility, and a creative playful mind that questions what is possible with wheels on our feet. That is one of the many reasons why Oli Pardo stands out in the blading community and that’s why you should be paying attention to him in the future! — Steve Steinmetz