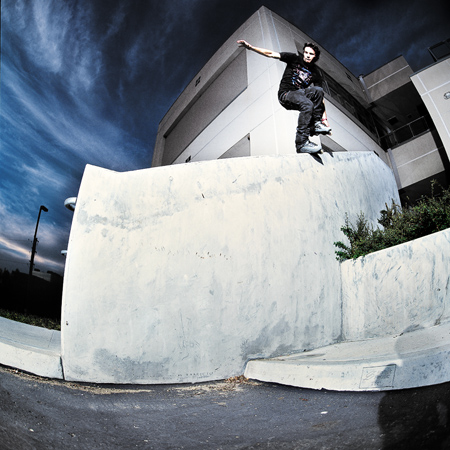 This photo was shot a short time ago here in San Diego. Mira Mesa to be exact. For all of you that are outside California that is right next to Miramar where the classic film “Top Gun” takes place. The lighting I chose to do here was pretty basic and resulted in a quick setup. This was the first angle that I shot from and I’m really happy about the ambient lighting that was going on and the overall composition. The only problem with this angle (besides being overdone countless times) is that you can’t really see that Chris is actually gapping out about five feet to hit this really high ledge. The depth of field gets lost and the approach looks a lot simpler than it really is. That, and you can’t really even see the approach at all! So, moments later I switched angles and captured a different perspective on this spot which can be seen in the V2N1 “Picks” gallery. You will also notice that the dynamics in the sky changed completely once I moved as well. Shooting at this time of day can be tricky because within minutes the ambient light can go from really dynamic to really boring. So my advice is set up quick and get as many clicks of the shutter off as you can before it’s too late. It also helps to bring someone like Chris Haffey along who can lace tricks on rollerblades without parallel.

haffey and driver? bunch of hacks : )