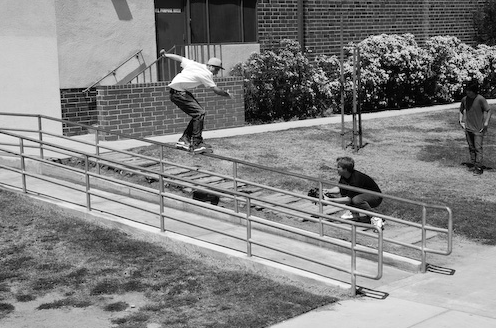 A couple weeks ago ONE was out with Connor O’brien in LA scouting video locations and shooting an upcoming Revolution Skateshop ad. While out and about, a session went down in North Hollywood that led to this sequence of Jeremy Soderburg. Click the link below to read what Wes has to say about the process of capturing this image!

This photo reminds me of several years ago when I dropped $1,200 on the Canon EOS 1n camera body just for the purpose of shooting high speed sequences. I remember the thrill of hearing that chain-driven shutter (that coincidently sounded like a machine gun) capturing guys like Charles Dunkle who, honestly, needed several frames to tell the story of the tricks being performed. Of course, those were the days of film and capturing sequences was a costly endeavor from start to finish. Sometimes it would happen quickly and other times you would burn through 10 rolls of film before getting what you need. It definitely put a strain on me, because when you’re starting out the last thing you need is more expenses!

Gone are the days of film and drum scans for each frame, so these days the desire to shoot sequences should be higher than ever. All the thrills without the hang-ups that once deterred many shooters. Well, almost. The only problem up until recently was the buffer issue that plagued cameras like the 1D-mark IIn. You had to consistently dial down image quality if you wanted to capture longer tricks. At least in the film days you could pop off 36 frames before having to reload! With digital the issue has always been the sacrifice of image quality in order to get long sequences. Not a good thing especially at 8.2 megapixels. Plus, cameras like the mark IIn clocked in at around $4,000, so that alone was reason enough to abandon the world of paying extra for the ability to shoot high speed sequences. That is until now.

I bought the Canon 40d last September for several reasons. The most important being the fact that it could shoot 6.5 frames per second (the perfect amount for blading if you ask me) and the cost of the body was finally in the range of what I paid for a then top-of-the-line Canon back in the day. To me it was the first digital camera to rival that old film body and not cost 4x as much! The biggest advancement, and real reason for the purchase, was that it could shoot up to 20 frames in RAW file mode and 75 frames in high jpeg before the buffer ran out. Amazing to say the least. This not only equals the past cameras in performance and price, but also takes it to a whole new level altogether.

So to all our photographers out there, if you haven’t taken the plunge on a camera that shoots sequences, I say go for it! Now, more than ever, it’s affordable and delivers the true benefits of shooting to a card and not to film. No more film to buy and burn, no more scans that will cost hundreds of dollars per trick, and no more limitations of the 36 exposure roll of film. So, what are you waiting for?—Wes Driver

I also have a 40D, great camera. Pitty they dont have the LCD resolution of the recent Nikon’s though

What would you prefer:

I’ve used both, shot with both and about to make the plunge for about the same price of a new 40D or slightly used 1Ds …. What would you take?

P.S. Thanks for the mag, been a subscriber since Issue #2

I would definitely go with the 40d. The technology on the 1Ds is about 6 years old! It IS full frame, but I wouldn’t go for it. I would buy a used 5D before going with the original 1Ds. But also keep in mind that the new 6D (or whatever it’s going to be called) should be out by Christmas. I’ve been told 16 MP, 6.5 fps, full frame, larger LCD, etc etc.