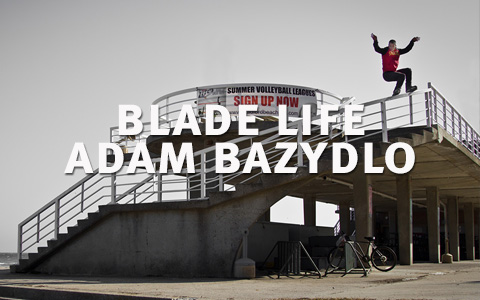 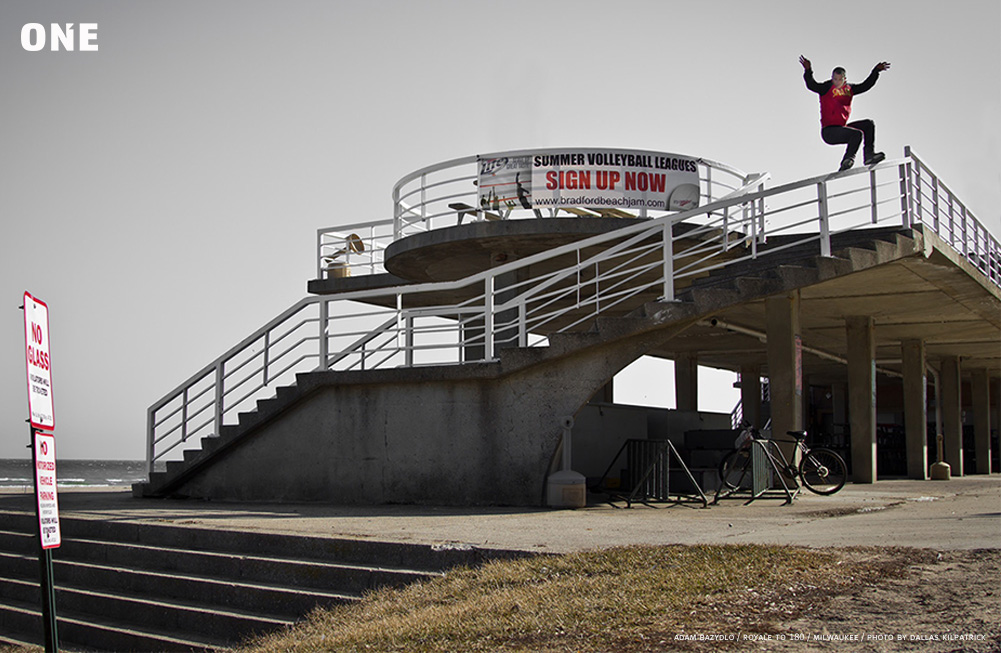 Adam Bazydlo wasn’t the most well know blader in the world before moving to Chicago in early 2013. In fact, he’d kind of disappeared from rollerblading long before he ever stepped foot into the Land of Lincoln. A year later and he has just won Blader Of The Year in the annual Chicago Blade Awards (he was nominated for the other two categories — Chicago Rookie Of The Year and Edit Of The Year. He also took 3rd place in last year’s Windy City Riot). This is a significant accomplishment in a city that is generally skeptical of outsiders and which seems to pride itself on infighting. North side or south side, suburban or city dweller, hipster or actual human being — everyone seems to have accepted Bladezilla into the community. I caught up with Adam to ask him a few questions about where he came from, why he’s here, and how the hell he manages to stay so nice all the time. Enjoy. 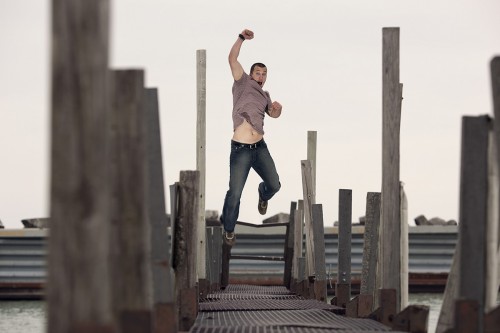 Give me the basics. Where are you from? How long have you been skating?
I’m originally from Syracuse, NY. I lived in Atlanta since I was about nine though. I started rollerblading around 1st grade (1992). By 1995 I was going off ramps made out of brick and plywood with all the neighborhood kids. Rollerblading has always been second nature for me. From the first time I put on my first blade, I was riding down the aisles of Toys ‘R’ Us with a shoe on the other foot.

Being from a few different places, is there a skate scene that you call home, or an area where you think you developed as a blader?
For sure! I would definitely say the Dirty Dirty is my home and was my biggest influence in rollerblading coming up! I had guys like Walt Austin, Kevin Dowling, and Steve Jones to follow. It was all hammers and gaps back then so we just did our best to try and go big! 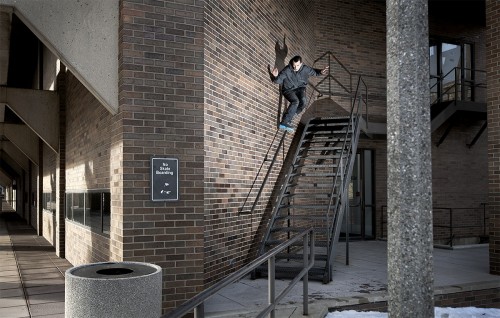 You recently relocated to Chicago. What brought you here and how are you enjoying the city so far?
I got a promotion at my company and taking the job meant moving to Chicago. Kaydee (my wife) and myself had never even visited, but we knew Chicago would be an opportunity and an adventure. Chicago has a harsh unforgiving winter, but if you can withstand that you are rewarded with the glory that is summer. By far the best summer I’ve ever had as far as spots to skate, things to do, and overall perfect weather.

How is the Chicago scene different from other places you’ve lived?
Chicago is one of the best blading scenes to live in, period. Motherfuckers were calling me up in January when it was -20° outside. The Chicago blade scene is as RAW as it gets. Blade Chi or die, suckas. 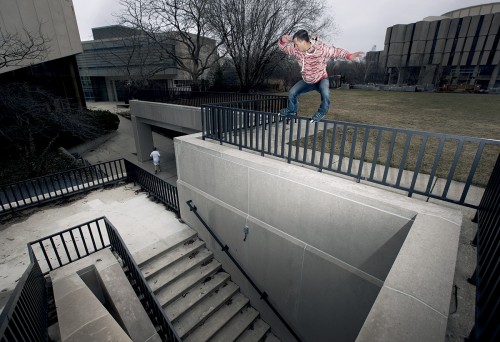 What do you do for work?
I work in Business Development (outside sales) for SharkBite! (Reliance Worldwide Corp). I sell fittings that make it possible for any homeowner to fix a leaky pipe without having to call a plumber. Oddly enough, it is illegal to use the fittings in the city of Chicago. So my company sent me here to see if I could put a dent in that armor.

Outside sales jobs aren’t really known for being straight 9 to 5 positions. How do you balance your professional and skating life?
Yeah, sometimes it’s tough because I have to balance blading and working around other people’s schedule, but it gives me the opportunity to work in new areas that I wouldn’t have normally seen, and that’s when the opportunity comes to put my blades on and shred. For me, it’s about taking the time you do have and utilizing it. If I have 30 minutes between a meeting and I’m in rural Illinois, I’m going to look around and find an obstacle to skate even if it means doing a trick on something no one has ever bladed and might not ever again. It makes it all the more validating because this job is what allows me to find unique spots like that. 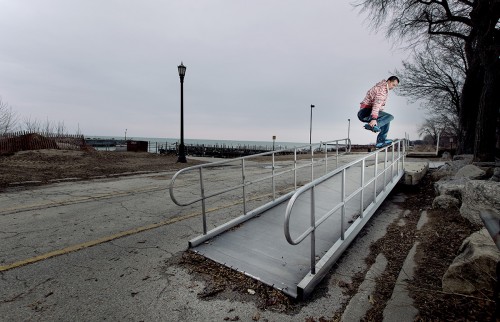 You seem to make an effort to skate as much as possible. Do you set goals for yourself for how often you go out or for what tricks you want to do?
It’s not about skating as much as possible. It’s about skating as much as you can. As we grow older we have more priorities and things to do in our everyday lives. For me it’s about KNOWING what tricks I can do and being ready to do them when the moment feels right. If I drive past a perfect drop rail I’ve never seen done, then maybe it’s worth stopping and getting a quick topsoul or back royale. For me it’s not about how many edits or clips you get now, it’s about watching those clips and videos in 5, 10, or 20 years and knowing that you were able to do so when you could… and you did. That’s it. As far as goals, I think about tricks the same way most bladers do: I see spots and have tricks I wanna try, but I don’t ever set goals on what I “must” accomplish. Only tricks I WANT to do.

A lot of bladers prefer a certain style of skating, whether it’s technical, creative, stunt, park, street etc. Do you have a preference? And is there an aspect of your skating you wish you could improve?
I wish I had the patience and technique to learn coping! We never had skateparks growing up so it’s something I neglected most of my blade life! I love stunts and big gaps (wall rides are my favorite), but coping is my lifelong battle to conquer! 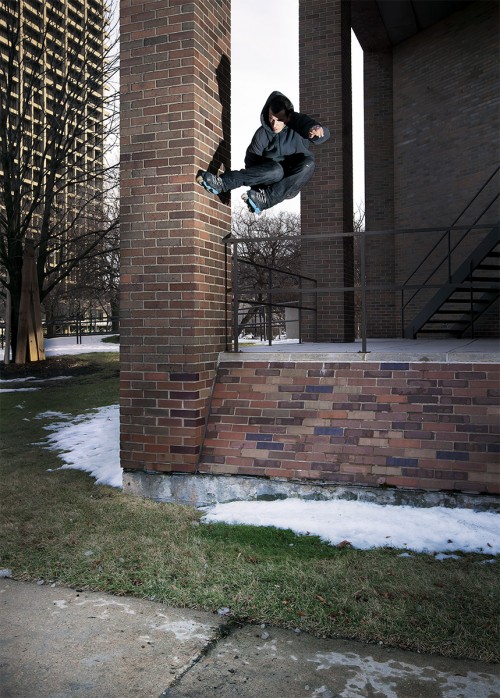 It seems there were a few years you disappeared from the skate scene. Where were you and what were you doing?
I fell out of rollerblading for a minute when I went to college in south GA (Valdosta). There were basically no spots and no one else to blade with, so I made due with the occasional trip to Tallahassee for blading. As far as activity goes, I made use of time by getting involved with Rugby and learned a new form of discipline and how to work with/as a team. I think this played a huge part in my comeback to skate this year. Rugby teaches you to not give up and to keep pushing when you’re at your weakest, and that sort of thing really goes a long way when you’re skating in a contest like the Windy City Riot.

What made you decide to commit to skating again after college?
I didn’t. After college I started doing construction and playing competitive traveling rugby. I basically hung up my blades for 5 years, only putting them on a couple of times a year to meet up with friends. I was still living in Atlanta at the time so I still had the same friends. When I moved here this past year I didn’t know anyone, Brian Bruno was the first to hit me up to come out and skate and I even put him off. Rollerblading was a way to meet friends and have hobby in a new, strange, big city. 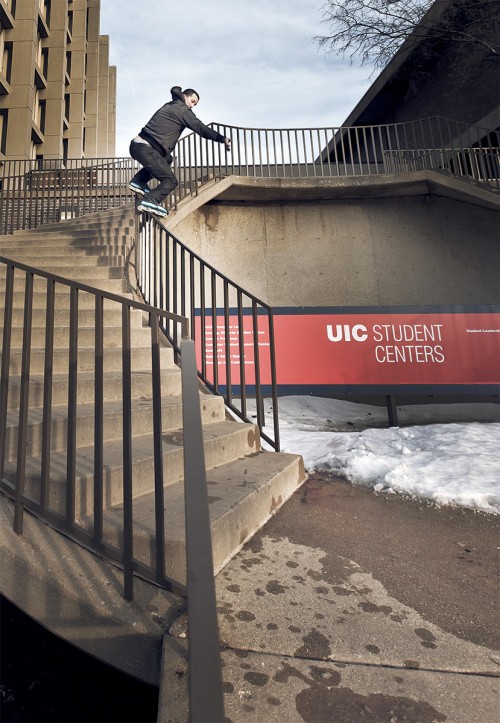 You have established a reputation in the Chicago scene for maintaining a really positive attitude. Does that come natural to you, or have you had to learn that?
Having a positive attitude is something you don’t learn but you definitely have to practice at. I’ve always tried to see the good in things, but at the end of the day it comes down to this: We ALL have so many assholes and shit we deal with in every day life that test our mood and push our buttons. Why spend your life being one more cunt that makes people miserable? You can see the best in your homies and try and make the day better, or you can shit on it. What’s it gonna be?

Are you working on any blading projects right now?
We just finished up the 2013 Chicago Mixtape and have already begun filming for 2014. I look forward to blading into 2014, and have a number of contests and events I plan on traveling to this year

Shout outs?
I thank everyone who has ever had confidence in my blading. Kevin Dowling, Steve Jones, Mike McMullen and Jamie Olmsted are a couple names worth mentioning. Without them I never would have gotten noticed or given a chance. Thanks to everyone who still gets nervous at the top of a drop rail. It is that feeling that keeps us driven to succeed.

Shout out to Fear and conquering that bitch.

Check out this teaser of Adam’s section in The Chicago Mixtape. Available now as a digital download!