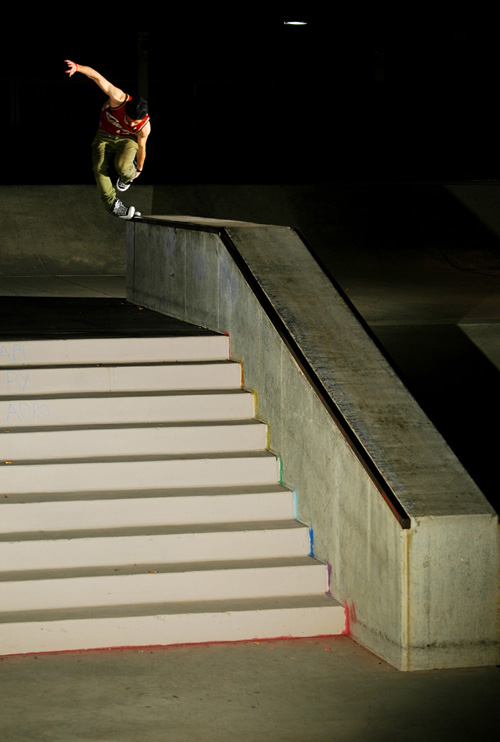 Andrew was one of the first people I met when I moved to Arizona. My fondest memory with him is one of us, sitting in a lineup outside of his car on the California-Mexico-Arizona border. On the way home from a weekend trip to San Diego, sometime after midnight we were stopped by Border Patrol on Route 8 because an empty container in my backpack, once containing a certain California medicinal substance, had alerted their search dogs. I remember sitting there as Andrew whispered threats to me, telling me the horrible things he was going to do to me if we got in trouble. After an intense couple of minutes, they decided that we weren’t illegal immigrants, and four kids with a trunk full of rollerblades were more of a paperwork-induced headache than any real bust. They let us go with a few snide comments about our haircuts but the rest of the ride home was all laughs. I don’t think you really bond with someone until you travel with them. I’ve gone on a few road trips with Andrew since then, each one providing more and more memories. A few months later we were on another trip to California and a kamikaze seagull or some weird bird got stuck in the grill of our rental car and was just hanging there the entire SDSF weekend. Andrew is always doing gnarly shit and skating hard, whether we’re out filming, he’s in a contest, or it’s just another night at a TNS. His skating has come a long way, this past year especially. He’s a good friend of mine and a pretty cool dude, so I figured I would sit him down and do a quick little interview. Luckily, he lives with fellow ONE contributor Kris Troyer, so getting these photos was no big deal either… — Ben Karris

Alright, let’s start this with you Andrew. Who is “Beef,” and why does everyone here call you that?

Ha ha, well, I can’t remember an exact story behind it. I used to eat a lot of beef jerky years ago, but one night that got the whole thing goin’ was an AZ trip to San Clemente. We were at a hotel in Lake Forest, chilling with the AZ guys (Luke Kimberly, Chad Hornish, Ryan Daily and Kyle). I was tired and trying to sleep on the floor with my arms crossed, but had a few drinks and was feelin’ good. Kyle mentioned how “beefy” I looked sleeping there with my arms crossed. My reply was “You’re just jealous that I’m buffer than you.” Ever since then it stuck; I’m not sure if it has any other meaning than that. That’s just what I remember about how it came about.

Yeah, thanks to Brent and X, people still call me “urBen.” They sure do love the nicknames here in AZ, ha ha. So, what’s it like living with nothing but rollerbladers, being a resident of the now famous Tempe Blade House?

Yeah, I’ve noticed that. Well, it’s definitely interesting. There are always people here. Whether it is some of the local AZ kids here chillin’ inbetween sessions or people from out of town. Weird thing is, none of us get to skate with each other that much because we all have crazy schedules. We’ve known each other for a while (except Troyer), so we know how to have fun when we all happen to be at the house at the same time. More recently there is another addition to the house, one that we have all know for a while, so things should be getting even more interesting.

New addition? What about Mike Dritlein?

Jacey (Heimer) will be moving in. Ah yes, Drit; the couch dweller. He is definitely a trip. Nicest kid you have ever met, yet he is random as hell. Him and the house dog, Pegan, share the couch. She tends to be in control of the couch though.

He’s a chill dude. So, you’re an AZ native; what was the scene like when you were a kid? Has it always been like this, you know, pros coming and going every week, huge sessions nightly?

It really wasn’t, Revolution changed the scene a lot. Growing up, we didn’t have cars, cell phones, and TNS. We would just randomly assume that someone was at the park or their house, which usually involved hours of commuting by means of bus, skates, bikes, and parents. We knew of other bladers here in town, but it was rare getting to see them at parks or out street skating. Occasionally, we had the random pros that would come into town for the Kill or Be Killed street contests, but other than that we never saw, nor heard of them being here. The scene was real cliquey, and the older guys we did know didn’t really like skating with us, so it was hard for us to go out and get motivation from the other locals.

That’s hard to imagine, who were some of the older guys?

What has it been like having a younger brother who skates? I’ve been on some road trips with you and Kenny and it’s funny watching you two bicker. Especially when you guys scream and bitch at each other and then five minutes later politely ask if the other wants something to drink when we stop.

It is what is. I mean, we grew up skating together but were raised differently. So we always clashed and fought about the dumbest things. Nothing out of the ordinary for siblings. We both are different skaters and people. But it is crazy to see what he’s done with skating, seeing as I never really let him come along on many of our skating excursion, because, well, he’s my younger brother. We now share a lot of the same friends, which normally doesn’t happen with siblings, so that’s had its own role in how we act towards each other.

I still think that he looks like Ashton Kutcher. So, let’s talk about injuries. You’re hurt right now? How did this one happen?

He does sadly, and yeah, I’ve been hurt roughly every winter the past five years. It’s crazy and shitty at the same time. This most recent injury is from the “A Chosen-Few” Street Contest Finals in LA, which is put on by Quinn Feldman. Second spot was a rail that was skated by some of the best in the game years ago, and it is a scary rail at that. I was going for a second attempt at a disaster alley-oop fish on a rail over mud and a short piece of sidewalk, and had mud in my wheel. As I approached the rail my wheel caught on the shitty asphalt and my body lunged forward, almost smashing my face into the post of the rail. Luckily it was only my shoulder, but my knees where a different story. Left knee scrapped across the top of the sidewalk while my left knee slammed into the corner of the curb, cracking my patella.

Damn, that sucks, but at least you’ve got a little girly now. I’m sure that will make the time off of your blades go by faster. Do you think you’ll still go to Bittercold?

Yeah, I have a great relationship with my girlfriend and she understands what rollerblading means to me. It does suck, but at the same time I’ve needed surgery on my right knee for a torn ACL and MCL, so I’m considering getting that fixed which would put me out longer. As for Bittercold, it will depend on the damage to my patella and if it heals right. I would love to go and compete, but if my body isn’t up for it it’s just not worth risking more injury. I still might consider going just to go, because it’s a great event and I get to chill with my friends from all over. So we will see. (Ed’s Note: Scherf didn’t get to BCSD XI.)

Yeah, it’s best to heal up. How did your relationship with Kato start, and how did you end up riding for REMZ?

I’d met Kato plenty of times before actually getting flow. He has family out here in AZ, along with him and James Johnson (Revolution owner) being good friends, so he frequently visits. During the last two years of going to BCSD, or any other contest, I would just skate the bowls or minis with him and James and have a good time, then enjoy a few drinks after skating. As for how I got flow, it was all thanks to James and Geoff Acers. I had grown up wanting the OG Freedom-of-Feet Remedyz and could never afford them, but the new boots changed it all and I instantly liked the new Remz. It was always my dream to ride for the company, and now it has happened. It’s still surreal that I am on this team, seeing as there are so many talented bladers all of the world. So I am very appreciative of what I have.

So, what do you do at the Apple store? Are there any crazy shoppers out there, waiting in line for iPads and shit?

I do inventory at the Apple Store, and it’s a tough yet fun job. As for the “crazy” shoppers, they are there even when it isn’t the “rush.” Every year it’s something new that everyone wants, so I’ve gotten used to people acting in stupid ways over a piece of gadgetry.

Ha ha, that’s why I use a phone until it breaks or I get the free upgrade. (Ed’s Note: Ben now has a Blackberry. Email him.) Alright, it’s getting late. You’ve been skating for quite a while, what would you tell someone just getting into the sport?

For kids or anyone getting into blading my only advice is to be yourself, stretch… a lot, let your injuries heal, and have fun. It’s not about if you get paid or get skates, clothes, or whatnot, it’s about having fun, enjoying yourself and going on unforgettable adventures with your friends.

The Truespin On “Alley-Oop” History

Touring with the Ratz