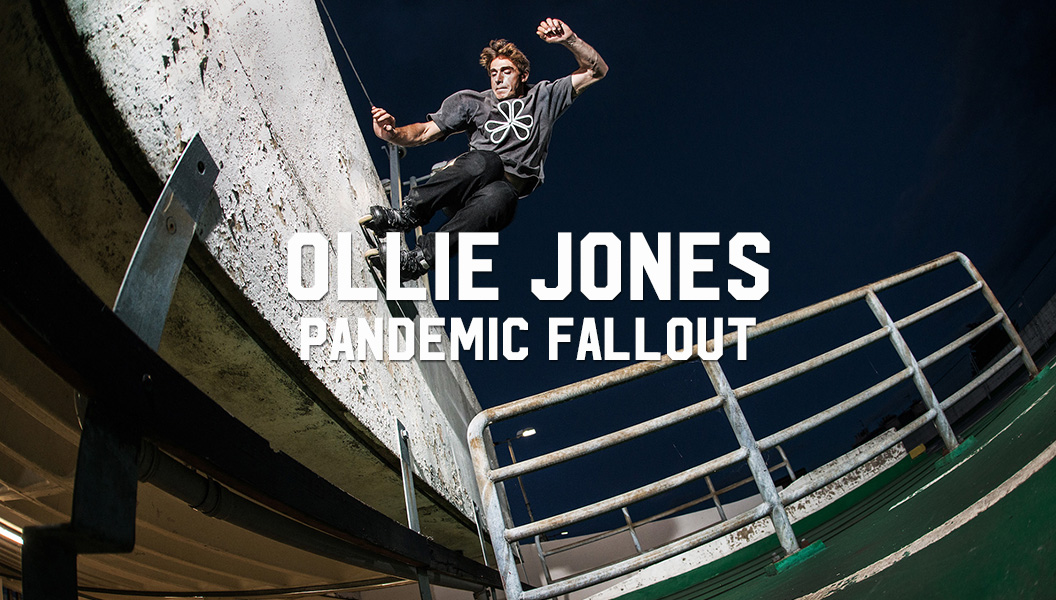 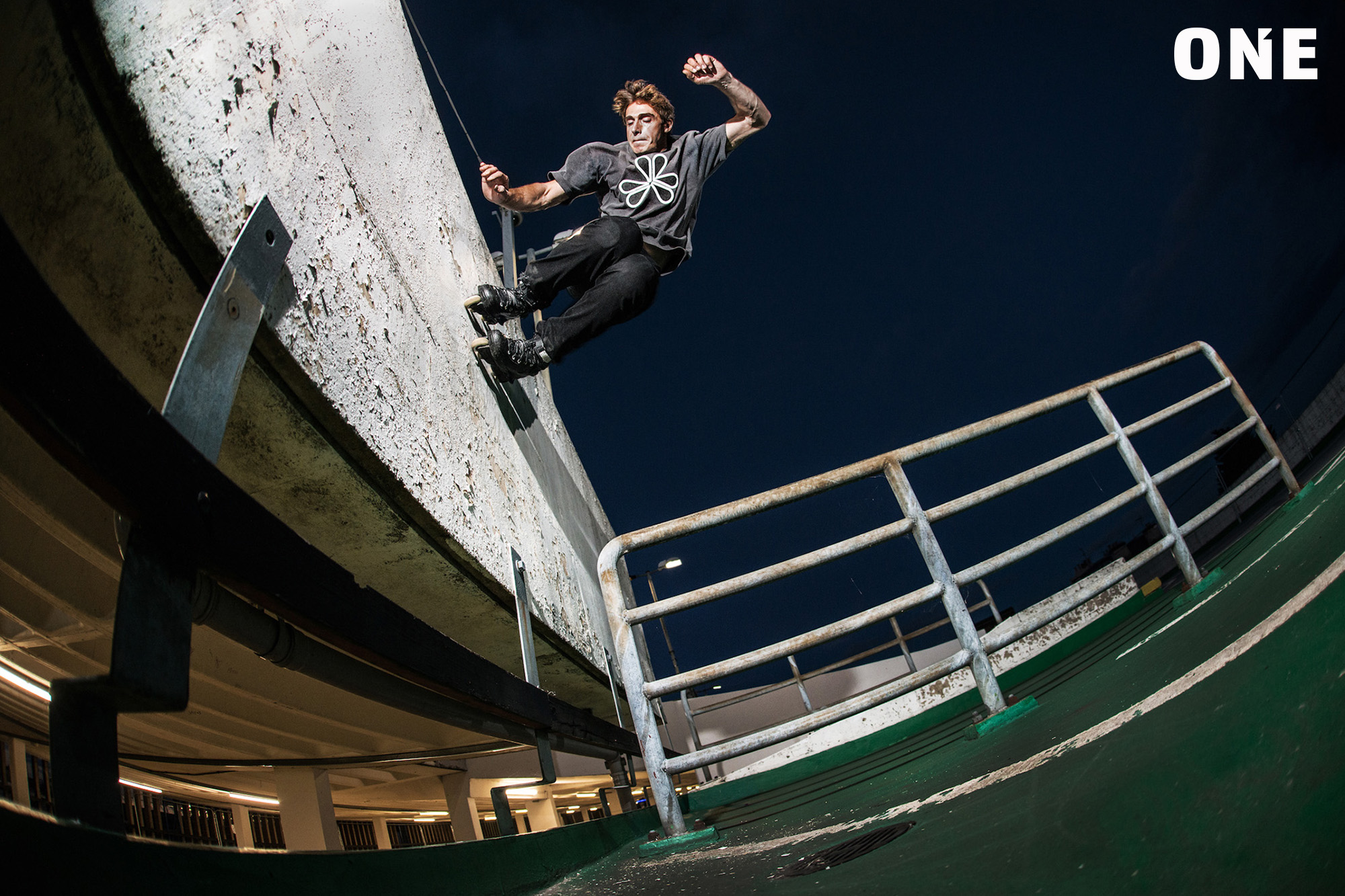 The global pandemic we are all still enduring is obviously, by its very nature, one of those rare things in life that managed to impact every single human on planet earth. For many, it brought hardship and pain. Lives were lost, financial and job security diminished, with mental health degrading to new and wider spread lows. It wasn’t all doom and gloom though, this was a chance in a very unique situation to reset, restart, or simply peace out from the rat race that life can inevitably be.

I wouldn’t say Ollie Jones fitted in either of those molds exactly, as he has always lived his life on the fringes of society, turning down the usually adopted paths and structures that guide most in his own search of health, fitness, and, of course, rollerblading. It is here where I feel if any impact was felt, it was in his rollerblading. Funnily enough though, the imposed social restrictions actually served to help release Ollie’s skating from any restrictions in some kind of bizarre mirror effect. But how did this all occur?

Hey Ollie, how are you doing man?
Hello there again, I’m doing well, thanks for asking. 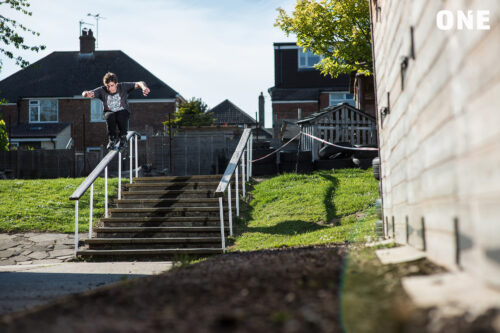 It’s been a few years since we last spoke, with one major event occurring in the meantime, so with that in mind, how do you feel the pandemic has been for you? Positive or negative? What’s been good and what’s been bad?
Well, the first major change I noticed was that I was no longer at work. The extra free time to skate seemed like a treat, but there was almost nowhere at all to go. The skateparks were all out of use, and traveling anywhere far was out of the question. Luckily, it didn’t take me long to find a rail behind a disused building, so that became my regular spot for a few weeks. It was a high-ish handicap rail that wouldn’t be everyone’s first choice, but I liked it and where it was. A few weeks into these sessions I hurt my knee on it and couldn’t skate at all for a while. Once I was back in the game the rules weren’t quite as strict so we were able to meet up in small groups again, and go to some different places. Overall, I would say lockdown blading was better for me than being at work not skating. 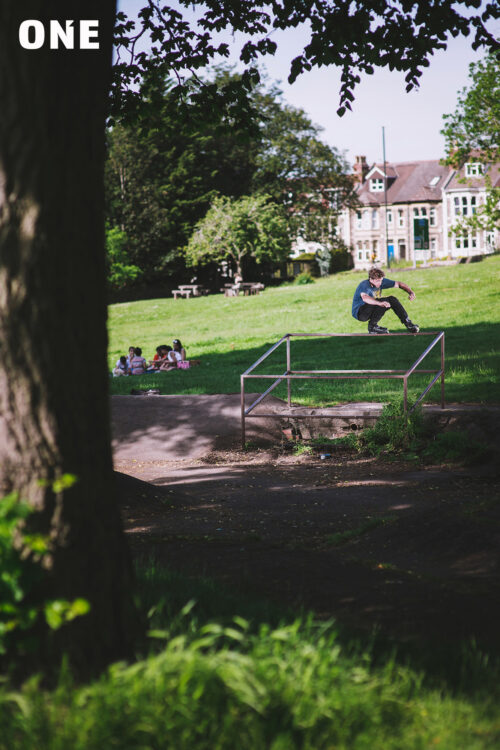 Do you think it has affected your skill set, or have you maintained some level of training during the lockdowns?
I think it’s been largely beneficial. I always work to maintain the tricks I do regularly anyway, and this situation hasn’t got in the way of that, but being stuck in one town for a while forces you to consider different options for spots so I may have learned some new skills through that. During the lockdowns I was forced to skate the same small skate park about nine thousand times, and eventually I began learning all kinds of new tricks to keep it interesting.

Traditionally speaking, you are known for being a pedigree rail skater, although you mentioned that this situation forced you to consider different options. So, have you found this last year has broadened your horizons, or are you simply still a rail rat?
I think it has definitely broadened my horizons; it was inevitable with so many travel restrictions and living in a fairly small city. There just weren’t enough stair rails in Cheltenham to fill all that free time I had to skate in now, and I felt the extra time gave me the freedom to play around with different spots and ways of blading. So that is good, obviously, but ask me what I want to go and skate on any given day though and top of my list will be handrails.

Has it effected how you and lads approach a day out skating? Business as usual, or did it make you reevaluate how you went about organizing and implementing days out skating?
Our days were definitely a lot different in the early part of lockdowns. We could only go out in a group of two, or maybe three, and just stay close to home. Given that we have all skated our hometown to death over the years anyway, it was initially very difficult to come up with stuff to do. Instead of driving to a list of pre planned spots, we found ourselves either skating or cycling around town and skating whatever we could find. A couple of times we decided that we were going to skate and film whatever was down the next road or round the next corner, regardless of how terrible it was. So it has been a lot of fun to re-evaluate things and see just how much we could actually find to do in a small area. 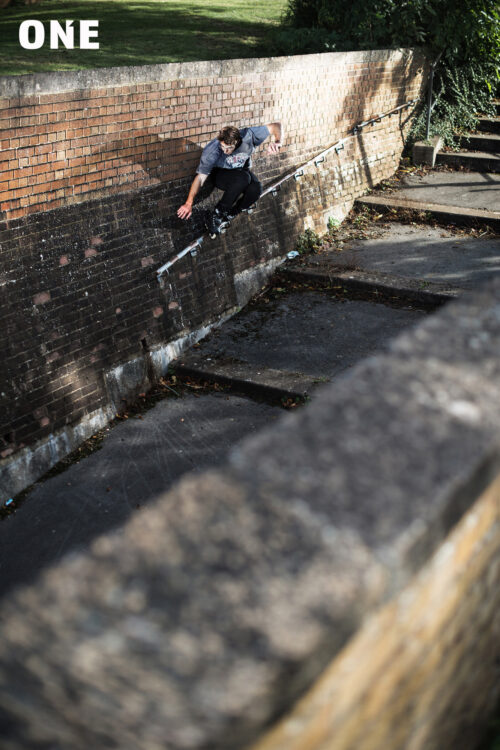 It feels like it’s been quite some time since we have seen a full section from you with the likes of Worner or Trebble at the helm, but at the same time the weekly edits on Insta have been coming thick and fast. Has this all been a result of the pandemic and having to adapt to the restrictions, or have other factors come into play making this a current reality?
I would have to say that it’s been a mixture of the pandemic getting in the way and everyone being so spread out. These combining factors have made filming for a large project very difficult. It’s also come at a time where video quality on smart phones has in reality become so good that there is no excuse for not using them. It just makes sense to use the easy-to-use technology while the real videographers are nowhere to be found.

Obviously a national lockdown will get in the way of most travel plans you might have had; but how has it particularly affected you and your skating plans during this period of time?
2019 was a really good year traveling for me, I managed to get to plenty of events and also on other trips abroad to see friends and just skate. The plan for 2020 was to keep that up, but as it stands I haven’t been anywhere abroad since Winterclash now. Maybe soon it will be possible again, and hopefully not too complicated with the pandemic/Brexit double whammy that we are having to endure as Brits. 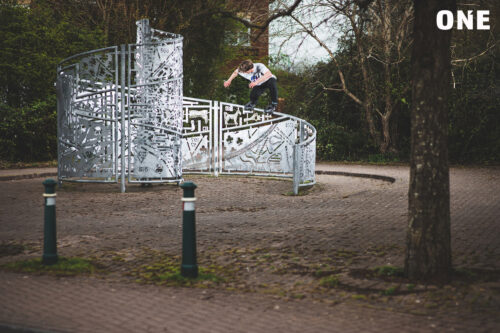 Once the borders do open up and we can begin to freely travel both nationally and international, what events and trips are you looking at?
NL contest in Strasbourg and the Prague street contest will be top of the list for me.

It doesn’t seem all that long ago that you were announced as a BHC pro rider. What’s going on with that? Is there to be a pro wheel and an introduction edit in the works?
We filmed a lot of clips for an introduction edit. Then I got different skates and we decided to start again. I am trying to make another edit with the existing clips but skating is way more fun than editing. As for the pro wheel, nothing is in the pipeline for the time being. Who knows though, maybe some day in the future. 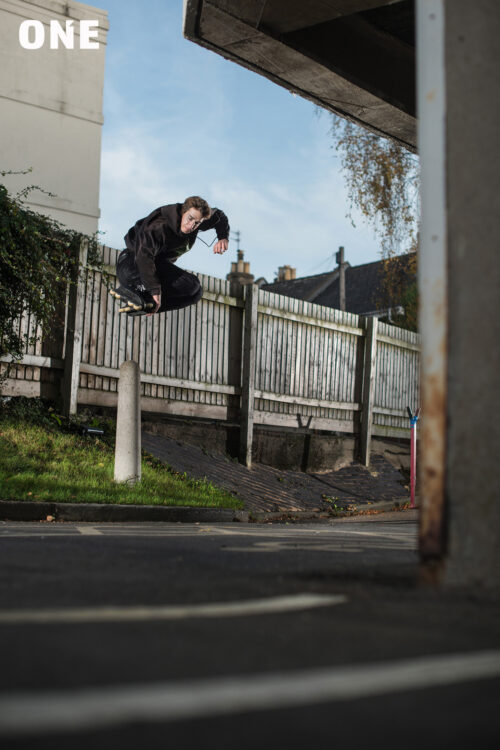 Right, thanks. The change in skates is quite a big deal, since you have been skating Remz forever, but along with yourself, it seems that over the last twelve months a deluge of Remz team riders have left or at least stopped riding the skates. What’s the story there?
My story is just that I needed new skates and there weren’t any to have. I have always liked the skates and I felt I was lucky to get to ride for a company whose skates I would have chosen to skate anyway. When I needed new skates last year I decided to try something new, as it seemed like an ideal opportunity seeing as I was only skating locally and largely on my own. Originally, I used Remz cuffs and liners with the Aeons to make them seem a bit more normal to me. I have put the proper cuffs back on now and I am really enjoying the skates. I didn’t think I would skate the flat setup, but I tried it out and just haven’t looked back since.

What does that mean for the relationship between you and the brand? Is it over or have the Aeons simply bridged the gap while Remz haven’t had product for you to skate? And is Remz even alive?
It looks like they have a new skate out that looks really nice. I actually thought the last ones I had were the best and most durable in a while. I haven’t had any contact with them in some time so I doubt I’ll be getting the new skates, but I hope they do well with the new release. 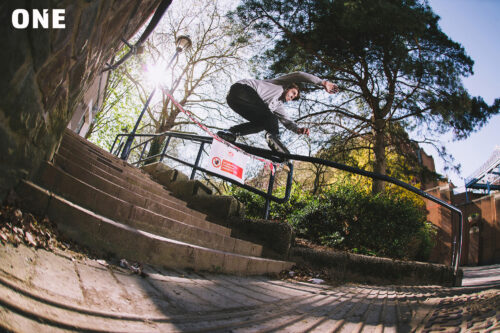 What are your hopes for the future now that collectively the world seems to be getting more of a handle of the virus ,and what will you take from this period into more normal times?
For me these are the normal times now, so I’m happy to carry on as is. As someone who doesn’t drink or go to town for things like the cinema or nights out, the relaxation of the restrictions that’s coming holds nothing for me. I already can travel where I want, and I can spend time with groups of my friends skating. International travel is another thing though, I’d like to be able to travel abroad soon. We shall have to see how that goes.

Well, thanks a lot for your time, Ollie. Best of luck in the new year!

Photos and Words by Sam Cooper