All “teh pantz” jokes aside, the athletic sweats and basketball shorts were never entirely about fashion, they represented the style of skating popular at that time. For many skaters, Broskow included, it was all hammers and handrails (for the record though Broskow has never stopped dropping hammers). Somewhere around the time AB started skating for Roces and eventually transitioned to Valo, his tricks began exploring new areas, and the way he laced tricks became less angry-stomp and more 😎. Some people loved it, some people hated it. The two styles have basically merged over the years, but it was a very interesting time to wait and see what he would do next, and still a very interesting era to look back on.

Look back on some amazing photos of this era from Broskow’s interview in ONE print issue #2
oneblademag.com/spotlight/broskow-interview-2006 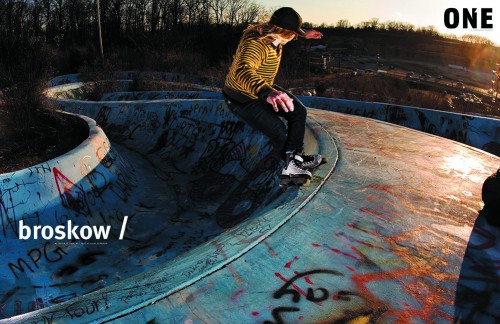