What the hell happens in Prometheus?

Prometheus finally opened and we got to see it. A total visual feast. And it deals with some lofty subject matter. But ultimately a lot of folks are disappointed because for an Alien prequel it opens up new questions more readily than it answers them. Like many, I’ve seen the film but haven’t been able to turn my brain off — the plot just keeps spinning around in my gray matter. Here’s what I’ve come up with: 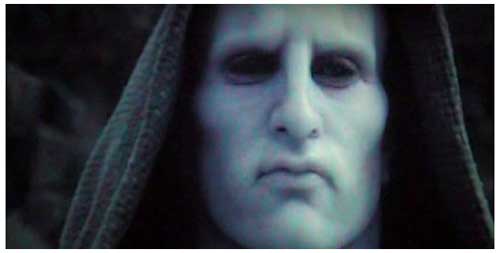 Engineer — The albino Engineer on Earth* is the namesake Prometheus. As we quickly see, he drinks something then disintegrates, and as the title sequence plays we see which fire he “stole from the gods” — single cell life and DNA. Was he supposed to seed life here? Was he a rogue element working on his own agenda? Don’t expect the movie to explain. Which is why this post exists.

Cave paintings — they don’t show “where to go,” they depict the Engineers showing to humans where they (the Engineers) came from. They are saying “We come from the stars and are way more significant than you.” Maybe even, “We made you.”

From this it seems that the Engineers come to Earth throughout the development of civilization to shepherd us along (or to use as slaves — who knows). The cave paintings are all from dominant though defunct civilizations: Mayans, Egyptians, Apache, etc. So we can surmise that these civilizations advanced as they did because of assistance from these Enginners. Perhaps they not only gave us life (via DNA) but also directed our evolution. (Or as I said, maybe they just exploited our resources and manpower.)

But, as history has proved, each of these civilizations faltered. Why? Because the Engineers left, or did the Engineers clean up their mess when a mission was completed or when the subjects got unruly? Surely there is some sort of tie-in.

An active imagination could guess that maybe the Xenomorphs (the aliens from Alien for the uninitiated) have been to Earth before to clean up societies that overstayed their welcome. 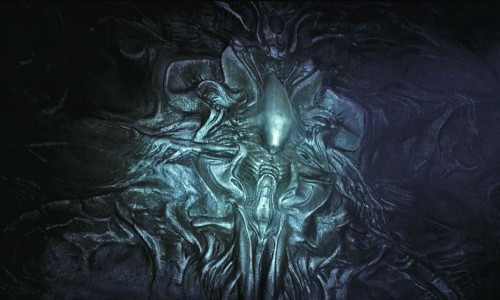 Engineer Murals — Earth isn’t the only place where important information is encoded on to walls. On moon LV-223 the scientists find murals depicting the famed Xenomorphs. These images seem to explain the creature’s life cycle. It also seems that these critters wiped out all life (‘cept one) on the planet. According to the movie, this seemed to happen 2,000 years ago.

Due to some dialogue in the movie (a clever red herring?) and some of the general mythos of the Alien universe, most folks believe the Xeno to be a biological weapon. Maybe it is — it sure does a great job of reproducing and surviving. In line with my little theory from above, if the Engineers did help the Mayans with tech, once the gold was mined or whatever, maybe they dropped an egg or two on the temples and let the Xenos mow down the humans. Maybe this was done over and over again to terraform the planet and push evolution along. Just keep it in the back of your head.

But I don’t think it is a biological weapon. I think the Xeno is something the Engineers worship. In fact, someone on the internet floated the idea that the Engineers work for the Xenos. That the whole point of having Engineers or humans is so that the aliens have a host body for reproduction. The Engineers do exactly what their name implies: they engineer. They make shit. They fly shit. They do what someone else tells them to. The Engineers can’t reproduce — no females — so they worship this creature that is as evolutionarily perfect as a Great White shark. A perfect killing AND reproducing machine.

Okay, sure, that’s farfetched, but maybe it’s only slightly different. Maybe it’s not worship, maybe it’s fear and deifying. Maybe the Xenos overran the Engineers and enslaved them. They force them to tend to them… or feel their wrath. Or… 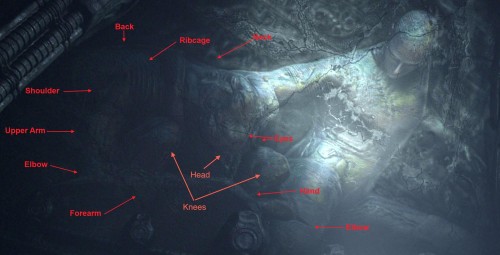 Go back to the first thing we talked about, and the movie’s title: Prometheus. He stole fire from the gods, and was forced to have his liver pecked our for all perpetuity by an Eagle as punishment. Are the Xeno’s that Eagle? Has the Engineer race been forced into slavery by the Xenos to pay for the mistakes of their ancestors? Or maybe the Xenos (and the black goo) are specifically for Earth, to clean us out, to erase the mistake Prometheus made in giving us the gift of life. I dunno, but I like it.

Bottom line: The Xenos have been around for a very long time. They are not new, and they don’t seem to be an accident. Remember, the alien in Alien is very old.

I wrote a short story nearly a hundred years ago that deals with many of these issues. But unlike many of my parables, I chose to write this little story in such a way as to resist singular interpretations in favor of a broader, multi-faceted plurality of texts, truths, and meaning.

I went to see Prometheus based on a recommendation from a homie and this JE article. I thought it was a great movie but felt equally frustrated with some of the unexplained plot devices. The black goo, for instnace, WTF.

The other thing I can’t help but keep thinking about is how “scaled to ourselves” the presented fears are. Personally, if there are malevolent “gods” or “aliens” out there, I expect our lives (and/or deaths) to be completely incidental to them–like the way we kill zillions of microbe every time we wash our hands.

They’d probably kill us without even noticing. My point is, I’m doubtful that they have specially evolved penis-shaped tenticles that are designed in line with our cultural (specially masculine/homophobic) fears to kill us by plunging cock-snakes down our throats (notice, for instance, that only MEN died that way in the movie).

Otherwise, I thought it was a great flick with a lot to offer. The duller among us will be excited by the neat tech and the explosions, the cleverer among us will be fascinated by questions about humanity, the nature of our origins, and our place in the universe. Others will be able to add one more good lead protagonist to the dreadfully short list of great female characters being portrayed in film these days.

Also, @Kafka you rule. H.R. Giger, on the other hand, still strikes me as a big friggin’ weirdo.

I have been following this film in it’s trailers. I love the power it has engineered. Beings as homosapiens that have been are basically a parallel to the program of the Prometheus. This is what it is phenomenal. The basic element of parallel vision is the degree of abstraction you can take from it, or rather a logical likeness to your own life. This is how I have seen the movie. It is good that Hollywood has been expanding the origins of imaginations to the table. I can sense that this will grow as beings of time challenge the expression of religious films, rather intelligent motions without static, without fear of creation.