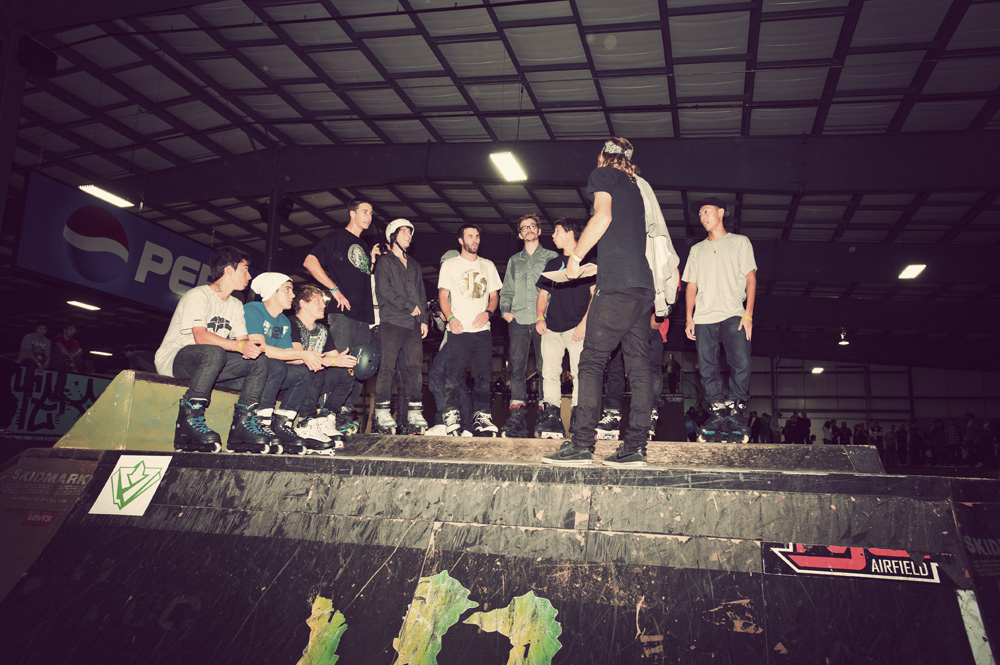 On Saturday, November 5th, I rushed out of my house to meet up with Print Brigade co-owner Chris Piascik after sleeping through my alarm and waking up when we had planned to be on the road. We packed up our shirts and began the three-hour drive from Connecticut to Rye, New Hampshire for the 2010 WRS Finals. I sat in the car thinking my rough start was surely a sign of things to come and tried to prepare myself for a very long day. Thanks to Chris’s lead foot we managed to make great time and arrived just minutes before ONE photographer Drew Amato and the rest of the CT crew.

It’s no easy task trying to cover one of the largest rollerblading events in the world from behind a table trying to represent two different companies. As much as I would have loved to watch everyone tear up the newly built obstacles at Rye Airfield, I had to listen for the names announced of the skaters I’ve never seen skate in person, or just can’t get enough of, to focus on during Blade Invasion competition. Thankfully, I was not alone and managed to make it work by running back and forth between the park and our table throughout the day. Memorable moments of the Blade Invasion included Gavin Drumm’s cess slide up and down a ramp you couldn’t pay me to go down, Matt Luda’s topsoul on top of an octagon shaped satellite dish, Miguel Ramos’s monkey plant palm slide 540, and Wake Schepman competing with a broken wrist.

When the Finals were starting I was eager to close up shop and get a spot to watch the show. What can I really say about watching the top ranked competition skaters compete for the title of World Champion? The level of skating was as absurd as expected, if you haven’t already seen the edits I highly recommend doing a search after finishing up here. At end of the day, Haffey flew away with the win thanks to some of the highest airs I’ve ever witnessed. As I watched him jumping from the rails on the back of the deck to get more speed when dropping in, I wondered if the launch ramps seemed tiny to him. Whatever the case may be, he has certainly figured out a way to launch higher than anyone else there. CJ Wellsmore earned enough points to take the title of WRS World Champion. I spoke with CJ moments before the finals began and was under the impression that he was out of commission with a back injury. He certainly proved me wrong and finished the day skating like the powerhouse that he is.

It turns out my day couldn’t have gone any smoother; it seemed to be a general consensus for the competition and people involved as well. A lot of hard work and planning by the all the individuals responsible for creating a great day of rollerblading are to thank—especially the skaters, spectators, organizers and sponsors who made this event possible. Special thanks to Matt Mickey for keeping us entertained on the mic throughout the day, and for offering up his prime real estate of a table upon our arrival. Thank you to Rye Airfield and its accommodating staff and facility, especially their delicious $3 meatball subs, and to Create Originals for busting their asses the entire week prior building the additions that raised the possibilities of skating to the next level. And of course thank you to Daniel Kinney for the countless hours of hard work required in organizing yet another successful major rollerblading event. — Jamie Murrett

Amazing shots Drew… I don’t know how you do it with so much chaos going on! Keep kickin’ ass