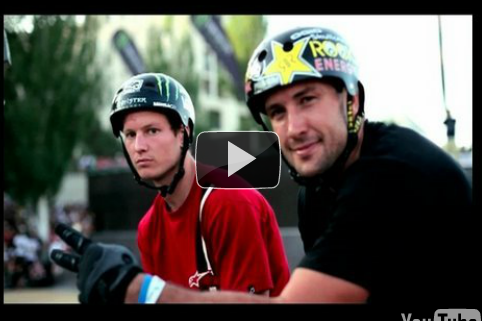 If the X-Games was European, badass, and actually represented the action sports community, it would be called FISE (Festival International Sports Extreme). Recently, the FISE World Finals were held in Montpellier, France, from May 12–16th. Thousands of fans and athletes from every corner of the action sports world descended on the city like moths to flame. The obstacles provided for every sport, from wakeboarding to BMX to freestyle motocross, were unreal, and as far as rollerblading went, peep the edits, watch the crowd, listen to their cheers, gauge their reactions, and imagine this many people crammed into Modern Skatepark or, better yet, just imagine The Bitter Cold Showdown on this scale in general.

The FISE event takes place over the span of four days and despite its size, the whole vibe of the entire competition is extremely positive and is one of the biggest contests of its kind. Pretty fucking gnar. This year, the results of the rollerblading finals are as follows:

Though just skating around the course, his steez is reminiscent of a confused or drugged lumberjack, even after taking a huge spill and falling completely off the course, the Frenchman, Romain Godenaire, laced enough gnarly tricks to convince the judges that he deserved the number one spot. Thankfully, after taking 10th place, Stephane Alfano wasn’t on his period and nobody got burned by any cigarettes. The entire slew of international skaters represented their countries and companies to the fullest. Shredding the course with ease, skaters like Wellsmore, Stockwell, Aragon and Haffey held their own against European power-houses Roman Abrate and Dominik Wagner.

ROLL’s Magazine might not understand the correct usage of the apostrophe, but they sure as hell know how to put banners under a rail and convince dudes to throw themselves down a steep set of stairs, land on some plywood, and then call it a street comp. Euro Juice was flowin’ like it was IMYTA Amsterdam… People were pressing against each other with a raging fervor to see what was happening. Looked dangerous. Props to all the rippers that took the plunge.

Events such as FISE are exactly what rollerblading needs. I remember when the Gravity Games came to my hometown, it was still a big deal, but people really only came to see guys like Tony Hawk or Dave Mirra. Then, once the rollerblading events finally got underway, douche bags like Jaren Grob (Ed’s note: The Monster is okay in our book.) would hit the course, throw up the metal fingers, and condemn the rest of us to a future of ridicule. But at FISE (and Movistar coming up in Barcelona), we are able to showcase how amazing our sport is with arguably the best skaters from all over the world. Since the mainstream media and audiences outside of our industry don’t normally have access to all of our videos, edits magazines, etc., for them to see skating at this level, it can only mean positive things. Think about it. Does rollerblading have a Shawn White or a Ryan Scheckler (thankfully no in reference to the latter, “If I can 360 bluntslide in front of thousands of screaming fans, why can’t I get over my parent’s divorce?” Because you’re a turd, Sheckler, now go fuck yourself!)? Anyway, what we lack is a face to associate with the sport. An icon to bring it into the spotlight? Who knows what the future has in store for us, Wake Shepman’s balls haven’t dropped yet, Henry Hubbard is probably in some back-alley selling meth, and Roadhouse has gone fishin’. So we might be fucked in terms of young blade-prodigies and their welcoming smiles, however, as far as contests go, the FISE Festival does what the X-Games or Gravity Games never hoped to do for the action sports community—unite and inspire.

Now, as they say, on to the next one…

The Chaz Sands Invitational is quickly becoming one of rollerblading’s most celebrated contests. From May 6–7, Rampworx Skatepark in Liverpool, UK played host to the contest for the second year in a row. Aussie sensation CJ Wellsmore may have taken home the grand prize, but Broskow’s “best trick” had Bambrick chasing his heels for over a half hour.

No, but seriously, just from the online edits alone, one can see how much time, effort and dedication Chaz puts into this event. I remember the first time I ever heard the name Chaz Sands. I must have been about 13 or 14. Salomon ran a back cover ad in a Daily Bread issue, and Chaz was the skater featured. I remember thinking to myself how bogus the ad was, and kind of dismissed Sandz because I thought the trick looked horrible. I remember thinking, “he won’t be around in a couple of years.” I must have been high on PCP, or maybe I was still just an uninformed grom, because clearly he has made a name for himself in rollerblading and is like “a teen-aged Chuck Norris level” of badass. He is also one of my favorite skaters to watch. Anyway, flash forward 7 years and look where he is today. Not only did Chaz skate hard enough to place 2nd in this years event, he also managed to get some big time sponsors like Renault and Nissan Liverpool. Not companies you would typically see on a list of presenting sponsors for a rollerblading event. Yes, definitely some next-level ish. As you can see from the results above, some decent prize money was handed out to the winners, and over 150 skaters from 19 different countries competed in this year’s event. Post-comp, an uncertain amount of spectators and competitors alike partied like the world was going to end. (Thankfully it didn’t.)

After joining the WRS last year, The Chaz Sands Invitational is the only 5 star event in the UK, and competitors can gain points toward their overall WRS ranking. When you have some of, if not ALL OF bladings biggest names under one roof, hammers are bound to be dropped, thus, points awarded, and another element that sets Chaz’s event apart is that it also features a girls comp. This year, Japan’s Chichiro Azuma took home first place and put a little weight in her purse, about £600 worth. Competitors like Coco Sanchez, Jenna Downing and Manon Derrien got down on the course and showed the spectators (and any detractors) that blading isn’t just for dudes who look like girls.

So there you have it, a quick look at two different international events that just went down. One is a mega, multi-sport powerhouse, and the other is a blader-backed upstart worth 5 stars on the pro circuit. And there’s more happening (NL) and coming (Movistar Barcelona Extreme), and all I can say is the more exposure of the right people the merrier. Hell, Brian Aragon just won Asian X-Games and Jeff Stockwell was second. These events bring together hundreds of people all for the sake of a shared love, a shared passion and tie it into one grand experience. I can guarantee when Aragon and Godenaire or Wellsmore were flying through the air in Montpellier they weren’t called fruitbooters, or met on the ground by skepticism or jeers. Their efforts and tricks brought forth a roaring applause and a lingering for more… Until then! — Ben Karris

While I was writing this, I was watching an insane amount of edits. I was also checking out all of this stuff about The Nitro Circus and his name must have slipped up..

aka I effed up!

this post is epic. great read. great clips too