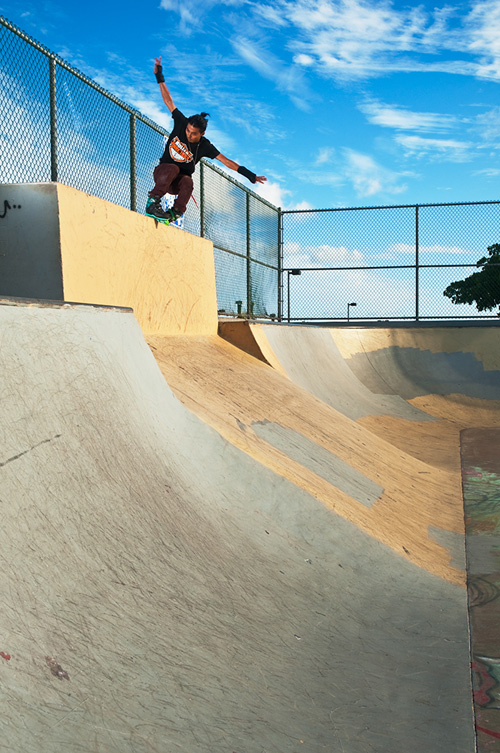 Over the past year I’ve had the opportunity to roll amongst the community of Hawaiian rollers. Coming from the west coast, I had been spoiled, one might say, with the frequency of skater organized events and numerous rollerblade crews. Oahu had a stronger rolling scene than I had expected. From any given point on the island you were no more than 20 minutes from a decent skate park. Catching up with Akari Ihara on the drive home was an occasional treat. You may have seen this guy on the cover of the Rollerwarehouse catalog about a year back, Liu Kang air with the green frames. Akari is essentially the backbone of the Oahu rolling scene. Throwing the annual Hawaii Real Street Contest every summer on the streets of Oahu, and staying consistent with the weekly Sunday skate sessions are a few of the contributions he makes to the island rolling experience. As he was soaring through Manana skate park one afternoon, we had a mellow photo shoot. After gapping quarter-to-quarter over the 12-foot plus channel, Akari came at the sub-box from the other direction and threw down a tourqued top soul. That was the trick that made the shot, and we called it a session. Shot with Nikon D300, 18-70mm Nikkor at 29mm. f/7.1 @ 1/250 ISO 100. Nikon SB-800 at 45º camera left.