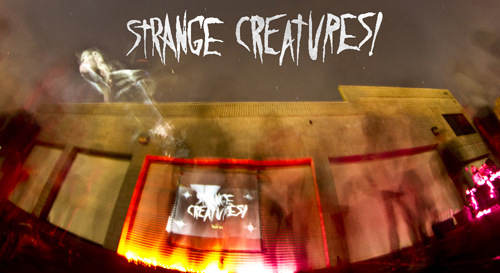 “Strange Creatures” is a new blade video by Amir Amadi featuring the best up and comers from California as well as a select few guests. The premiere was held this weekend at Amir’s auto shop in San Clemente. The event drew a great crowd of support from not only all of California, but also Phoenix, touring friends from Chicago, and representatives of Valo, Rat-Tail, Revolution, Vibralux, and SDSF who all proudly endorse the flick.

Upon arriving, you could have found Amir running around setting up the projector and sound system, or the decorations that enforced an atmosphere consistent with that of his video. Next to the table of hand-printed and hand-dyed “Strange Creatures” t-shirts you could grab a cold one from a bucket of assorted Pepsi products and severed limbs. A stack of skulls and halloween lights framed the projection screen — a sheet duct taped to side of the building.

After some meet-and-greet time, the projector flicked on and the crowd took their seats in the parking lot. As the intro played there was excessive clapping, cheering, and patting of backs for everyone featured. This continued for every succeeding section, and really made you appreciate what we are a part of. Recognizing that we have such a tight-knit community based on a love of something so obscure makes me more proud and excited about rollerblading than probably any video ever could, but “Strange Creatures” did a pretty excellent job of capturing that.

Not only is there the fast-paced turboblading of Keith and Adam Brierley, but you also get swag-shredding from Matt Luda and Alex Broskow, and very pleasing premiere sections from Matt Langel and Dean Coward.

Now, the skating speaks for itself, but what is extra special about this video is the style. Very rarely do “themed” videos meet their mark, but Amir Amadi really pulled-off what he was aiming for in “Strange Creatures.” The gritty/grungy effects and transitions, carefully selected music, b-roll, and skaters and their personalities, create a creepy, comical, vintage vibe that accentuates the skating, rather than so commonly distracting from or masking it.

Creative, driven, and talented bladers coupled with the same kind of director make for a very stimulating end product. “Strange Creatures” showcases not only talent but also a growing movement about the blading mentality. I’m glad to have been a part of this experience, and eagerly anticipate what this group has in store for the future. — Kris Troyer

can’t wait to see this. imma mos def pick up a copy, it’s gonna be classic !