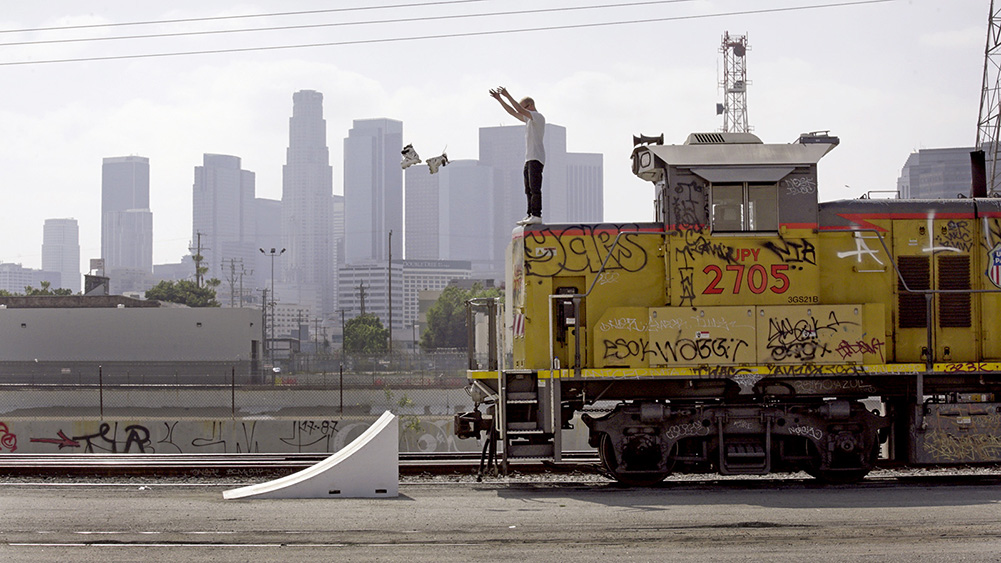 When Sven Boekhorst retired from competitive blading in 2013, it seemed his career would follow the trajectory of countless blade legends before him — slow dip into obscurity. But that’s hardly been the case. In 2012 Sven and his crew released the first Cityhopper project, Cityhopper NL. Sven took his launch ramp all around the Netherlands and inserted blading into public spaces all across his homeland. This was followed with Cityhopper Europe, which expanded the playground and found new potential for Sven and his ramp. Which brings us to 2015 and the release of Cityhopper World — the third installment in this globe-trotting trilogy that sees the Rollerblade pro spreading his vision to far corners and plugging into the blade community at all turns. Releasing online November 30th, here’s an in-depth look at the Los Angeles leg of the tour. You know, the time when Sven tried to smash his head open in Hollywood. Read on to learn more… 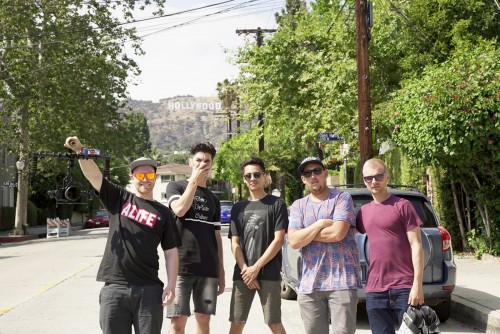 Sven hey — great work on another Cityhopper tour. It’s always inspiring to see what you and your team come up with.
Diving right into your LA bit — how did you pick the cities you visited this time around?
The idea was to look for one city on each continent, and where we decided to go had a little to do with the size of Rollerblade’s distribution in that country. Then, after that, we picked the city we where thought we would have the most support and spots for the tour. The list we finally settled on was: Cape Town, Shanghai, LA, Rio, and one more stop in Amsterdam. 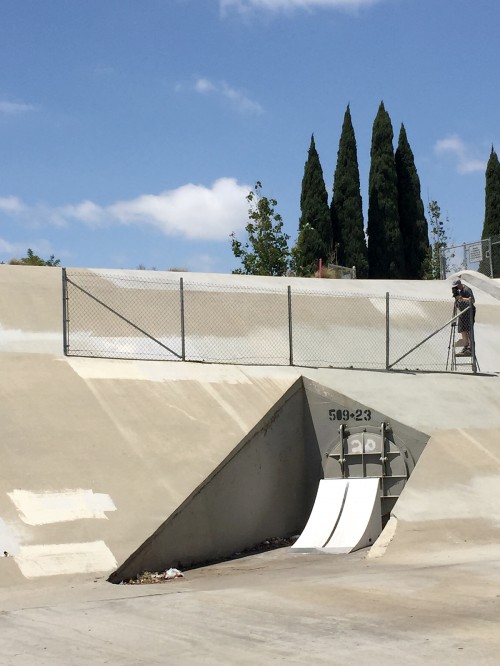 In regards to those locations, how does spot planning work? Do you know what you were coming to LA to do before you did it? Or to what degree?
We did some research online and made a list of what tourist locations we at least wanted to visit. After Cityhopper Holland and Cityhopper Europe, we knew Cityhopper World was going to be the hardest outing for sure. Same when it came to spots. We thought LA was going be one of the easiest but that’s not how it turned out — we had a lot of stress with security and police. 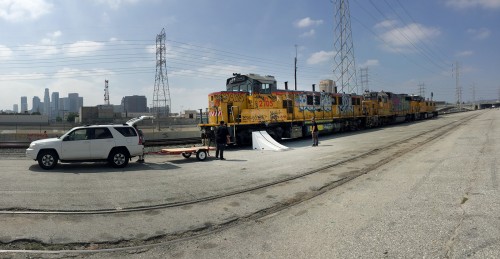 I know you teamed up with our buds Tim and Big Ern at Lux Protective as a base of operations and for the ramp build… good move. How’d that all come together?
Tom Hyser brought me in contact with those guys and they helped us out big time. At the end we made a package deal which included building the ramp, accommodation, renting a car and trailer. It made a lot of stuff easier for us so we could focus on the main tasks. 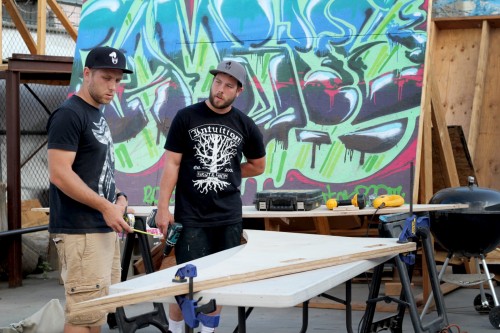 Speaking of the ramp, I was looking at the cover shot for last year’s documentary, you know — you royaling up the London kink rail… and I was thinking… why use the ramp for a trick like that? Why does every spot of the Cityhopper tour have to use the ramp?
That’s the concept of Cityhopper — to skate spots that are only skateable with this ramp. It makes you look differently at spots. Spots that aren’t normally sessionable suddenly become pretty cool. For Cityhopper World it was harder and harder looking for different kinds of locations and tricks than we’d done before. 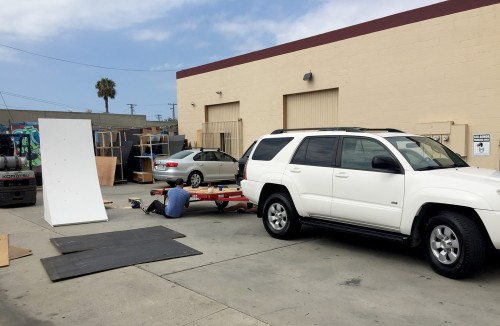 I think once I saw a photo of you saying the ramp was arriving at a location, which caught me as unusual in that it would be expensive to ship that beast all around! Do you do that, ship it around — or do you guys build a new one in each city?
Back at the beginning of these missions, I checked if we could build a Cityhopper ramp that we could travel with, but this turned out way too expensive. Then the second option was to ship the ramp to each country, but that turned out too expensive as well. So we had to make a drawing of the Cityhopper ramp and find teams in each country that were willing to build the ramp AND have a place to store the ramp before our arrival and at night when we were not using it. This worked fine for LA but in some other countries it was a bit more difficult. 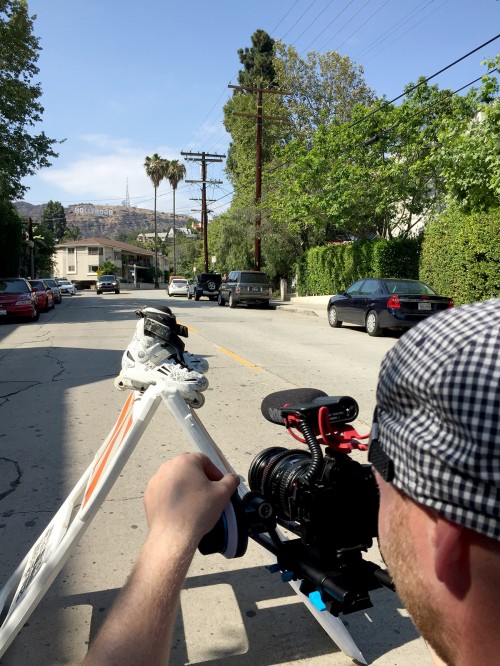 This time around you hit some exotic locales like Shanghai and Rio… Capetown I suppose too. Looking back, what was the best stop on the trip? The one where everything just worked out the most smoothly — we all know of course that wasn’t LA.
Yeah, unfortunately not LA. 🙁 We all thought LA was going to be sick with the nice skate spots you guys have, but I guess Rio for me, personally, was the best trip for a few different reasons: 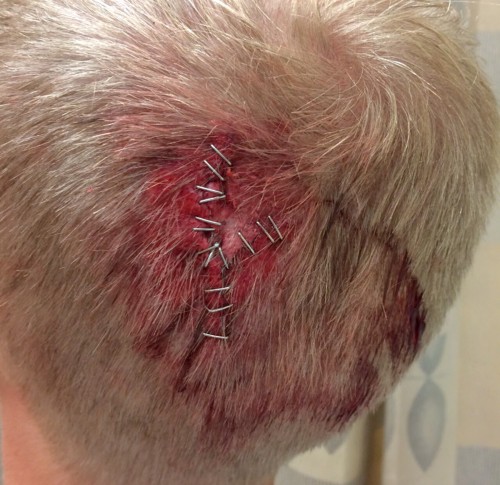 Tell us about what happened in LA and why you tried to split your head open like a watermelon. Pffff…. this was probably one of my scariest memories. I don’t think we were even in LA for 24 hours, and we’re skating the famous rails in Hollywood when I hit my head really hard. Somehow I lucked out with only 16 stitches in the back of my skull… On the way to the hospital my vision was getting blurry, which was scary. But in the end my leg was a bigger problem than the pain in my head. 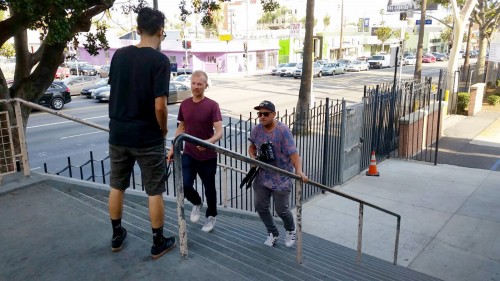 Scene of the slam

You were at those school rails, right? What were you trying to do?
A line. First, I jumped from the street to the flat rail with royale 270 out and as I approached the handrail I tried to do an inspin royale (spinning away from the 270 out) without any speed control moves so I had too much speed and missedthe stairs and rail completely. It was like a 7-8-ft. fall, and the first thing to hit the concrete was my head. 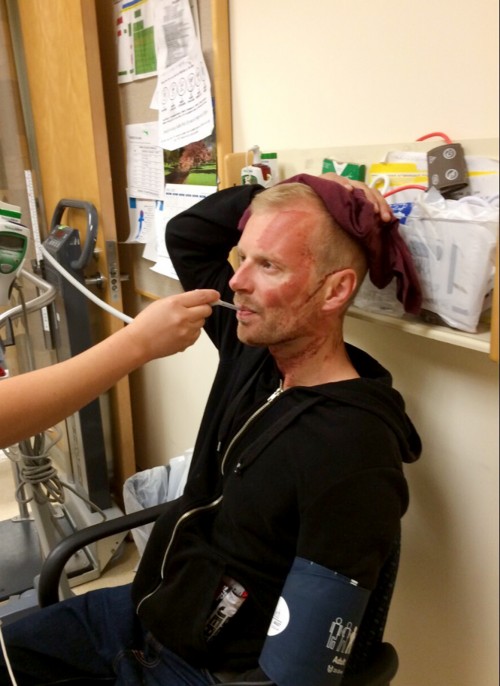 How badly did that injury disrupt the project’s schedule? Was LA a total wash? Are you okay now?
I’m doing fine now, but were not able to shoot the first couple of days. At first my head was killing me, but by the end of our trip I had more trouble with my leg which was bruised from the slam. So we decided the only way to get at least one clip done was to wait for the last day so I could be as strong as possible. For sure I wasn’t 100% but we still managed to get three pretty cool clips. Considering all the stress and how my luck had gone, we were pretty happy to get those handled. And besides that, Sean Keane also was able to get a couple clips that will be in the video. 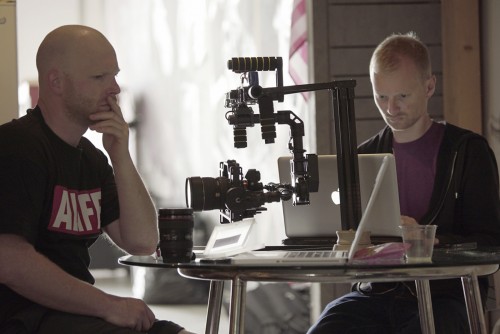 Didn’t you get out of the competition business so you didn’t have to rack yourself like that? 😉
Hahaahaaa one of the reasons, yes!!!

Three deep into these tours, what’s next? Will 2016 have another iteration of Cityhopper? May I suggest IslandHopper?
It’s funny you mention it — we were joking about the same idea: Islandhopper. Another idea is to do Cityhopper on the moon. But for now we first want to release this and see how it goes. If another tour gets underway it would be 2017 for sure. 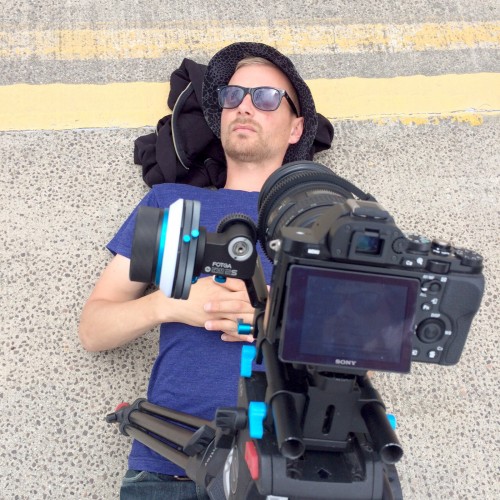 Sven in the street

Well thanks for answering our questions, Sven. And like we said earlier, congratulations to you and the team on what we’re sure will be another rad representation of blading’s possibilities. Until next time, anything else you want to throw out there?
Just want to thank the team and all the people we met during our adventures. Again, it’s really cool to be part of this great community and how we support each other. Also, of course, thanks to Rollerblade!

Posted by ONEblademag on Sunday, November 22, 2015