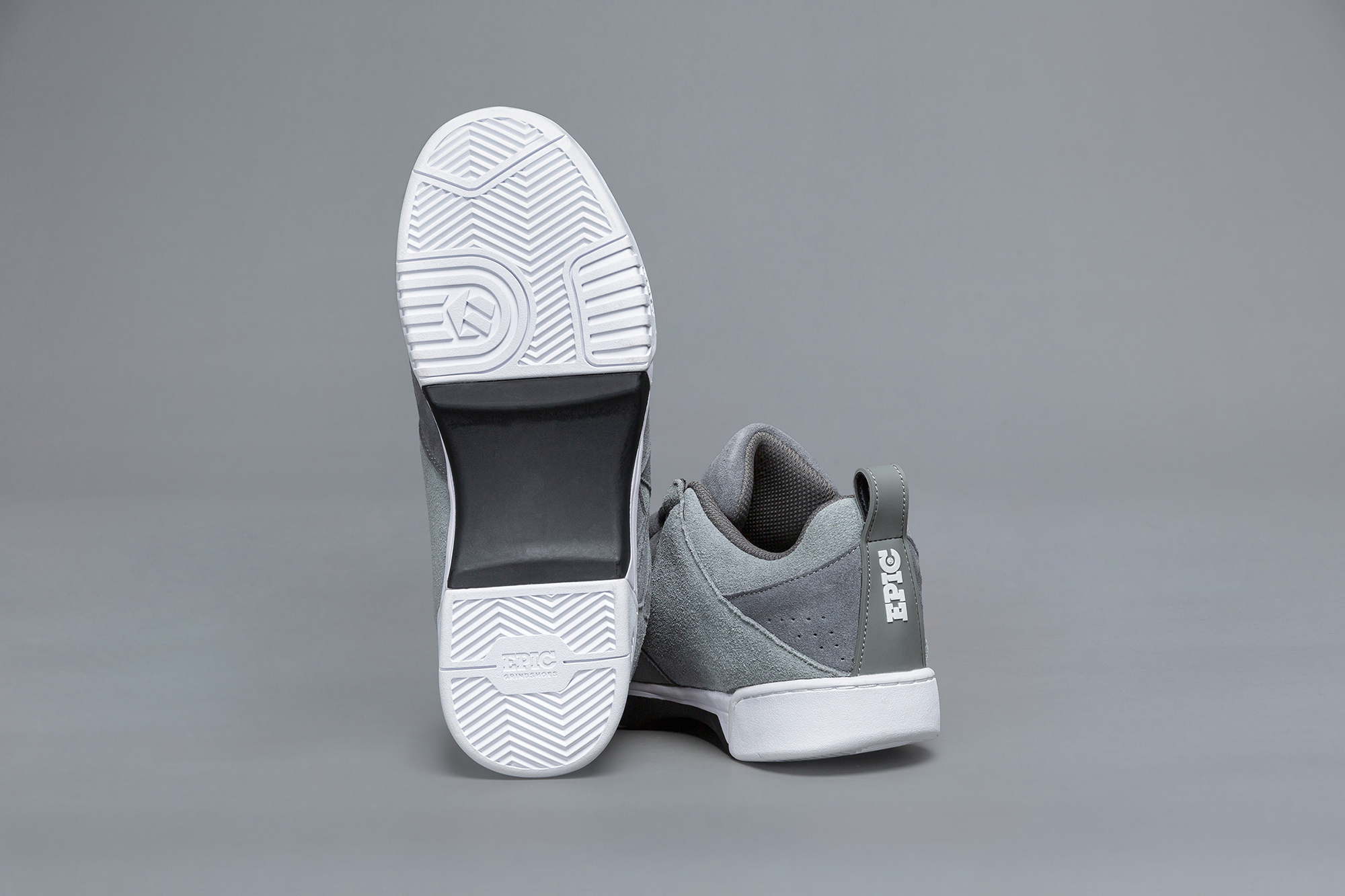 See Jack run. See Jack grind. See Jack do that without any skates… welcome back to the future of shoe grinds thanks to the brand new drop from Epic Grindshoes. Demonstrating public’s seemingly bottomless appetite for nostalgia, these slick looking kicks come in a variety of styles and have been thoroughly tested by some of the best skaters on the planet and a few parkour people too. We asked Oli Benet about how Epic came into existence and he wasted no time telling us all about it, so read on to learn everything you wanted to know about Epic but were too lazy to ask.

Oli, well congrats on another exciting partnership with Mathias and the Powerslide family. You guys have a nice track record of staying ahead of changing tastes and trends, and this looks like another instance of that. So, who had the idea to bring back grind shoes?

Thanks a lot! This one is really, really exciting for me. To trace the exact source of the idea would be quite hard, I think a few people thought about it at the same time. I had been looking on second hand websites for a few months and was building a collection, and the Enin brothers started making the “Fake” Soap revival project. I was hungering for a new project after selling my companies a couple of years earlier, and really wanted to work on something new. At the Same time, but I didn’t know, Matthias was waiting for the right time to do it as well.

What reaction did you get when the idea was presented?

It was at a Powerslide meeting that we do annually that I just blurted out in the middle of a sales meeting “All I can think about is doing grindshoes.” And Matthias was so excited by the idea because he literally had a brand-new pair of Soap shoes that he had been thinking about doing something with. Everyone in the room was really excited about it (a lot of well-known industry people, Sam Crofts, Mirek, etc) and Matthias just said “hands in the air who thinks we should do it?” Everyone put their hands up, he threw the brand-new pair of Soaps at me and said “Here you go, you wanted it so here’s your project.” I was really excited, probably just as much to get new Soap shoes as I was to start the brand, and I my brain just went on overdrive.

What has changed about the process of making a product like this — in terms of technology and actual manufacturing processes — in the 20+ years since Soap Shoes exploded on the scene?

Well, we didn’t have the Soap plans, or didn’t particularly want/need them as we wanted to make something lighter and with our own experience of how the shape and construction should be. Working from scratch to design a product is always 100 times harder than I remember, every time. Luckily Matthias knows how to do everything, and obviously you have 3D designers and experts on shoe construction and cuts. Like, I’m so lucky to have Javier Rosa as head designer; we’ve worked on a lot of things over the years and he’s absolutely brilliant. I guess most of that is similar to how it was back then. Then you have to decide on whether to make the soulplate separate or glued, try different versions… see what works. 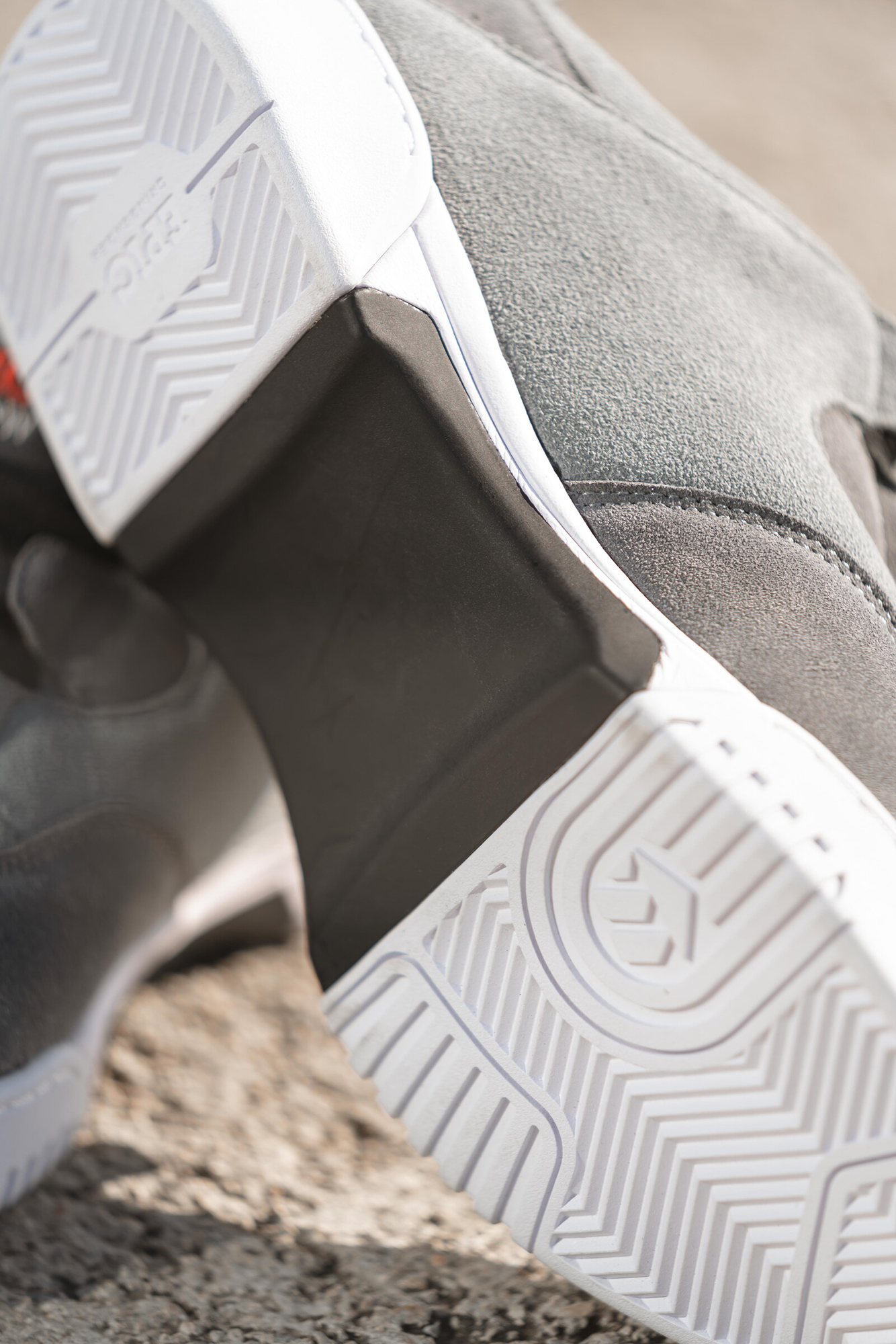 How about some tech specs stuff. What are the plates made out of, and what are the measurements? How much grindability is in each shoe?

It’s a top secret blend of Special Nylon Pa with a high percentage of Fibreglass for that butter smooth slide. Our riders have been testing samples for almost a year and I haven’t seen any worn through grindplates. It’s like a soulplate from skates… so if you’re going to be grinding ledges with no wax it’s inevitable it will eventually be worn through, but they are really tough and long lasting, and actually in some ways more controllable once you get a nice big groove.

That just made me wonder, are the plates going to have some sort of standardization similar to UFS? Are you going to release files so the 3D printing people can go wild with mods?

Anything is possible, we hadn’t really considered that, but currently the plates aren’t replaceable because replaceable plates make them heavier, more expensive and less comfortable to walk on. So not sure how that would work unless we changed the construction… 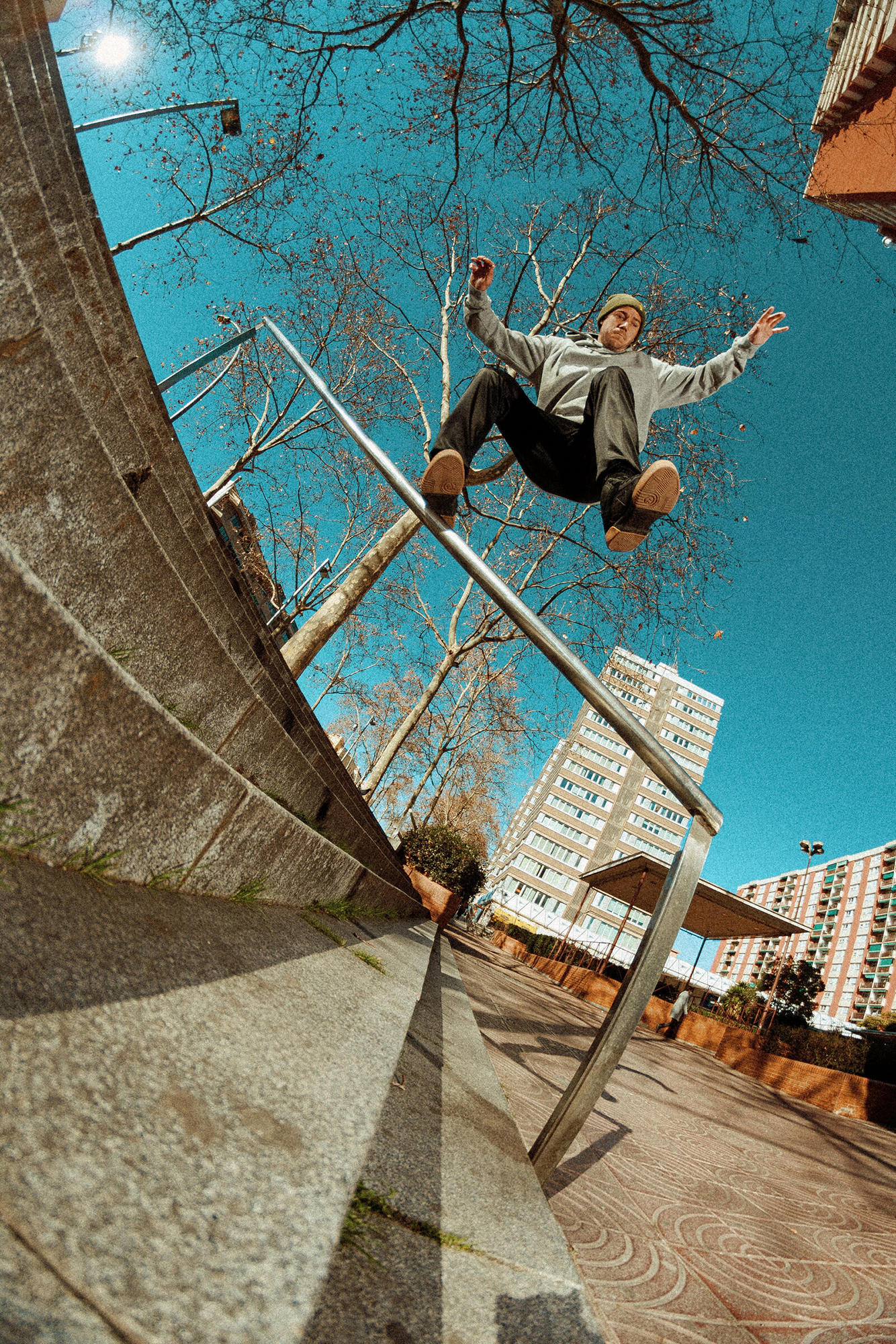 It seems like you’ve put together a team that’s spread out globally and represents different disciplines and audiences — what can you tell us about how they came together?

So there is a pattern with everything I do, and that pattern often involves me re-working with some of my favorite people, because I only want to work with people that actually love the projects. Nick Lomax and I go way back, we met on tour in 2004, and he’s amazing. We’ve spent hundreds of nights rolling around Barcelona together, and we’ve toured dozens of cities together. He’s always been the most professional rider I’ve ever worked with, and he really gets excited and involved, so I think pretty much everything I’ve ever done has had him involved in some way. The same goes with Xavi, I love his style and he’s a nice guy, so I always get him involved. Mery needs no introduction, she’s very cool and gets on well with everyone as well as being very skillful and professional, and Eugen Enin was and is the modern day king of Grindshoes, maybe the inspiration behind it all. He’s also emotionally invested in it, and really gets involved. Montre as well, he was using grindshoes a long time before the brand launched, and has so much positive energy. Sven was one of the OG’s from the Infamous “Fake” Soap Edits and blew my mind with what he was doing. Air Dolphin was an obvious choice, what a legend. Bob Reese is someone that can blade and is absolutely incredible at freerunning, we always wanted to see what freerunners / Parkour people could do on them, and he was really excited by the project as well. We’ve sent quite a few other pairs out too to some really big names in parkour and blading… 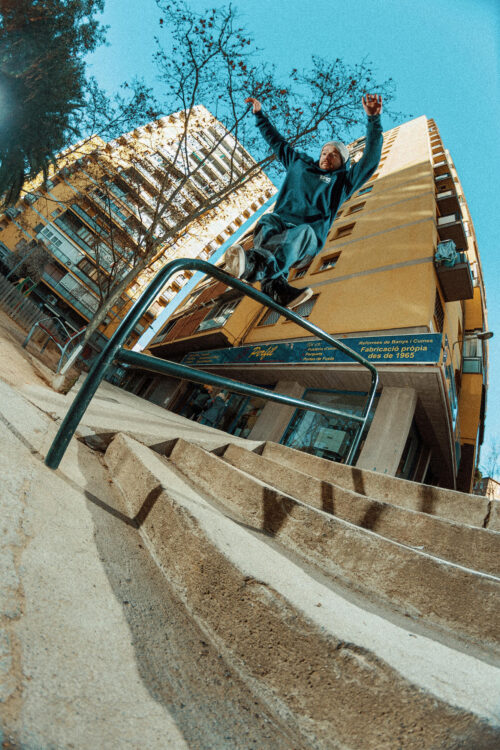 When making a product, particularly something as foundational and important as a shoe, how do you decide what it should look like?

That was so hard. A lot of opinions, a lot of decisions made with only drawings to look at, construction / strength / protection compared to looks. It’s not easy to make something strong that also looks “cool” but we’re learning. We all have our different tastes in shoes as well. I found it hard to envision what a final product would look like just by looking at a sketch. We’re looking forward to feedback to see where we go next, but we are also really happy with how they turned out. 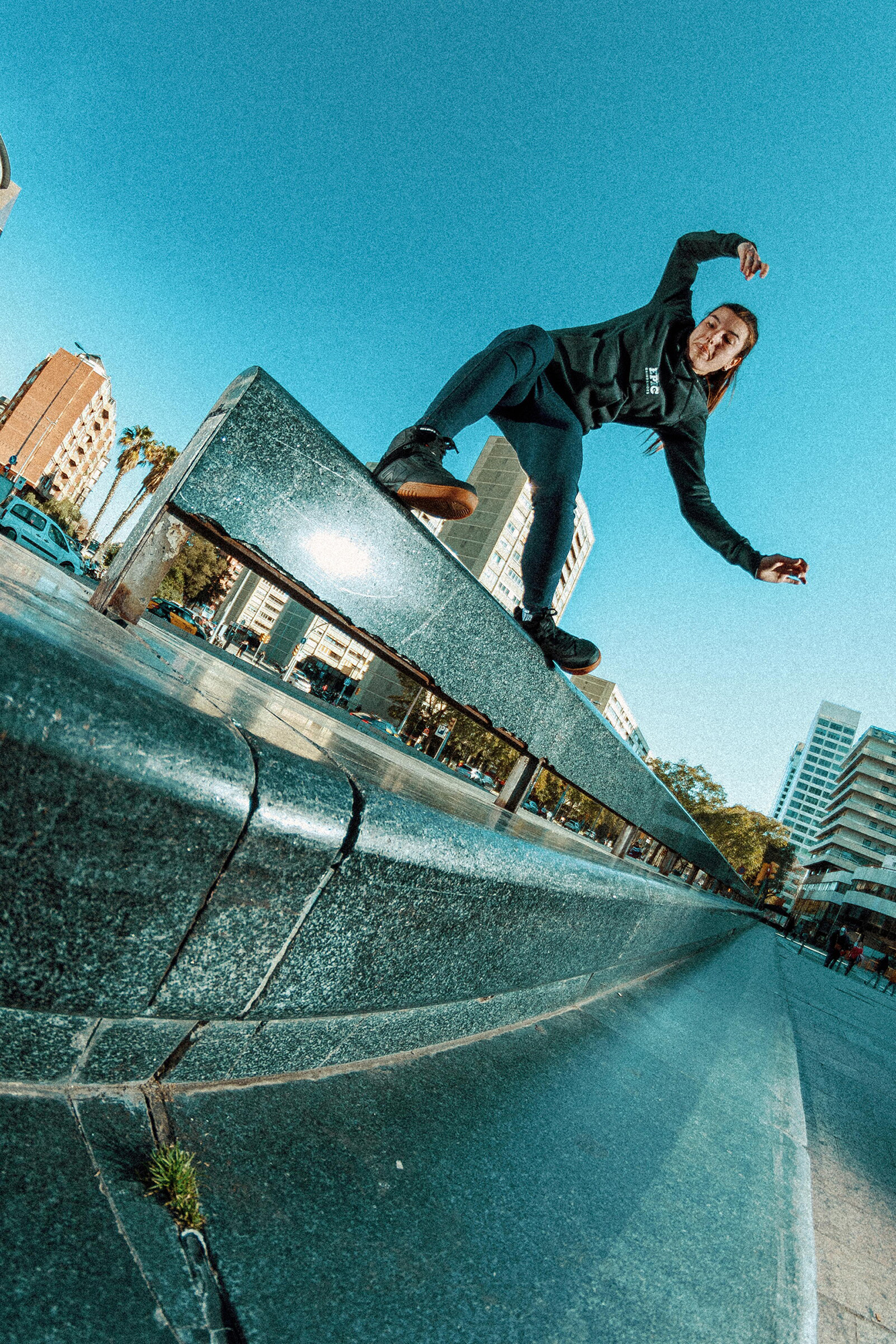 What challenges does making a grind shoe present that someone like me or the readers would never think of? I’m sure there are several…

The hardest part is finding the perfect balance between all of the elements…
Looks Vs Durability
Weight Vs Replaceability
Comfort Vs Stiffness
Shock absorption Vs Too soft (wear down too fast)
Boring Colors Vs Too far out colors
Ease of regular walking Vs Stiffness/support.

I think we smashed it out of the park on all of them though! ☺ 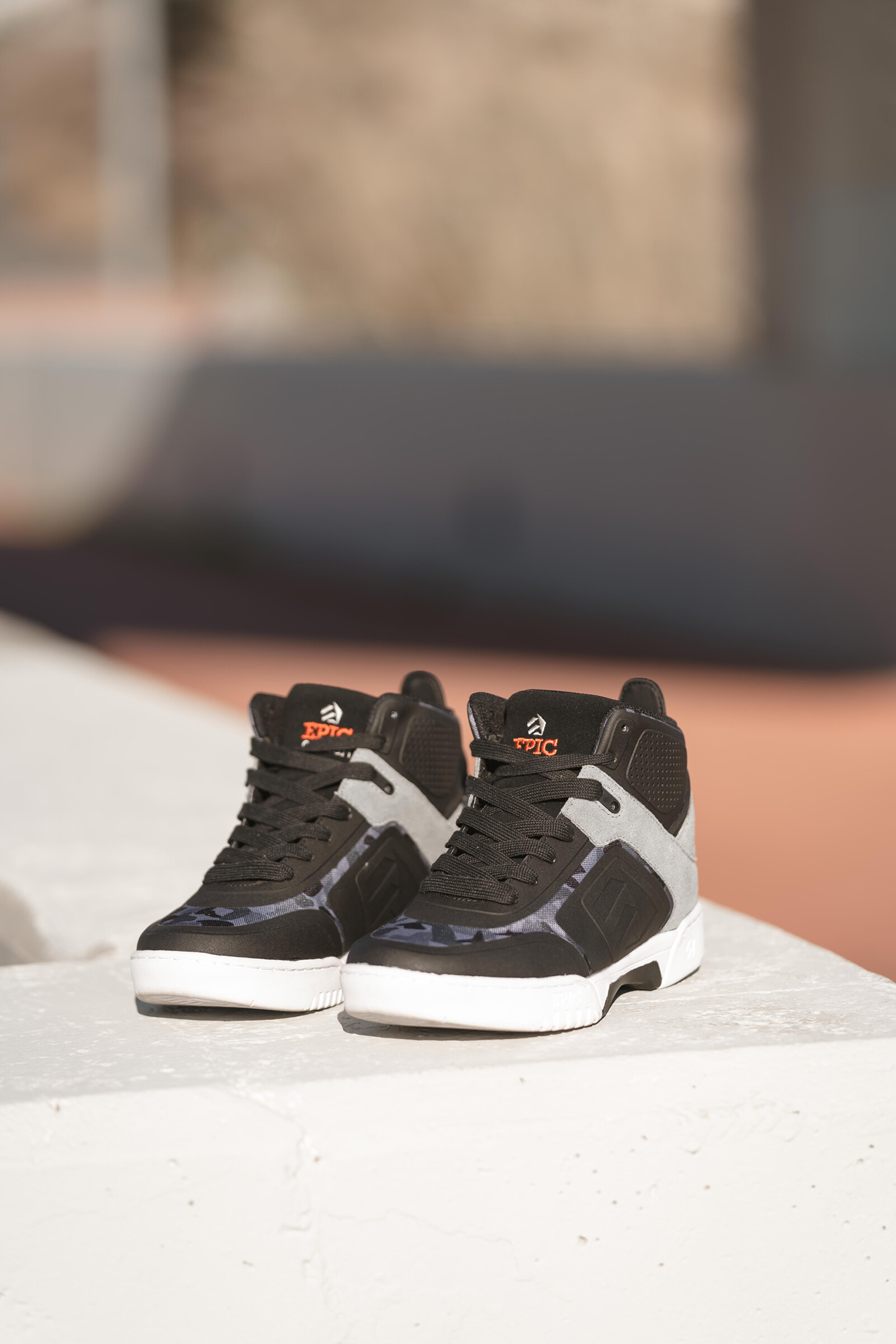 For all the old heads out there, maybe like me they remember the Salomon shoe that had a channel running from toe to heel for “soul”-based tricks. You have any other innovations like that in mind? Are we finally gonna get a Heely/Soap love child in the Epic 2.0? Blink twice if the answer is yes.

Sven Ischen actually already made a Salomon version himself and we’re open to anything for sure, the sky is the limit!

Heelys actually made a few Heely / Soap shoes, I have 3 pairs of them. In fact, they put me on the Heelys pro team to promote them back in the day when they came out, I did it for a few months, I was team manager for Spain and pro-team. I quit in the end because it was too much traveling around. It doesn’t work as well as you imagine, landing with impact on your heel is hard enough, but with a wheel at the back it means you get one small focus point slamming into your heel which hurts, you can also slide out easily, and the anti-shock function of the sole is really reduced if you’re jumping off things onto a heel… plus personally I don’t think it looks as cool as running off. 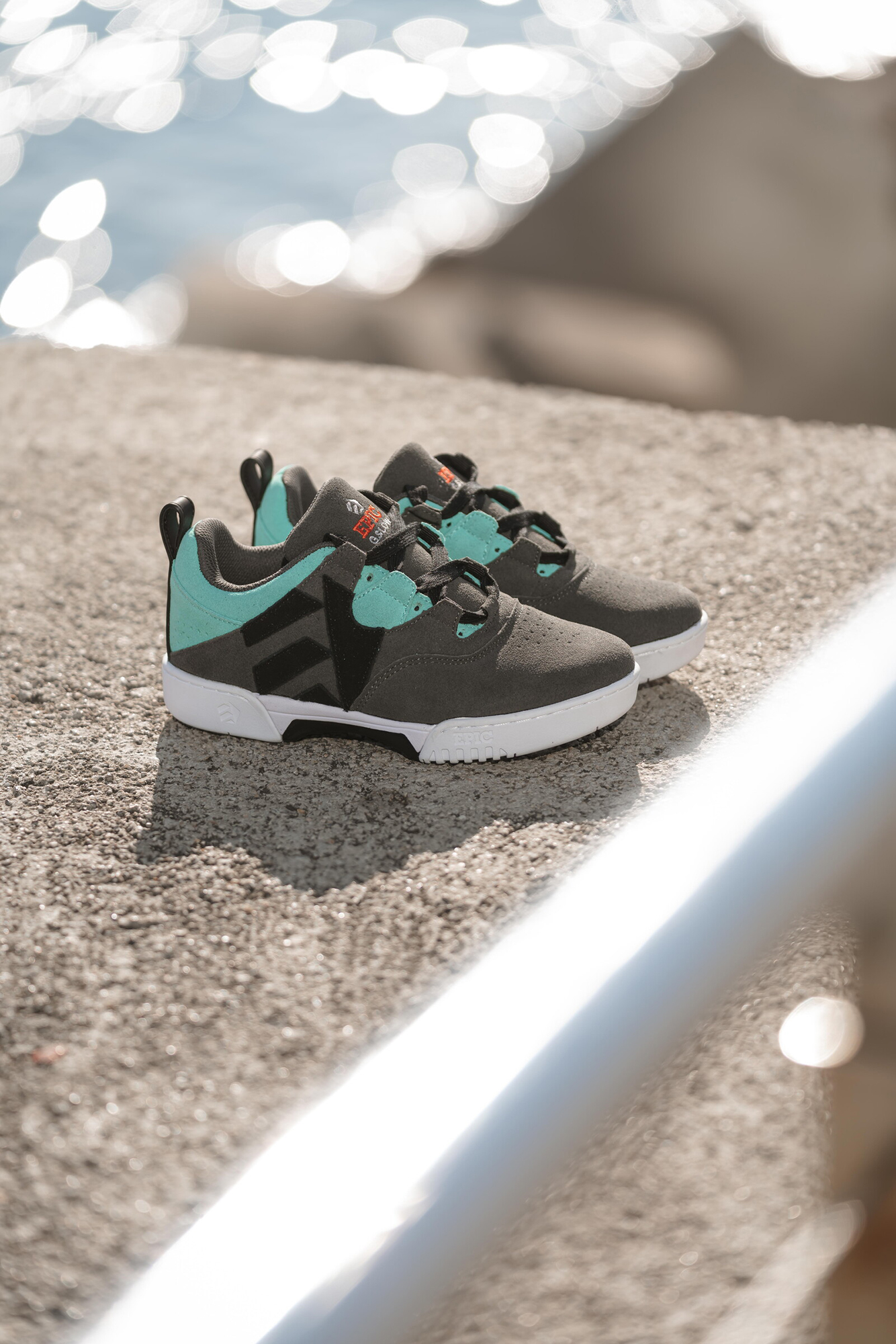 In regards to the upcoming release, was it always planned for this season, this date, or did the global supply slowdown have any impact on your plans?

So we started working on it at the end of 2019, I don’t think it was ever supposed to take this long, but it was starting a project from scratch. We had a lot of trouble finding a designer that was the right fit because the guy I wanted to work with (Javier Rosa) was overstretched with other projects, so it was delayed until we could secure his full attention, and then everything moved a lot quicker. Shipping delays and pandemic was such a long, drawn out thing that the delays weren’t a blow… just life. Luckily we didn’t promote them too early, and they didn’t leak (miracle!) and they didn’t have competition, so it didn’t really matter.

What else should everyone know about Epic, the team, of anything new and exciting to keep an eye out for?

In my dreams, Epic Grindshoes will be huge, a whole new movement of people having fun in a way we forgot for the last 20-30 years. I think the exciting thing to keep an eye out for is to see the phenomenal team do their thing on the regular, they all amaze me each and every day. I’m also really excited to see what the parkour and freerunning community can do with them.

Thanks for the time, Oli — it’s a pleasure as always.

Thank you for always supporting these things, you rock!