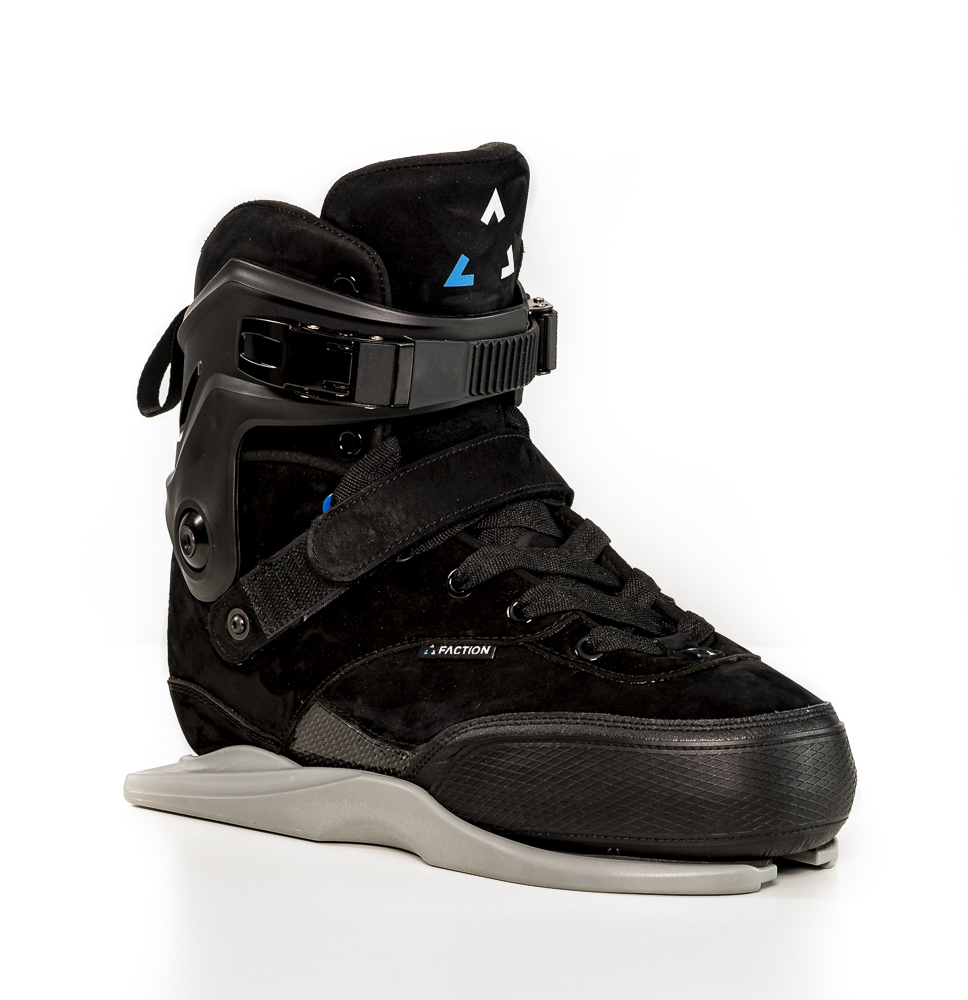 Clark Kirkman is a name familiar to anyone that studied rollerblading VHS tapes in the late ’90s. As a resident of Maryland he had access to an abundance of hotspots and crews along the northern east coast. These excursions led to clips in Chris Majette’s videos and frequent appearances in Videogroove Video Magazine.

After 30 years involved in blading, Clark found himself wanting to do more than be an active participant. With the soon-to-be released Faction Tactical V.1, he’s building what he hopes will be a new beginning. I spoke to him this week and he has a lot to share for anyone that wants to know what it’s like to start a company.

Jeff Stanger: With the resurgence of blading there’s been a ton of new companies popping up. Where did the idea of a boot company come from?

Clark Kirkman: In 2019 I was at a crossroads of my life of where I wanted to go. I’ve been rollerblading for 30 years, but I wanted to do something and give back to the community that has been so rewarding for me. Talking with my friends and saying there’s a little bit of space in the market to do something special, do something that hasn’t been done. With the few companies that were around at the time I decided to take the leap and move forward with it. It’s an exciting process, it’s a lot more than you think it is. You take it one step at a time: diving into it, making a product, choosing the team. It’s just a long process. You want to put something out that you’re proud of and that adds something to the market.

I’m just hanging in there, I’m going to try to put out the best product I can and try to grow it from there. For me it’s always been about community and how I can build community around a product and brand. To kind of rise the tide for everyone in the industry and build something cool.

JS: Mike Rios is a name I haven’t heard in a while. How did he and Justin Thursday become involved in the design of the boot?

CK: I’m the sole owner of the company, but I brought in some resources because in my past background in graphic design I had never done any shoe development or softgoods development. Also hardgoods were not my forte. CAD rendering and CAD drawing was not something I was really skilled at. So I reached out to both of them because Mike Rios has had experience working on shoe design. That really helped with the leather goods and patterning that we had to do for the original tech pack for our skate.

And then for the CAD for the soul plates and the hard good pieces of the skate, Justin has a plethora of experience. So I bought them both on as resources to make it happen. They’ve both been great to work with through the revision process and all the steps it takes to bring this to fruition.

JS: Do you have any plans to produce frames, hardware, more wheels, etc?

CK: We are trying to solely be a boot company. I really believe in the fact that you pick something and then become really good at it. One of the things that we did for wheels was kind of separate. It was more related to The Compound instagram.com/thecompoundmd and being able to have a product that allows people to purchase something while also supporting the builds. It’s all the same company but we really don’t want to be a wheel manufacturer. We want to focus on boots and build that platform for people to be able to customize their skates.

When we start producing pro models, we want to be able to provide those complete skates that people will be looking for. We are going to try to accomplish that by doing partnerships with our rider’s other sponsors and try to really bring the whole industry up. Really raise the level for everyone and grow the industry and the communities across the board. I think it’s vital to have these partnerships between companies to really put their riders on a pedestal to showcase what they like to skate and actually it be the skate they want to skate. Not just the price point that sells more.

I’ve been a stickler about that with my riders. I want them to give me feedback and for us to build a skate that they want to ride so that it really is their chosen setup. It is a skate they prefer to ride the way they like to ride it. I think the customers will appreciate that they can find that connection with their favorite riders like, “They skate just like me. I really like their setup, I like all the things that are involved in their setup,” and it makes for a unique experience across the board.

I think it’s vital to have these partnerships between companies to really put their riders on a pedestal to showcase what they like to skate and actually it be the skate they want to skate.

JS: What has been the experience of the back and forth with the factory in China?

CK: I think that’s probably the hardest part of the equation. Being a new company starting from scratch, not having the existing relationships built with factories and not having the history of creating a lot of different skate products, you really are starting from the ground up. So you have to build those relationships. Our first production run, in the scheme of things, is a small production run. We’re doing 200 skates total for the first run. We are a small fish and just being able to get the time for them to spend time making samples and making product for us to approve and then improving them to prove our concept was probably the biggest challenge.

Now as we are getting closer to the finish line on the product it’s them shipping stuff to us and getting it in time. It’s not like you send them something on a Monday and you get it back on a Tuesday or you request samples on a Friday and you get it like next week. We’re talking weeks for them to create them and then send them to us. We try very hard to approve things by sending images and stuff of them but you really need the product in your hand and to know that they did it the way that you expect it. It’s pretty standard for some factories in China to do things, not necessarily wrong, but just not as intended and you really have to keep on them to make sure they are making what you want.

That back and forth process of R&D is not a small hurdle. Before I started this process I always wondered why there wasn’t more skater owned stuff from people in the industry and why it wasn’t as prominent for people to do boot companies and why boot companies have always been an uphill battle for people to start. You need the capital, you need the time, you need to be able to go back-and-forth with factories just to get the product you want. None of that includes testing. When it gets here you also have to have your team test them and make sure they’re giving you feedback that is actionable. I wouldn’t change anything for the world but it’s definitely a learning process to go through.

It’s been great but it is stressful sometimes. There’s been nights where I have trouble sleeping because I’m waiting for feedback from China to find out if they have my samples, are they going to be shipped. They’re also on the other side of the world so they’re awake when we’re asleep. That presents its own issues. There’s a lot of little things that are a challenge. Once you get the product done and go through it you can build that relationship up into something that works a lot more fluidly.

You need the capital, you need the time, you need to be able to go back-and-forth with factories just to get the product you want. 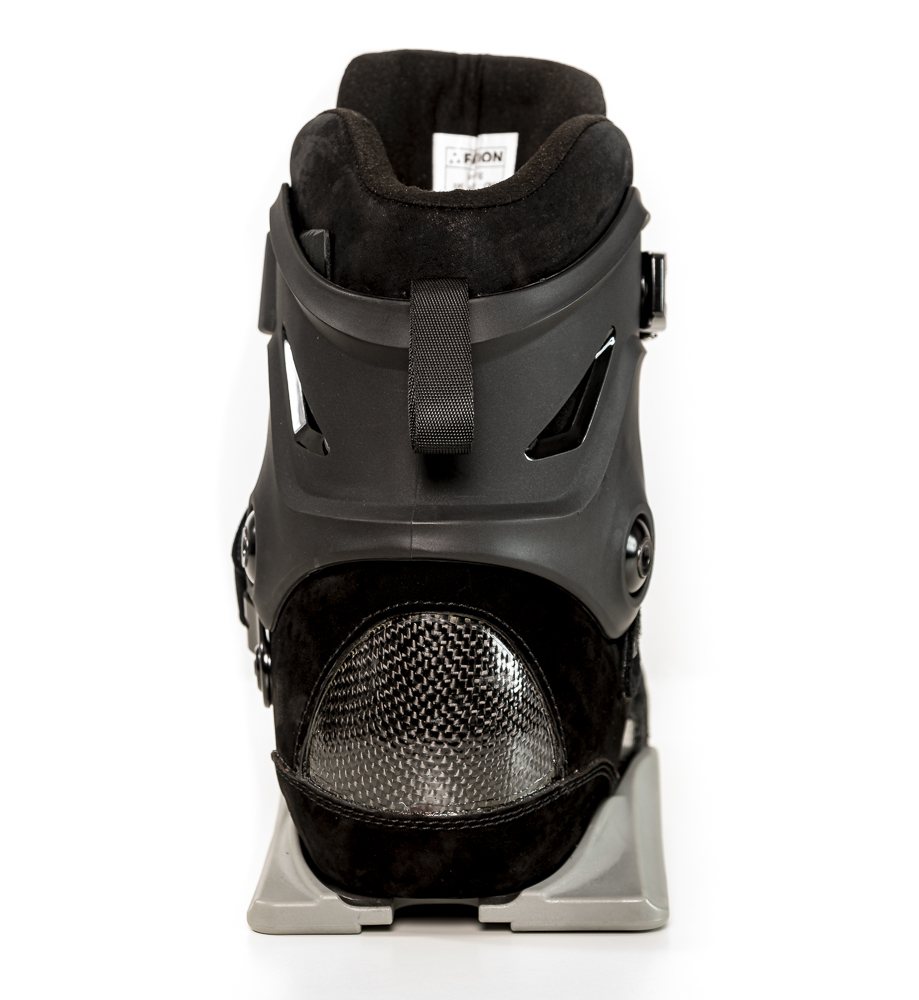 JS: Tell me about the unique features of this boot.

CK: When I started designing this boot there’s a couple things that really stood out that I wanted to make sure that it had. I wanted it to be a carbon fiber shell. I wanted an articulating cuff, so a hinge cuff. I also wanted a sole plate that had a squared off back to it. For me those three things are kind of top line for what I personally like to skate. That being said, the big picture is to be able to build some options. All the skates that we produce will fit all the sole plates and cuffs that we produce to really build an ecosystem of a product line.

We are also doing a removable liner. Traditionally, a lot of the carbons that have been made have had an integrated liner where it’s just part of the skate you really have no choice. I think that going in with a message of being able to customize and pick the things that you want to have on your skates it only makes sense to be able to replace the liner or switch out the liner for something you really enjoy. Whether that be our stock liner or a third-party liner that you’d like to use in it.

It was also important to me that we build a skate with an accurate product line strategy. So you have a mid price point which is the Tactical V.1. This will be our kind of mid to high range product, the carbon fiber boot. Down the road it is my dream and my goal to then offer an entry price point option that would be an injection molded plastic skate for those beginners that also utilizes all of our sole plates and all of our cuffs so that you can build the skate that you are looking for.

JS: Awesome. Is there anything else you’d like to add?

CK: I just want to say thank you to the industry and the community we have in rollerblading because the response I’ve gotten so far this week during the launch has been phenomenal. I feel the love from everyone in the industry and it’s been a great experience. The future is bright for us. I’m really excited to bring out the products that we’re looking to bring out in the future. Thank you for this opportunity. I really appreciate it.