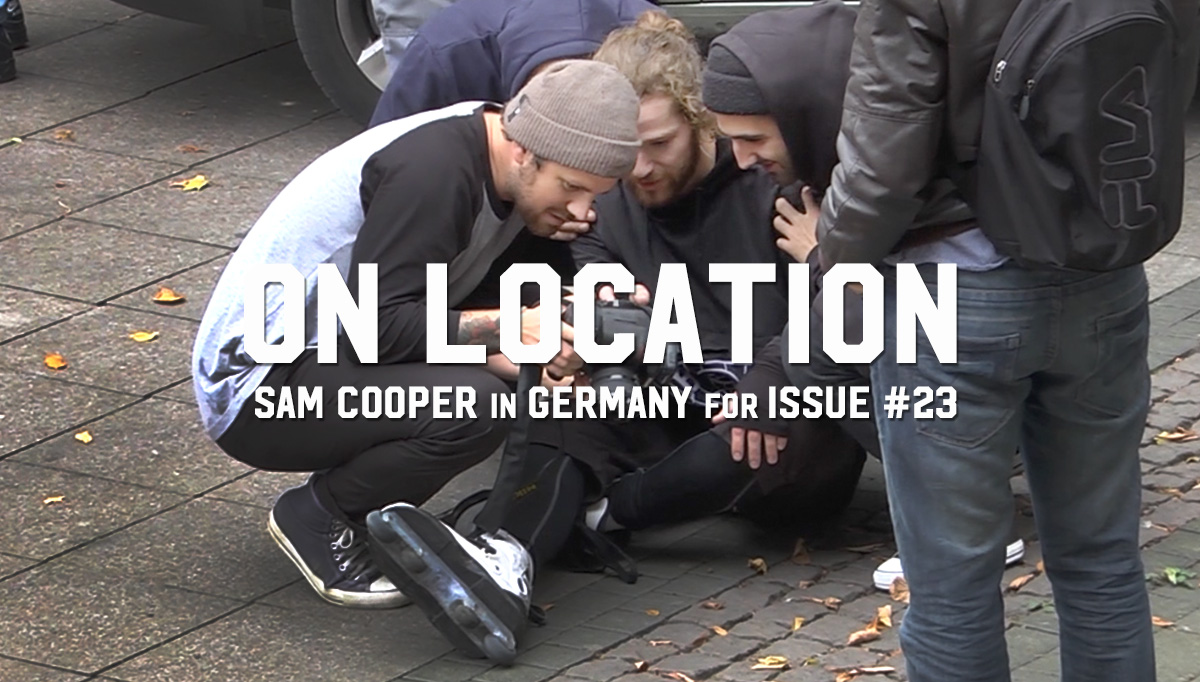 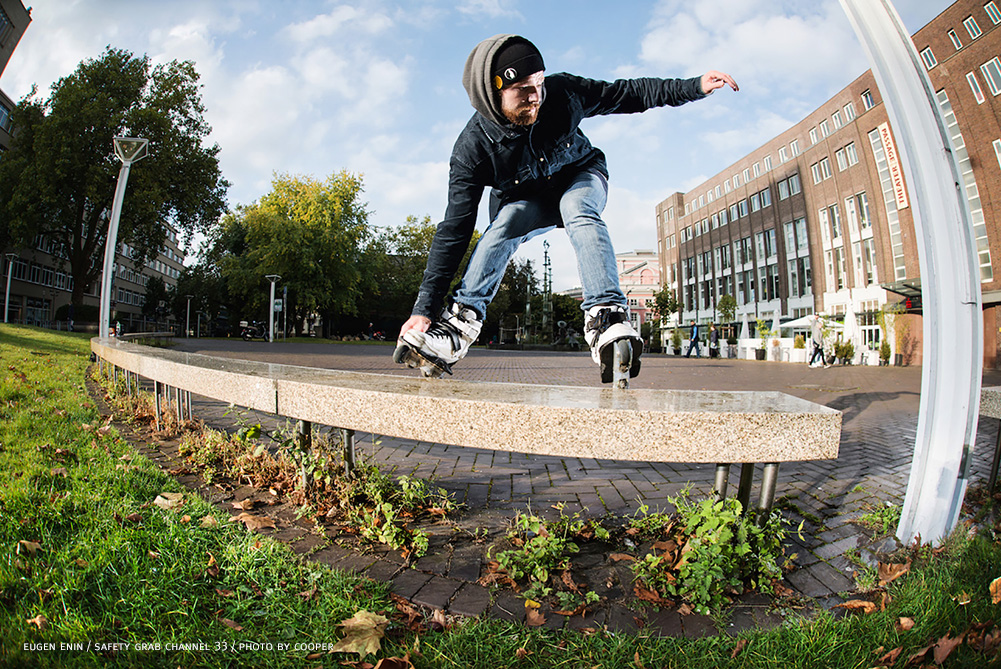 ON LOCATION: Sam Cooper in Germany for Issue #23

The newest print issue of ONE magazine ships in June, but we started working on it last fall which is when England-based photographer Sam Cooper flew to Germany and got things underway with a short stay in Borken. During that trip Cooper shot with Jo Zenk, Aleksandar Popvasilev, Joao Goncalves, TJ the cat, and of course the one-and-only Eugen Enin. In advance of the new magazine’s release — and before showcasing what may be on the cover — read about Cooper’s experience on the ground working and traveling with new people, overcoming personal doubt, and doing what you love to do. Issue #23 “It’s Coming” we keep saying — which is true, but in the meantime enjoy this look at making the mag.

With each and every upcoming issue of ONE magazine I’m always keen to get involved; forever questioning what I can do to be part of what is unfortunately fast becoming an extinct medium. Usually I will come up with some ideas and a discussion will be had to develop one of them into a tangible plan for an article, this time was to be different. Completely out of the blue Justin came through with very enticing proposal in the shape of a plane ticket that would take me to a small town in the North Rhine-Westphalia of Germany to spend some time with one of the most exciting and refreshing rollerbladers to come out of Europe in a very long time. Of course I snapped up the opportunity without a second’s thought and before I knew it I was at Heathrow Airport about to board my flight.

When approaching projects that involve shooting with people that I’ve yet to meet, I find it’s at these kinds of “point of no return” moments that small doubts begin to drift in and out of my mind. Can we produce the goods that warrant the cost of the flight? Will we work well together? More importantly, will we even get along or shall this upcoming shoot be a total social struggle? It’s funny how before the first meet up I become so fixated on one person and how it will work with them. Yet when I think back historically, there are always so many more people than just the subject of the shoot. These other individuals become just as integral as the subject to the whole process. This trip would prove the point very clearly to me once again. 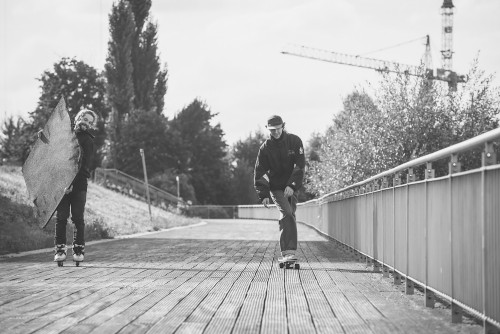 So all those worries I might have had proved unnecessary within seconds of walking off the plane in Dortmund. That’s where I found an incredibly animated and energized individual ready to greet me. I knew straight away that Eugen and I would get on just fine and the next five days would be the enjoyable experience it should be. The airport meeting also reminded me of the fact that there will be other great characters on this trip that would be just as important to the process as the main man himself. Eugen came with his brother, Daniel who has played a key roll in Eugen’s rise within the rollerblading scene. Without the younger brother’s skills behind the camera (of which are equally as good as Eugen’s skills on blades), Eugen would have lacked the needed visual material to be seen outside of his own scene. While the two brothers bickered in German about the best route to drive to the first spot like all good siblings do, all I could think was that I couldn’t have wished for a better dream team of talented people to spend the week with.

By the end of day one we were already three shots deep for the article on what was technically only a half-day. We decided it was best to head back to my home for the next five days, the now infamous Borklyn Zoo. An evening meal at the Enin’s favorite Turkish restaurant was the reward for a productive day and also my first encounter of Joao Goncalves. The good food and good times there rolled on to us all grabbing some beers, watching skate flicks while trading stories of just about everything into the small hours of the morning. This became somewhat of a blueprint to how every post-skate evening would be spent, even though Eugen kept declaring throughout the week that he wasn’t much of a drinker. Yet it always seemed to be his idea every evening. Go figure! 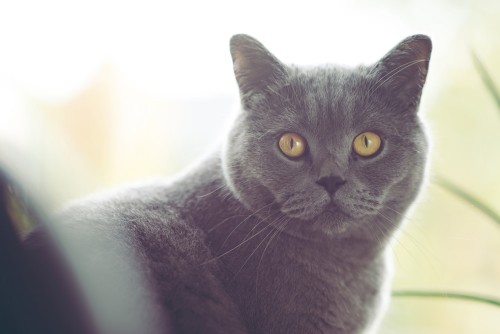 It was on this first night in Borken at the Enin residence that I also met my other two house mates for the week. Eugen’s long term girlfriend, Pia, who is the real star in this whole story. Coming back every day to an amazing cooked meal was totally unexpected but so appreciated after a hard day’s shooting. The other housemate I was introduced to that evening was TJ — Daniel and Eugen’s British Shorthaired cat. Now normally I wouldn’t mention something like this but TJ is absolutely bloody massive in both his physical size and personality, so it just has to be done.

Over the next two days the three of us hit the road and made a serious dent in the extensive spot list that Eugen had prepared before my arrival. Each day provided bigger and better reasons to celebrate in the evenings, and it was hard not to be infected by his enthusiasm and natural energy for just about everything. We need more Eugen’s in this world! After spending every evening watching blading flicks, we switched it up on Saturday by watching a new skateboarding video that Daniel had bought. The video is called “Animal Spirit” and it absolutely blew our minds in so many different ways. Just go see it, you won’t find yourself disappointed at what was done and how it can inspire you no matter what wheels you choose to have under your feet. 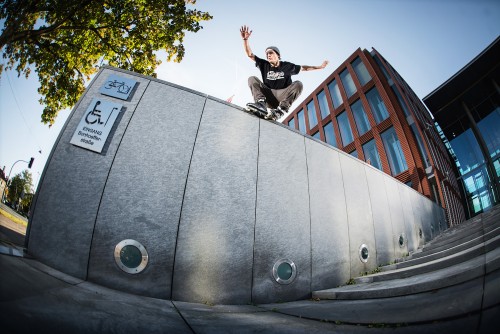 Sunday was our day to hit spots in the city of Munster but before the spot destruction could begin we went to meet up with the Remz and Ground Control ripper Jo Zenk. It was great to start meeting some of Eugen’s extended blade family. Within five minutes of being welcomed into his home, Jo was giving me a sneak preview of his upcoming Ground Control Blacklisted edit. I was getting seriously juiced on the day that was ahead of us all.

We wasted no more time and headed out into the sun, spending the rest of the day hitting up some of the best spots the city and a security-free Sunday had to offer. It really was incredible watching Eugen and Jo bounce off each other at each spot. Pushing each other to the next level and working off each other’s high levels of positive energy. This resulted in two of the biggest and most bad-ass spots of the whole week’s shooting getting conquered. The day’s blading came to an end on a massive high with everyone fully satisfied and only wishing that the day didn’t have to come to its inevitable end. 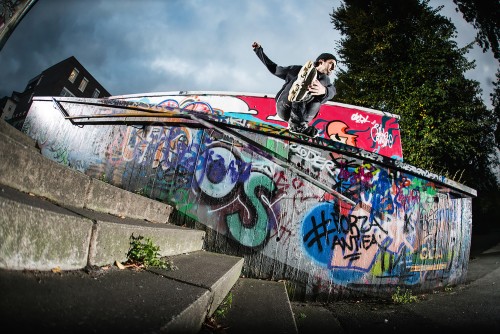 My final full day in Germany started with some uncertainty, we had a few good ideas of what we could do with our time but nothing was certain. Joao finally had a day off work so he was keen for a full day of blading, and even Pia decided to joined us for the trip. Although we had already spent a previous day in Essen shooting photos, the offer to join Jo and some of the Mnstr Blade guys was too alluring. Aleksandar Popvasilev came with Jo, adding another dynamic to both the session and to the day out in Essen.

Once again Eugen and Jo showcased what a pair of powerhouses they are from spot to spot. As incredible as they both are, I was now fully aware that both these guys were on another level… so it was Joao and Aleksandar that surprised me the most that day. Both proved just how deep the well of talent runs in this small area of Germany. Moving around the city, stopping to capture large sessions of talented and fun people, took me back to how skating was back when I was younger. 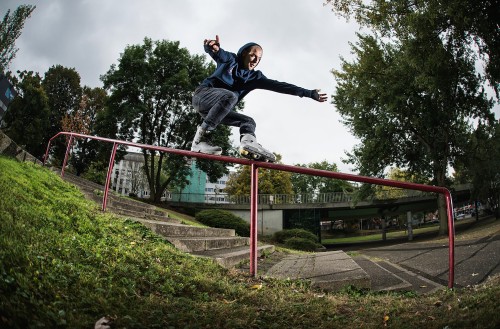 Aside from causing me to reminisce about the past, today’s session showed me that despite the doom and gloom currently surrounding our industry these rare but incredible gatherings can still happen. I think that’s because the undying spirit for this sport will forever exist as long as someone, somewhere is still lacing up to blade. Solo sessions and two-man crews are all too familiar these days in rollerblading, so it’s times like these when the numbers come out to play that it must be savored.

My time in Germany was coming to an end. I went there as a stranger to this group of people and came away feeling like there is a place there for me. The worldwide blade family had once again provided. Eugen and Daniel had made their home feel like my own while Pia made sure we were all well fed and cared for. Joao, Jo and Aleksandar welcomed me into their social circle, making sure that I felt like I belonged within the group from the very start. 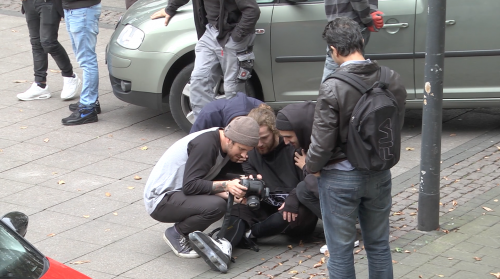 While there are too many examples throughout history of strong passions causing people to do horrific things to their fellow man, I think it’s fair to say that in these dark times the passion for rollerblading is still creating beautiful moments in humanity. — Sam Cooper

Pre-order your copy of ONE #23 HERE

Photos and words by Sam Cooper

Good write up and shots Sam. Like you said, took me back to the good days. Spot, move, spot, move…