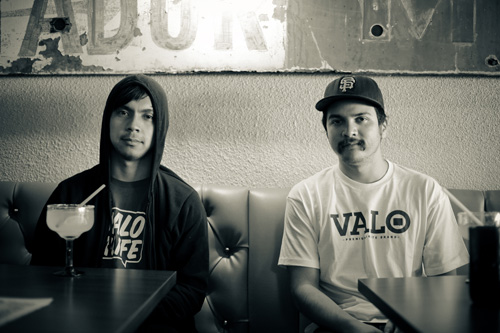 Written by ONE Staff - Published on Wednesday, December 1st, 2010

How/when was the idea for “4Life” born?

JJ: After “WAV3” dropped, I was already thinking about names for our fourth video. Right away, the name “4Life” was brewing in my head. “4Life” became more relevant as time passed. It’s a strong and inspiring title.

IN: To be honest, I am not really sure when it was all born. It was just something that kind of happened, and before we knew it, it was all happening. Now we’re here and in the middle of something that seems to a good thing. So, we’re just kind of taking it all in and seeing what we can do with it.

Are there any influences or inspirations for the project you can share with us?

JJ: One major inspiration was working with Ivan, for sure. The video naturally grew into what it is. We all put everything we had into it for sure, but Ivan is the reason why the video is as amazing as it is. He may tell you otherwise, but it wouldn’t be what it is without his vision.

IN: The biggest influence for me was just the act of blading and the life as a blader. I have been a long-time blader, just like everyone on the team. Essentially, I think I just wanted to show people what it’s really like. It’s impossible to fully capture everything that happens, you know, but if you could give people an insight on why we do it, and what it’s all about, then I think that’s what’s most important.

Being a blader is a lot more than just grinding rails and ledges—it’s everything that comes with it. That’s why we all keep doing it, for the good times and for the self-satisfaction. Filming for a section takes a lot of work. It takes a lot of tours, a lot of effort, a lot of everything.

So, granted, kids will like someone’s profile because it has all the best tricks, but to be able to show the whole process of making it makes it more meaningful. It’s not just about the 540 over the huge double set. It’s about everything that led to that and everything that happened after and everything that will keep on happening.

What sort of complications arose during filming and production?

JJ: There were definitely times where we got on each other’s nerves, but nothing too major. It’s been great times for sure. I wouldn’t trade any moment for anything. We have a great team, and the chemistry is there. A group of good friends with the same ideals on skating. I look forward to working on No. 5.

IN: Hmm… I would say complications are necessary for a team to grow together. So, there are always arguments and always little things that happen on tours where people get mad at each other for whatever reason. Being able to get past differences and still make something great out of it shows the type of people that we are able to work with. It’s impossible for everyone to be happy at all times, but everyone knows why we all do it, so that is enough to get past any complications. It essentially builds a stronger team.

I guess those are just the personal issues during filming, but if we wanted to get into a more technical side then I can talk a bit about the music. All the music in the main film has been used with permission from the artists, and realistically that’s something we didn’t have to do to make the video. We did it to try and get more people involved in the project and to try and bring a bit more awareness. It was a huge task to find the right music, contact the artists, get approvals, fill out forms, blah blah blah. You get the idea. It’s something I have never personally done before either, so it was cool to see a different side of it all. We have been in contact with most of the artists after showing the response to the film, and it seems to get a couple more people to kind of understand what we’re doing, you know.

I’m sure there are a million other things I could talk about, like burning the final disc about an hour and a half before the premiere. I didn’t even get a chance to test it and just hoped that it would work. Or, spending four days on subtitle issues with authoring programs, or being sleepless for two weeks before the premiere in SF.

There’s an endless list of complications, but that’s what makes it all worth it, right?

Is there anything in particular about the film with which you are proudest?

JJ: Seeing it all come together in the end. I’m proudest of the finished product, for sure.

IN: I am proud of everything and everyone involved with the whole project. I know everyone put in a huge amount of effort, so I don’t think there is one thing I could say I am proud of. I am proud of “Valo4Life.”

What should bladers take away from the film, or, is there a fundamental message?

JJ: The film itself shows two years of our travels—good friends traveling and enjoying life on the road. I think the production of the film brings a refreshing look on blading—something that is definitely missing in this era of blade films. Good times with good friends.

IN: I would say there is no set message to really take away from the film. It’s more of the idea of what it’s like to be involved with the brand, or even being a blader for that matter. It’s about what rollerblading is like and why we do it. I want you to take away whatever you want to take away, as long as you take away something.

We’ll see what grows after that.