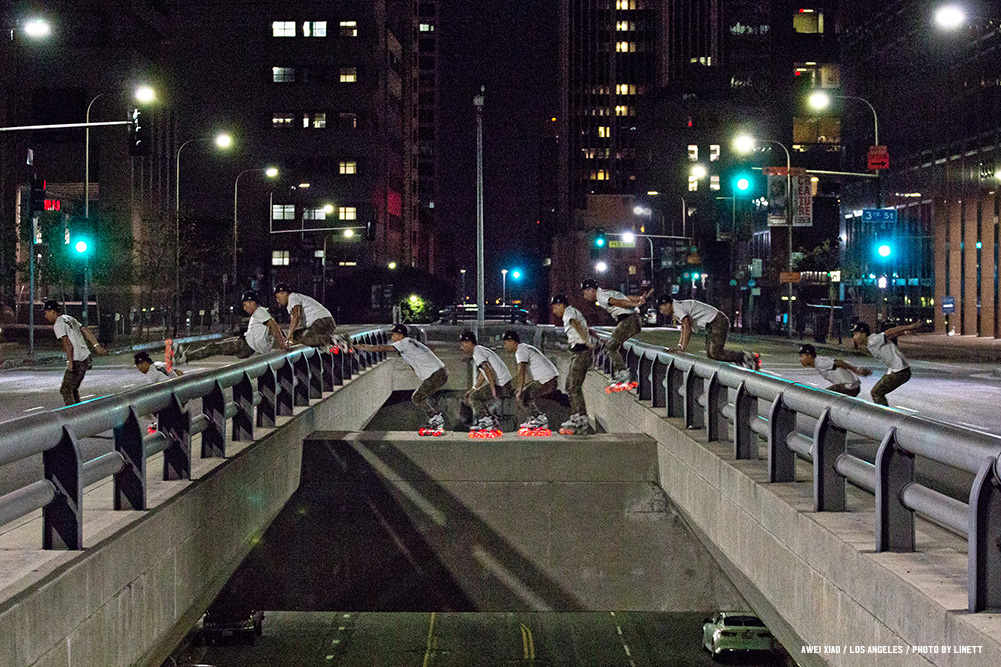 Blading in 2017 is more diverse than ever. Not just the people doing it, but the way we’re doing it. There’s so many emergent disciplines pulling solid participation in most countries that aren’t called “The United States of America” that the governing bodies are working in overdrive to keep up. Exciting! (And a bit different than the drum beat many core street skaters are most familiar with.) And a good example of this new wave is Chinese blader Awei Xiao, who hails from Hunan and is currently in the US to work and blade. Jeff Linett caught up with him in Los Angeles for some filming and photo sessions, so get to know more about the international blade picture, and see another talented practitioner of the parkour school of blade.

Tell us your name and age, and where you’re from.
I’m Awei Xiao, 20 years old, and I’m from Hunan, China. It’s close to Guangzhou.

How long have you skated?
For eleven years.

What are your current skate set ups?
Flying Eagle Drifts and USD Carbons.

When did you move to North Carolina? How has Raleigh been?
I moved to NC seven months ago. The Raleigh downtown is so good! It’s clean and there’s really only a few people, so you can do everything down there.

I heard you went to Woodward. How was that? Do you enjoy ramps and skate parks?
Yes, Woodward is awesome. It’s so much different than street, so I enjoyed it. 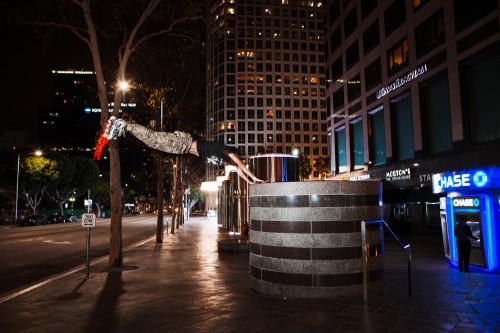 How is the skate scene there in contrast to China?
In China, aggressive skating is not popular. And there are not skateparks in every city. Chinese skaters like to play around in the piazza areas of the city, so slalom and slide are popular.

You drove cross country to skate in Los Angeles for a few days, how was the drive?
I drove my car during the day and I skated at night, then found a hotel to get some rest. I spent seven days making the trip from NC to Los Angeles.

Why do you prefer the 80mm setup?
I pretty much always use 80mm because it’s so nice for control. 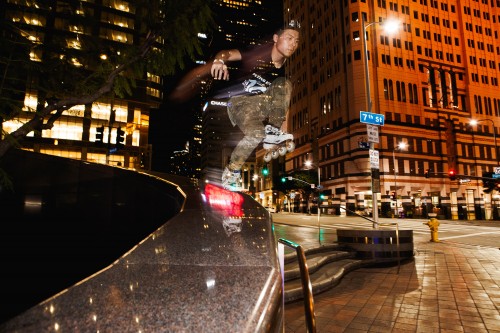 Are you friends from China all skaters? Do they practice slalom style?
My hometown friends practice free skating. Other skaters in the city only do slalom or slide.

Did you have an aggressive setup in China?
I did, but there’s not really anyone to do tricks with in my city. So I found myself doing less and less.

What about parkour? Have you always incorporated this style into your skating?
Using parkour moves lets me add more motions into the action. There are so many opportunities for awesome action. 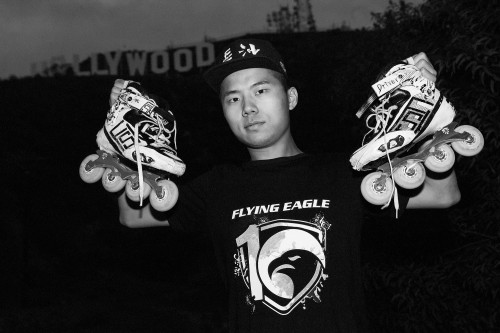 Are you planning on staying in North Carolina for awhile or do you plan to heading back to China?
I’ll go back to China at some point — if for nothing more than spreading the word about freeskate and aggressive.

Well good luck! It’s been fun blading around the city.

Photos and Questions by Jeff Linett. Edit by Michael Kraft.