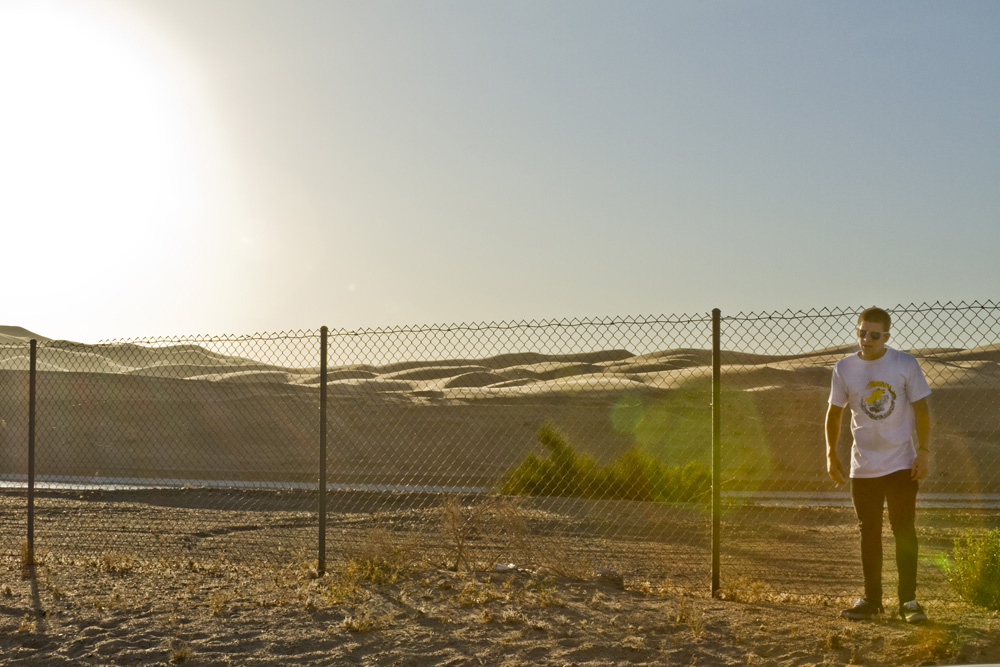 I first met Texas’ Mason Richard and Scott at Revolution’s Thursday Night Skate as they were passing through Arizona on a little two-man road trip. That same night at a little get together we got to talking, and decided I would tag along to California with them in the morning. In true rollerblader fashion, a few hours delay had me thinking it was just a good booze-inspired idea. They pulled through though and we headed out through the desert. One of my favorite things about rollerblading is the ability to go on spontaneous adventures with people you’ve known for less than a day, simply because you’re down with blading.

We arrived at Russell Day’s rather late, and planned on an early day of blading the next day. We met up with Lyle Shivak, Jimmy Ormsby, and Steve Steinmetz at a little park to warm up before moving on to a nice handrail for the first spot. Lots of good tricks went down until somebody driving by honked and yelled at us, me in particular, for being in the street shooting photos. Well, he got a classic Santee retaliation, speculating on the intelligence of his brains and the vulnerability of his little boy. After a humorous and almost violent altercation, we decided to pack up and move else where.

There proved to be a lot of climbing over and under fences on this trip, but was well worth it for the quality and quantity of spots that San Diego’s schools have to offer. From what I encountered, California schools really are as perfect for skating as the less-priviledged of us have been led to believe over the years. It’s easy to see why California has bred some of the best rollerbladers we’ve ever seen. Needless to say, we had pretty successful sessions during our stay. Even when Russell had to work, other local bladers were more than willing to show us around. There was no shortage of blading hospitality.

The nights were filled with plentiful , which resulted in the loss of personal property (and my voice) to the Pacific Ocean and the consumption of classic California beach shack burritos the following mornings. Sometimes it made for serious lagging and lack of motivation, but once you get your blades on in that cliche, perfect California weather, the hangover usually fades away.

As the trip was coming to a close, we met up with Kato and Nick Wood of Remz at the smoothest park I’ve ever been to, who invited us to a beach bonfire after SDSF’s Monday Night Skate. The Razors guys were at SDSF when we got there, and were friendly and fun to blade with; clapping and giving props to everybody. Mason took a really hard collision though, so it was time to head to the beach.

A bonfire on the beach was the ideal way to end our stay in San Diego. There were bongos, beers, not so many babes, but good people nonetheless. The whole scene really was straight out of television or something. In fact, there was actually some kind of production crew at the beach filming something when we pulled up. Well, Kato cooked up some amazing potatoes over the fire, Nick beat away at the drums — sort of — and we all shared beers and good vibes on the Pacific sand. 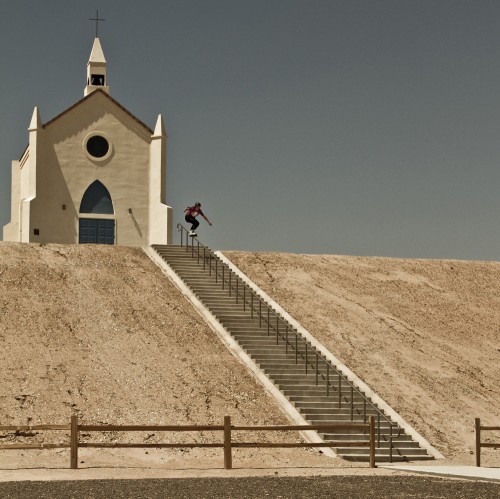 We were in no big rush to get back to Arizona, and it was a good thing we weren’t because the german shepherd at the border patrol checkpoint didn’t like us too much. The police search was inefficient and we were back on the road scott-free (no pun intended) shortly. Passing through Yuma, we spotted a gigantic 50-stair rail at a church in the middle of the desert. Scott pulled a u-turn and got one last-minute banger in before our San Diego excursion was officially over. We met some good people, skated excellent spots, and I can’t wait to do it again. — Kris Troyer

cool story, really pumped to see dave monatez in there he is a minnesota boy

Maaaan it was fun reading it. Nice!