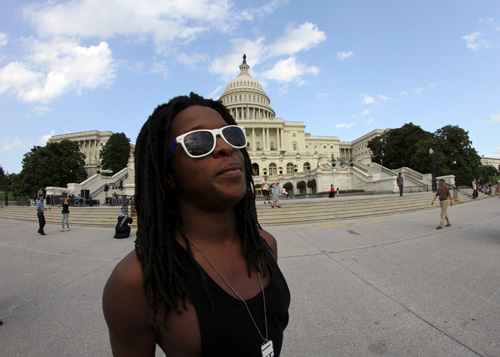 Despite what that first paragraph might make you believe, I’ve never been the most patriotic American; often far from it. I’ve never been one to wave the flag and chant “USA! USA!,” but it was hard not to feel proud to be from the land of the free and the home of the brave Friday afternoon, seeing Montre Livingston lace a misty flip off the steps at the Capitol in front of a crowd of around 100 people. The crowd of tourists and D.C. residents gathered was like looking at a sampling of the giant melting pot that is America. The Asian family asking Rob Guerrero to take their picture in front of the Capitol dome, the three Muslim women in hijabs, families in baseball caps with kids eating ice cream cones, business men and women tapping away at Blackberries and carrying briefcases, armed policemen, security guards, and a few homeless people posted up.

Late Thursday evening Kevin Dowling, Montre Livingston, and Rob Guerrero arrived in Washington, D.C., to kick off Kevin’s Olympus My Story tour. In brief, Kevin won a video camera and $5,000 to make a documentary that will have a chance to be shown at the U.S. Open Tennis Championship.

I believe that with his film Kevin not only wants to celebrate rollerblading, but America as well. While driving around D.C. Kevin said, “I’m trying to take patriotism back. I want this movie to be about freedom.” I’m with him all the way. I think that patriotism, love and devotion to one’s country, in recent years in America, has been confused with the arrogance, chauvinism, and bigotry of the few. I believe the time has come for America, as well as rollerblading, to celebrate its diversity.

One quality of Kevin’s that I have come to respect is his willingness to admit when he is wrong and make a change for the better. The father of Team Hate now preaches a message of love and unity among the rollerblading community. Some might see this quality as a weakness, but it is a strength. I have no doubt in my mind that Kevin’s documentary will win, and he couldn’t have picked two better representatives for blading.

Rob Guerrero is about as rollerblading as you can get. I learned that in November Rollerblade will release the Rob Guerrero pro skate. Friday morning I held the clear boot with a white cuff and grey soulplate in my hands, which Rob referred to as “the Macbook pro blades.” Looking at them all I could do was smile, turn to Rob and say, “It’s about time.” Kevin replied, “That’s what everyone has been saying.” Thank you Rollerblade. This is the best skate you have made in years.

I met Montre Livingston when I lived in Charlotte, NC for about a year, split between 2003–2004. It happened to coincide with the time Montre started skating. The skate house I lived in made me understand fully what Josh Petty was rambling about in “F.O.R. 2” about the FP house being like Pleasure Island in “Pinocchio.”

Almost every weekend our house was invaded by my roommate’s younger brother, Andrew, and his friends who made up the next generation of Charlotte bladers, including Montre. They would smoke, drink, smash glass bottles in the yard, and skate our box outside at 3 am. Needless to say, our neighbors loved us. After one of these nights at the house everyone convinced me to come film at the ledge spot. (Kenny’s R.I.P. ledge spot edit.) When I first met Montre I was impressed by his skating, endless energy, the constant grin on his face and his friendly, humble nature. It’s about 6 years later now, and I couldn’t be happier to see Montre’s success and where skating has taken him.

Friday morning we awoke and headed to the local skate park to warm up. A camp for young skateboarders was finishing up for the day as we arrived. A few kids on skateboards still meandered around the park, and the rest of them sat at the picnic tables outside the park in the shade, eating snacks and drinking juice boxes, waiting to be picked up by their parents. After skating for a few minutes, I looked up and realized a small crowd had started to gather outside the park to watch. About 10–15 kids were standing at the fence, some still wearing their helmets and pads and clutching their skateboards that were almost as tall as them, watching the impromptu demo by Montre, Rob G, and Dan Breur. The crowd got bigger over the next 15 minutes as random families on walks, joggers, and tennis players stopped in their tracks, mesmerized by the spinning, flipping, dreadlocked blur of Monte tearing up the park. One skateboarder in the park said, “I’ve never seen technical rollerblading like this before, it’s sick.” These kids were young, and had probably never really seen rollerblading. None of them grew up reading anti-blading propoganda in Big Brother and Thrasher. Their minds were fresh.

It was a scene I saw repeat itself throughout the day wherever we went downtown. Tourists would stop to take pictures and cell phone videos, and all kinds of people were talking to us about skating with big smiles on their faces. When Montre hucked that perfect misty flip in front of the Capitol I heard the crowd gasp in amazement and fear, then begin to applaud as their perceptions of what rollerblading is crumbled in front of them.

Blade hate is as prevalent as ever, but for the first time that I can remember it seems that rollerblading as a whole isn’t really concerned with what the rest of the outside world thinks about us. There is even a slight chance that we might be getting over our obsession with the death and future of rollerblading. I haven’t heard much bitching about rollerblading not being in the X-Games or on Fuel TV recently. If Kevin wins this contest and blading is shown in Arthur Ashe Stadium during the U.S. Open, it will be on our terms. Skating will not be shown how a major network wants it to be shown, but will be presented by three of the most sincere and dedicated people in rollerblading to an audience of 23,200.

Blade pioneer Chris Morris. Often credited with the first drop-in on a pool. Also made Soap Shoes. Pic from the Todd Olson archives.

Most of people’s slights at rollerblading are now obsolete. It is impossible to say rollerbladers are posers, copiers of other sports, or void of our own roots or history when watching Montre and Rob G skate. There has been a community of people hurting themselves on rollerblades for around two decades now. A community with its own language, history, traditions, holy lands, legends, tricks, and beliefs. The whining, complaining, and begging to be accepted is starting to disappear. I think rollerblading has finally had enough of the bullshit and disrespect. We are taking it to the steps of the Capitol. — Ben Rogers

Love the positive feel in this article. I feel the same way about the general public when I go out blading now.

one of the best articles i have read about blading in a long time.

Wow. Thanks so much for that Ben!

Well written and accurate. The three individuals involved with this film are respected ambassadors of our culture. Focusing on American belief and value is a great trend I see cropping up. We (American’s) seem to be recognizing a need for “pride in country” again, and it’s really refreshing. All the luck in the world to a great storyteller a wise man and the star of the show.

thanks so much for this article!

Big congrats to Kevin, Montre, and Rob G. I saw the “Macbook Pros” two weekends ago and they’re tight!