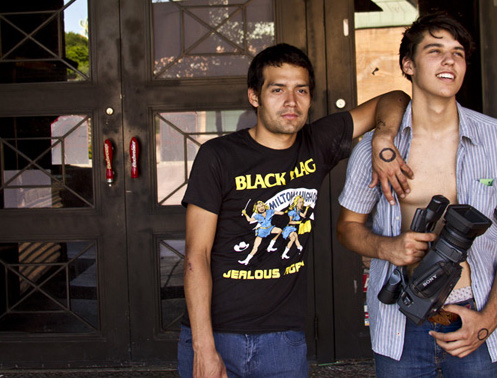 Written by ONE Staff - Published on Sunday, February 6th, 2011

Sergio and Devan in front of another Thursday night tradition.

Since almost the beginning, ONE has been featuring a SCENE spotlight in every issue we’ve printed. And now we’re expanding that concept and bringing the idea to the web, where space and medium (video/text) is limitless, starting with a report on Arizona by Kris Troyer. He snapped pics and talked with key figures about what’s caused the Phoenix area have such a huge impact on blading, and it’s a cool story. Now we just need to know about your scene, so get on it. — ONE

James Johnson: The community we have established in Arizona draws skaters to it. For Revolution, we have focused on building a strong scene on top of the shop. Traveling skaters come to Rev, session with our skaters, hit up our spots, and they instantly feel apart of something. Everything here makes sense for rollerblading. It is how our industry should be. Arizona skaters live rollerblading.

Few women are as actively involved in and love the blading community as much as you. What is it about the AZ scene that is so important to you?

Gretchen Johnson: The community is what I love about our scene in Arizona. My love for rollerblading is simply the rollerbladers themselves. There is this “thing” about rollerbladers that when I meet them, I automatically feel a connection to them. You can’t describe it, it is just there. Obviously, having a storefront for Revolution, the skaters in Arizona have become more like a real family. I see them six days a week, they have become part of my life. When I’m at the store, and any of my skaters come in, it makes my day. That is what I love about this community, and it kills me when I hear about other skaters from around the world that don’t’ have that.

What are your feelings on the current state of blading in the Phoenix area? How does it compare to when you were making a name for yourself blading here?

Dustin Latimer: Of course rollerblading is amazing; there is always good stuff going on, and the opposite all the same, just as it has always been. All on what you perceive of rollerblading, day to day, determines what you consider “rollerblading.” If you see only good rolling, progression, kind rolling, then how can you speak of rollerblading any other way? That shit is ill. But yeah, if many aren’t rolling kind, then what of the general perception seeing this? Then they know of “rollerblading” as just this.

And comparing it to my day? All I ever did was rollerblade and love it. Consequently I made a name, but never for making of a name, but to display my idea of “rollerblading.” Does it mean that rollerblading was that way? Sure, if you saw it that way.

Jon Jenkins wandering around at the Tucson Spine Ditch.

AZ attracts a lot of visitors. Who’s been here recently, who’s coming, and what for?

Jon Jenkins: Recently, we have had a non-stop flow of people coming into Arizona for various things. We have been lucky to have Haffey, Shannon Rodgers, Paul John, Franco Cammayo, Dylan Davis, Matty Schrock, Gumby, Wild Bill, Gabe Holm, Sean C, Colorado heads, and many more that I probably forgot. When these people are here, it is our job to take care of them. We usually like to set up video premiers and sessions, and take advantage to shoot with them for new projects in the works, like Revolution 90 Second edits. We also want to make sure they have a great stay in Arizona and will want to come back to visit. I don’t think you get all that when you go to other places with skate scenes. We try to set that example here and hope that other scenes will follow.

As for people coming to Arizona, we have the most visitors in the winter because everywhere else in the US, for the most part, is freezing. Soon even Mathiue Ledoux and his wife will be coming out here. We also have Chris Famer, Bolino, Keaton Newsome, Umberto Tosselli, Nemo, GC Team, Matthias Ogger, and of course another big Roc City trip, which is going to be a big production this year.

The Brierley Bros, Mason Richard, Chris Tinsley, Langel and Scherf out on a session.

What do people have to look forward to that’s coming out of AZ in the near future?

Luke Kimberly: Well, I just can’t say enough about that. As far as skaters go, theres three younger skaters that are just getting retarded good, in all the right ways too. First off, Alec Gentile and his cousin Eric are both excelling quickly with good trick vocabulary and amazing style. Xathan Stewart is getting up there too. Really solid, clean style. There’s also several really good filmers/editors out here as well. Devan Stewart’s work has gotten really good. The video he is currently working on “Evil Never Dies” should be quite good. Then we have the local kings of HD with Jon Jenkins and Kris Troyer, they both put out really nice work. All of the footage from Kris’ upcoming project “Help Wanted” looks pretty damn good. He also shoots some amazing photos as well. Ryan Buchanan has always done amazing work; he’s like the next Carl Sturgess, and he keeps it classic, still shooting with a gl2. His newest video “You Become a Monster” is going to be amazing. Too much good stuff… ha, ha.

Alec Gentile swings the twig and berries into the Payson River with this backflip.

How does growing up in the Phoenix area effect the growth of young rollerbladers?

Xanthan Stewart: The people I skate with are the coolest guys. Like my brother, Devan, and my friends Alec Gentile, Eric Gentile, and Britt Myslinski. They just get me so motivated to get out there and blade my hardest. When I first started blading, I really looked up to Chad Hornish because I thought his skating was so sick and stylish, like all the skaters in Phoenix. It was really cool growing up in Phoenix because when skaters from all over the country came down to visit Revolution, I was there every time to blade Thursday Night Skate and go out and street skate. And that got me really juiced to keep doing what I do.

Photos and interviews by Kris Troyer.

Haven’t been to AZ in years. Making a visit to shred w/ these cats soon. Rev/James/Gretchen/AZ Scene for the win!

Wow. AZ is for sure on top of it. There is a guy in Nashville Tn. I can’t remember his name off the top of my head but he is creating a pretty big thing down there. I hear that people are going there to rollerblade just like everyone out west is heading to AZ to shred. ONE should run an article on the two together. They are the biggest movements I know of. BLADERS WORKING TOGETHER TO CREATE UNITY. This shit is so fresh. Fuck yeah for James and his wife. Keep up the hard work Phoenix.

Proud of everyone involved, thank you to Kris Troyer for being the motivation behind this article, and ONE for the opportunity.

I am from the West Valley Peoria Arizona to be exact. I moved here not to long ago and havnt found any fellow skaters. Is there anyway i can get in on a sesh. Email me back and let me know thanks.