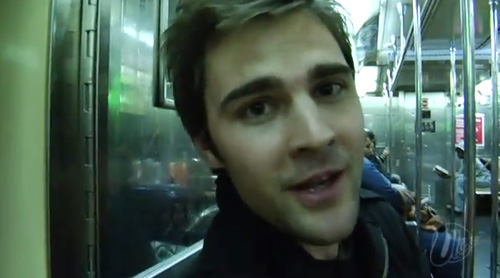 Written by ONE Staff - Published on Wednesday, December 29th, 2010

I live in New York City now, but for most of my life I lived in Ohio. I’ve also lived in San Diego, Chicago, and New Haven, CT. What do most of these locations have in common? They are all in the Northern Hemisphere… and you might be thinking, “No shit, man, I passed second grade geography.” Well, the point here is that in the Northern Hemisphere (especially in the northern states) it gets dark pretty damn early as winter approaches. And this poses a huge problem for street skaters. The exception is the few well-lit spots or the rarity of a sick skatepark having stadium lights (a rarity).

This is the same problem we face here in NYC. The one saving grace however are the Wall Street Ledges. And how peculiar is it that the most guarded and high-security real estate in NYC has the one skate spot that no ones cares if you session?!

The session was going well despite the cold weather keeping progression to a minimum… then, disaster. Certain tricks have a higher chance of getting broke-off on. And certain tricks have a higher pain rate if you DO fall… one of these peak pain/broke-off ratio tricks is an ally-oop top soul. This is especially true of AO top souls on ledges. A few centimeters off and you are going to eat shit… and this is exactly what happened. I committed to the grind full on (knowing I was going to revert out), then I felt the slip. I was on top of the ledge, not locked on, and in an instant I whipped around to avoid a full face plant. The result was a full on belly flop. It truly is incredible how many body parts you can injure in just one swooping fall.

The wipe out pretty much killed the session. On the optimistic note… I didn’t break anything and have one more day to blade on!

One of the defining attributes of NYC is the street artists (not the skating ones). I am referring to the music and dance artists that roam this concrete jungle and make a living entertaining tourists, natives, and people like me going to and from skate spots. One day I got to thinking: How could I integrate this performance of street artist music into the street artist skater? Then it hit me! Record the artists, take their music and mix it into a hip-hop beat ,and then mash it up to a skate edit. That will make one hell of a video just oozing with street artistry.

This was the goal in mind, and this was the project to be made. I hired a professional sound recording artist (one I became good friends with over the summer from the movie “College Musical”). Then myself, Brazil, and Aaron Miller (the sound guy) hit the streets of NYC. In a calculated six hours of shooting and with a well-planned subway route we found about ten musicians giving the world a show. Some of these showman were excited to be filmed and put on damn good shows… others were bitter and as “Hollywood” as it gets.

We are currently making the beat from all of the musicians we found, and the skating filming is still in process. Episode 05 will show the last of the “making” process with Episode 06 serving as the “NYC music/skate mash up”… it will truly be a NYC street artist masterpiece. — Nick Uhas