Damn, time flies! Two long years ago Brandon Ford blew into San Diego for a day or two, so he linked up with us for some sessions. Long June days turned into night sessions where Sean Macgowan, mid-rear sync period, was able to capture a few moments to document the visit. We’ve known Brandon for who-knows-how-long (most memorably a long-ago morning-after airport shuttle ride leaving BCSD), so it’s always a blast to catch up with an old friend and get to watch him shred. Anyway, here we are, two years passed, a few crossed wires later, with a look at what Brandon’s been up to in 2018. Chances are he’s having more fun and blading more than you, so read on for a taste of that Biff life.

Okay Brandon, tell everyone who you are and where you live.
I’m Brandon Ford. Most people call me Bford or Biff, and I’m from Boston, MA.

But you travel all the time, right? What’s that about?
Yeah, I’m on the road a lot for work. I’m a mover, but I prefer the term “relocation specialist” because the shit I do far surpasses just getting your shitty Ikea desk into your dorm room.

How many days a month are you on the road?
It depends. Moving season back home is May-September 1st, so I go hard for those months and chill in the winter.

What’s that do for your lifestyle?
I dunno, I guess that is my lifestyle.

Haha, right on! Well let’s talk blading — when did you start?
I started blading when I was 9. My brother was a product tester for Roces. They had an office like 20 minutes north of the city. Back then, all we did was “stair bash” and “hit this shitty launch ramp to flat.”

Who was the first person to help get you on skates?
This dude named Skip owned a shop downtown. He gave me a pair of RB Lightnings. 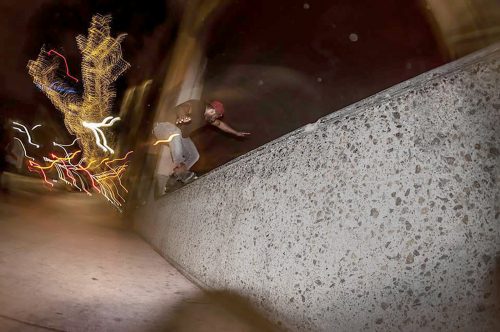 What about early influences and crew. Tell u s about ‘em.
Obviously the Nature dudes. As kids, we would take the train into the city and meet up at the navy yard. On a Saturday you would easily see between 30-40 kids, no bullshit.

It was crazy. Mobbing the city 10-20 deep. It was unreal. You’re lucky to get four heads together nowadays.

Did you ever compete and stuff like that? Share a notable experience if you have one.
I did NISS and ASA as a kid. I did some demos and shows with a few stunt teams as well.

What’s blading in Boston like compared to all the places you visit while working?
Blading in Boston is cool because it’s just with the homies — ya know. It’s more about just meeting up to kick it. Goin’ thru the FB groups when I travel to new cities is cool and convenient, but I don’t really know shit about them. So sometimes it’s awkward.

If you ever had to move, where would you want to make your new home?
I am never moving. I’m % grade A Masshole. But i do like NYC, SF and Seattle.

Event or destination to still have to get to?
Winterclash and Blade Cup.

What’s the setup you’re skating right now?
I got some Sebas.

Last piece of blade equipment or media you bought?
I bought the Monte Sways but they feel like a fucking stripper’s shoe. My feet go numb after about eight minutes, so I’m gonna toss them to some kid or some shit. I dunno. 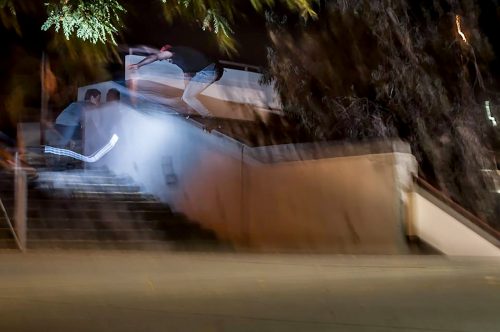 So when do you think we’ll see you out west again?
I was just in Portland, OR and San Fran. So sooner than later.

We look forward to it! Now let those shout outs fly.
Shout out to all my critters and my critterettes. You know who you are.