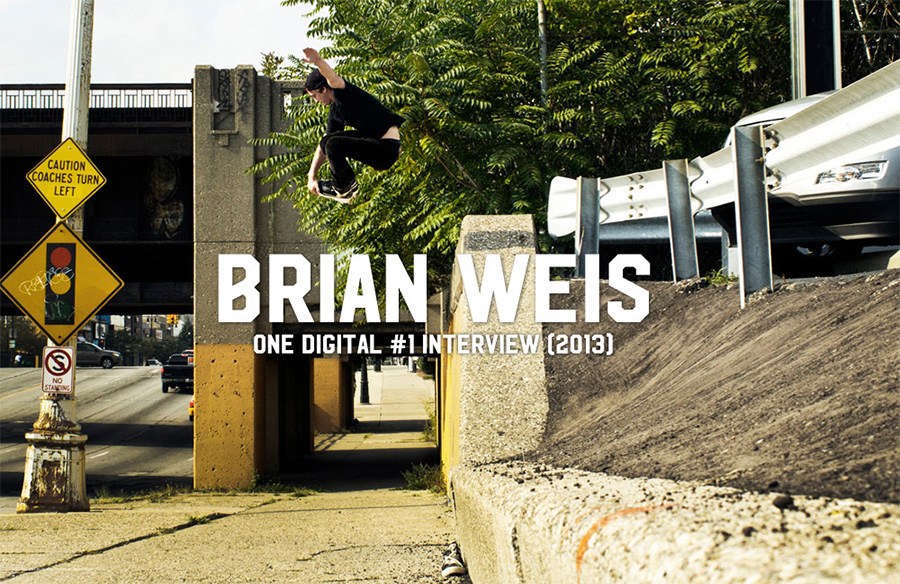 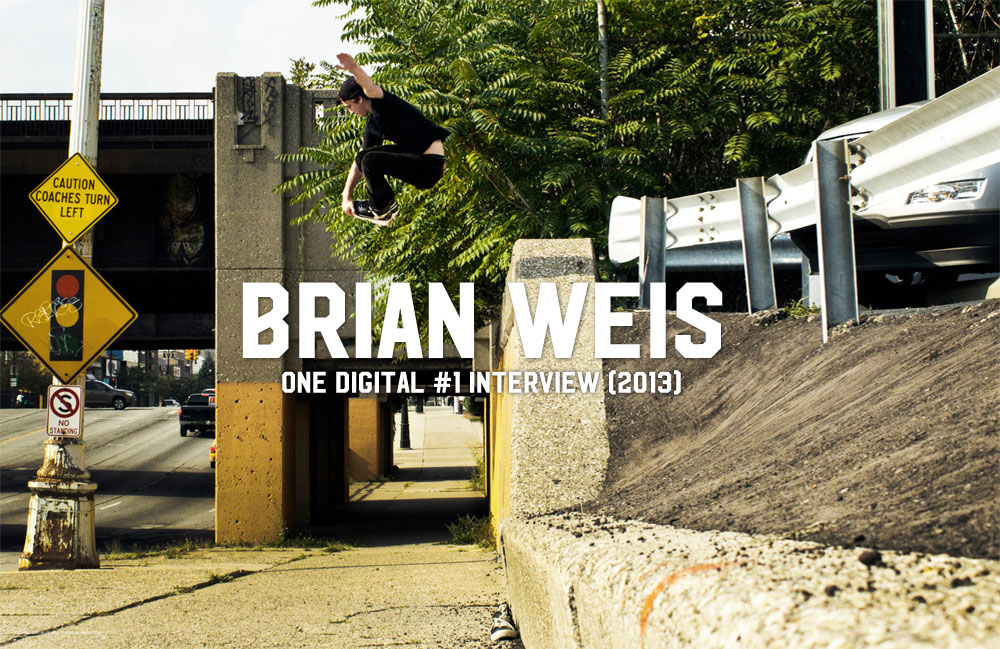 The city of Detroit has made more contributions to blading than I can name right now. It’s known for producing some of the rawest bladers in the sport, a rawness reflecting the heart of an old industrial world that is the Big D. But among these enduring roots a new blader has risen to represent the city’s next chapter through his personality, lifestyle, and work ethic. From the light beer and whiskey he drinks, to the American cars he drives and even the classic rock he blasts, this skater is the heart of his city and its blading.

This is Brian Weis. 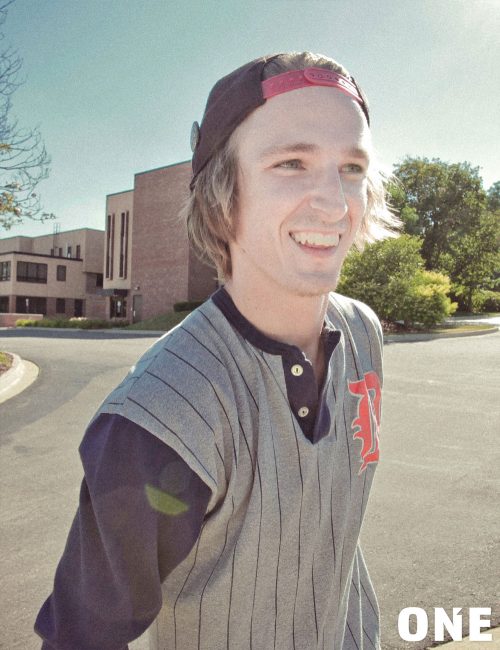 What is your relation to Ben Weis? Ha! Just kidding. How old are you and where are you from?
I’m from Madison Heights, Michigan. I’m 24, and I skate for SSM. That’s about it.

How long have you been blading, and who are your sponsors?
I skate for SSM, I get frames from Create Originals, get hooked up from Lowlife and Haunted Wheels, and I’ve been blading for about 14 years.

You recently recovered from a head injury. What was the situation, and how is your recovery coming along?
Uh… I fractured my skull in two places and had some bleeding in my brain. I was gapping to royale on this thing but stuck on the landing then fell back and hit my head. Yeah man, I was only out for a little while. It ended up not as bad as it could have been, so yeah, I’ve been skating recently. This happened around the end of may, and I started skating again prob- ably around the end of July or beginning of August. But yeah, every- thing’s good, no worries.

Was gonna say, I noticed that it hadn’t seemed to impact your sense of fear — or at least it didn’t seem to in your recent edits. In fact I would say you did bigger stuff in that than ever. How has the injury affected you in that way, and elaborate on your deci- sion not to wear a helmet?
Ah, the fear thing. I don’t know… I look at it kinda the opposite way. I’m not gonna let that injury decide what I do, ya know? It was an accident, and I’ve been doing this so long.The chance of it happening in the rst place is crazy, and the chances of happening another time are crazy too. I’m not saying I go out and skate the same way exactly. I de nitely need to pick and choose more, and not rush things like I did before. But I de nitely think of the other way — it’s like I almost died. There was a 50% chance of that, so I’m just happy to be blading.

Is that the same spiel you gave your girlfriend?
Ha ha, oh yeah the old lady didn’t like that. I think it scares people. A lot of people get weirded out that I don’t wear one, but I don’t know man… I don’t re- ally think about it. 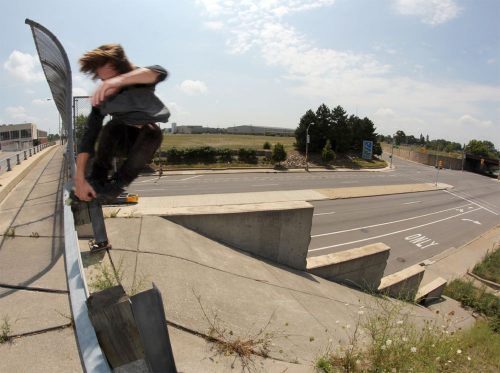 How did you get together Shima Skate Manufacturing? How is the relationship with the company/team?
I ended up going to CA a few years ago, right when Nimh was done, and Brian was like gonna start something. I was in Oakland with Nick Norton to hang out and lm, ’cause I’d just graduated from school and had some money. I was like “fuck it dude I’m just gonna go skate for a while.” So I went out to Oak- land a few times and just shredded with all those dudes. But I don’t know, man, Jon and Shima liked my skating and wanted me to be a part of it. So that’s how that happened. But yeah, the company’s fuck- in’ sick, man. We’re homies and it’s cool; we all like the same shit, and we all are in it for the same reasons, ya know. We all get each other.

Everybody has jobs, girlfriends, etc… Due to the daily grind, how often do you get to blade, on average?
I just moved closer to the city —I’m in Madison Heights right now, ’cause it’s on the outskirts of Detroit — and now I skate every day, ’cause there’s a lot of parks, like, a lot of free parks and shit, less than three miles from me. I pretty much try to skate every day, but before moving here it was kinda tough ’cause I had a 45-minute+ drive to get anywhere from my parents’ house. These days I try to skate every day when I get out of work. Might not be for a section or anything, but yeah, try to get out every day.

You recently moved back from your “college town” Kalamazoo to your home side of the state, Detroit. How has the relocation impacted your daily routine/blading?
Kalamazoo is kinda hilly and everything is kinda concentrated. In Detroit, there’s so many different cities in the metro area, you kinda gotta pick and choose which side of the city you wanna go to; know what I mean? And Detroit is pretty at compared to Kalamazoo, but I don’t think it’s affected my blading any. I just want to skate cool, fun shit, so it really hasn’t affected that, but its definitely a little different.

Who were your biggest influences growing up, and what/who in- spires you these days?
Shit, man, back in the day it was Brian Murphy, Jake Rose, Don Bambrick… those three dudes pretty much, as far as local guys. They were definitely the biggest influence on my skating and kinda helped me get to where I am, ya know. But now let’s see… biggest inspiration… all the Shima dudes are killin’ shit and, uh, I don’t know. That’s about it, dude.

Can you name one old school head you were influenced by?
I think Shima and Elliott, pretty much, and I know that’s cliche and every- body is gonna think like, ’cause I skate for Shima that’s what I’d say, but seriously, Shima was always one of my favorite bladers. I just like his style. Like Bmurph, they both skate so solid and fast, and that’s kinda my shit. That’s what I like. And it’s how I skate, so definitely Shima, for sure, and Elliott.

There was a point where you were riding for Sixwonsix; what was your favorite part about that time in your blading?
SWS was sweet, dude. My favorite part was Mikey Blair. We skated for ’em, but I lived in Kalamazoo and Mikey lived in Grand Rapids, and Mark’s ware- house was in a pretty nearby area, so we were able to be involved and always skating the warehouse, or around to help Mark with stuff. Mikey and I being able to skate for the same company was cool too, so pretty much like that man — being able to be right there and being involved. We were close enough to be able to do shit together and make shit happen.

What was it like the first time you ventured out west to California — the promised land — to blade?
It was fuckin’ awesome, man. It was pretty short, but it was sweet. Hopefully I’ll make my way out there for at least a little while in the future, but I’m kinda stuck here for about a year, though when I get back I want to stay for awhile. There’s skate spots everywhere, the weather’s perfect… it’s perfect dude, no other way to put it.

Watching your old profiles, I can honestly say your style hasn’t changed dramatically, though you can tell a lot more thought is put into your blading. What are your thoughts on style? Where do you see your style of blading going in the future?
I don’t really know man, I think style is like a natural thing. I don’t think it’s something you can visualize how it’s gonna go. It should just happen. It can depend on a lot of things: where you live, what you have to skate around you, who you skate with, but yeah, I think style is very important and one of the most important things. Most people who have natural style, they just do their own thing. Like there’s no influences — I mean, there’s influences, but they just do it in their own way.

Being a college graduate and a full-time blader, and full time- worker, what are your thoughts on balancing everything — life in general I guess? Do you have any advice for the youngsters?
As I get older, balance is key. If you have balance, like, for me, going to work makes blading better. I don’t know if that makes any sense, but I don’t just get to blade all the time, so when I go to work it makes blading better ’cause I’m enjoying the time I have to do it. Because maybe I can’t skate for a couple days because I have to do some shit, so I have to take advantage of it when I can. Keeping things in balance makes everything better, so I always try to be busy and always trying to be doing something.

Do you have any current projects in the works, or any more trips planned?
Right now, nothing. Just trying to skate as much as I can, lm and take any opportunity I can to hang out with cool people that skate and dig the same shit I do.

Any thanks?
Thanks to you dude, Shima, Al for shooting photos, Mathias St John, Create Originals, and whoever I mentioned earlier.